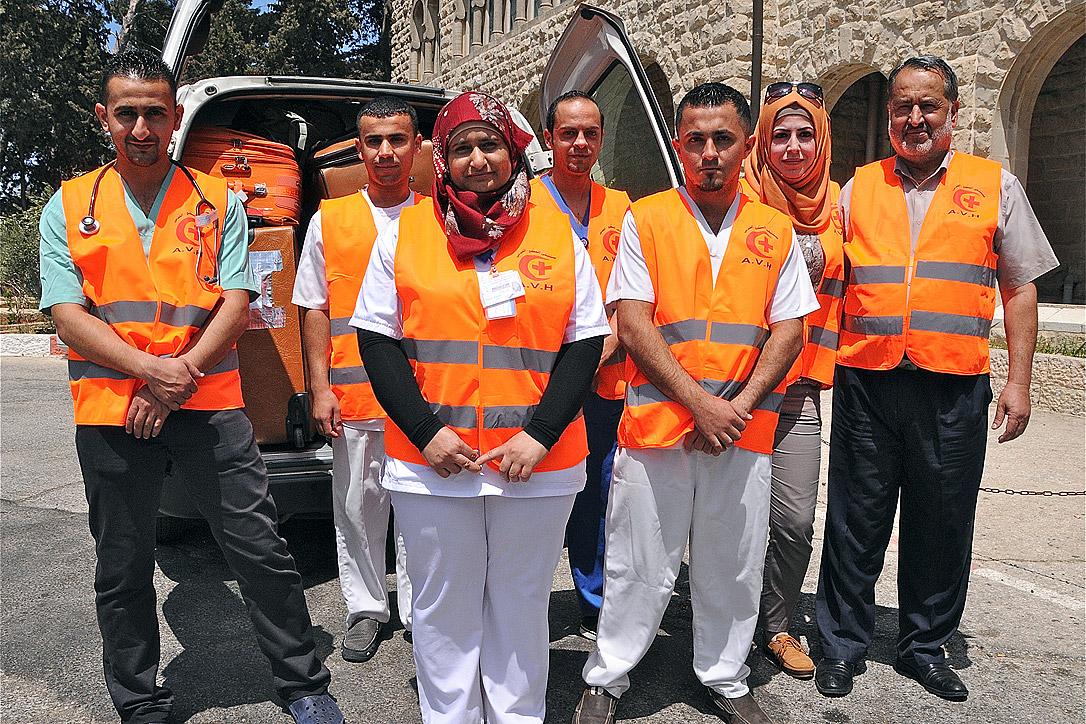 (LWI) - “Heavy engagement, shelling, bombing.  We are attending to 11 severely injured casualties in the ICU at Nasser Hospital but cannot move them anywhere.  It is too dangerous” Dr Tawfiq A. Nasser, Chef Executive Officer of the Augusta Victoria Hospital (AVH) in Jerusalem relays a report from Gaza. By the beginning of the week, The Lutheran World Federation (LWF)-run AVH had sent two volunteer medical teams, totaling six doctors and six nurses, to Gaza to care for the increasing number of people injured in the ongoing conflict with Israel.

“Sending the medical teams to Gaza is part of the hospital’s service to the Gaza Strip. This action comes in response to the extreme needs identified by the medical staff in Gaza and rises out of AVH’s determination to serve the injured due to the Israeli shelling and bombing,” Nasser said, adding that reports from Gaza indicate that many people have sought refuge at hospital grounds in the Gaza Strip, as these are considered to be the safest places in the city.

Refugees and Injured Crowd the Hospital

The people seeking shelter add even more pressure to the hospitals’ capacity. “The hospital grounds are full of tents and make-shift houses.  It is the safest place in the city.  People keep arriving.  I do not know how much more the hospital can hold.  It is one big refugee camp,” the AVH medical team writes from Gaza.

“There are people sleeping all around us in the hospital, on the floors, in the corridors, homeless, hopeless, with no families.  Volunteers in the hospital do nothing but mop spilt blood covering the floors.  The smell of blood is the only odour. The atmosphere is overwhelming as you encounter the massive stories of sorrow, pain and loss,” Nasser further relates the situation in Gaza as described by his team, which is working under stress and very difficult conditions. All forms of infrastructure - including electrical stations, schools, hospitals, water and sewage systems, and homes - have sustained damage.

“We started feeling the pain and agony around us and we cannot escape it.  A child is sleeping on a piece of cardboard next to his father who is severely injured,” one of the medics writes. “Every time I pass, the child is asleep but peaking an eye on his dad to make sure that his dad is still next to him and alive.  The child does not want to become an orphan and be left alone”.

The AVH team includes specialists in emergency medicine, intensive care, surgery, internal medicine and pediatrics, with accompanying specialty nursing.  The team also brought in much-needed medical supplies and medicines. Five hospitals and 34 clinics have been shut down in Gaza due to the insecure situation. The AVH is planning to send at least 10 missions to Gaza in the next three months. More than 9,000 people have been wounded in the conflict.

“Recently, due to the prolongation of the war, it was clear that the medical teams working in Gaza were overwhelmed and in need of assistance. When a brief window opened up due to a humanitarian ceasefire on 1 August, AVH rapidly responded to this need by sending a team from AVH,” said Department for World Service Regional Representative in Jerusalem Rev. Mark B. Brown.

“Reports from the field indicate that the healthcare system in Gaza is collapsing and the medical teams there are unable to cope with the number of war casualties.  Even with all the significant amounts of supplies and technology that may eventually arrive into Gaza, the healthcare system will not be able to respond without adequate human resources,” he added.

The AVH, which receives and treats cancer patients from Gaza on a regular basis, has also prepared a department with 12 additional  surgical beds and 4 ICU beds to serve injured casualties and cancer patients trapped in Gaza, whose medical conditions are worsening. The hospital predicts that it will take six months to bring Gaza cancer patients who missed treatment back to a normal routine.

The LWF is calling for donations to sustain the support to victims of the Gaza conflict.

A pioneer in cancer treatments for Palestinians
news