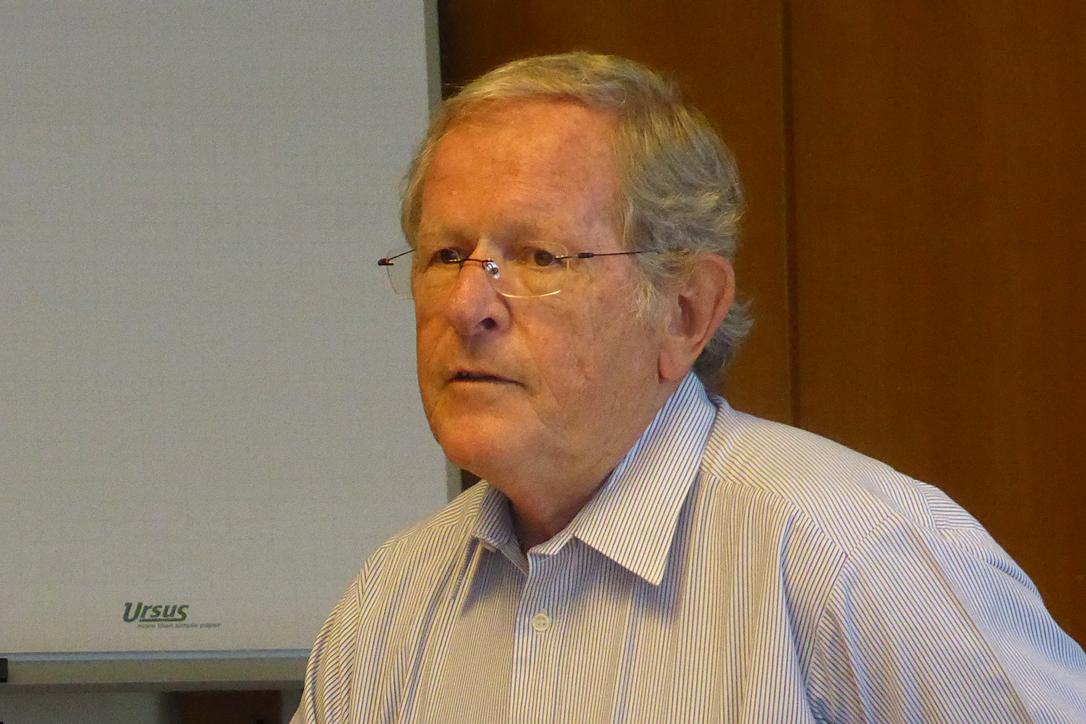 (LWI) – Mr Harmut Diehl says he looks back with deep gratitude at the generous solidarity from the global Lutheran communion to thousands of Namibians, still slowly recovering from the devastating drought between 2012 and 2013.

Diehl made these remarks recently in Geneva, when he addressed staff of The Lutheran World Federation (LWF) on the impact of the joint drought intervention by the LWF and the three Namibian Lutheran churches, which he coordinated as a volunteer between September 2013 and May 2014.

The drought affected around 800,000 people, who faced a shortage of basic food, diminishing pastures for their livestock, and reduced availability of water for domestic use. Crop harvests were down 42 percent from 2012 and 4,000 livestock had died.

He said appreciation for the emergency cash transfer program (CTP), which involved payout of 100 Namibian dollars (USD 10) per family member over the nine-month critical period, was expressed by several beneficiary families. Some 4,500 vulnerable people in four communities were able to purchase food, medicine or goats to boost their livestock, pay school fees and buy uniform for their children, among other basic needs.

Citing a monitoring visit earlier this year to Amperbo, 300 km north of the capital Windhoek, Diehl told the story of one woman who explained how the 100 Namibian dollars had helped her “pay her debts, buy food for the family, catch up on contributions to the church, and even managed to save enough to buy a goat so that she could increase her herd.”

In Windhoek, an 84-year-old woman pensioner taking care of her four orphaned grandchildren said the additional 200 Namibian dollars two of the youngsters received under the CTP enabled her “to give the children three meals a day,’” Diehl noted.

The CTP also provided learning opportunities, the coordinator explained. One of the reasons why there was huge acceptance of the program was its criteria of targeting the most vulnerable people in a community irrespective of their faith affiliation. “It was important that anybody could qualify irrespective of church membership,” Diehl noted.

Concerns had been raised about potential resistance to the program’s choice of women as the cash recipients in a society that considers the man as the head of the family. “Throughout the implementation period, there was huge acceptance of the woman’s role as the one who would take care of the needs of the family,” Diehl said.

In a political context that opposes cash handouts with the argument that they encourage laziness and alcohol consumption, the CTP did not receive support from the government, which was distributing food to those affected by drought. “But in our monitoring, we did not come across any case of alcohol abuse from the beneficiaries. In fact, many of the village chiefs gave strong support for the program,” he noted

The churches appreciated Nampost’s support and collaboration with the Namibian Red Cross Society, Catholic Church agency CARITAS, and the United Nations Office for the Coordination of Humanitarian Affairs (OCHA), Diehl said. “We must nurture these relationships to learn and share experiences, problems in preparedness for future emergencies such as droughts and floods, as these will happen again.”

This was the first time the three Lutheran churches had worked jointly on an issue of mutual benefit for the communities, Diehl said. “It helped to affirm the value of unity under UCC. “This is especially important as the churches start preparations for hosting the 2017 LWF Assembly in Windhoek,” he said.

The churches also decided to maintain the steering committee for the CTP, with the aim to follow up on membership in ACT Alliance.

Expressing gratitude to Diehl and to the Namibian Lutheran churches for their crucial role in the drought response initiative, DWS director Rev. Eberhard Hitzler noted that this was a good experience of anchoring LWFs diaconal work in the local churches.