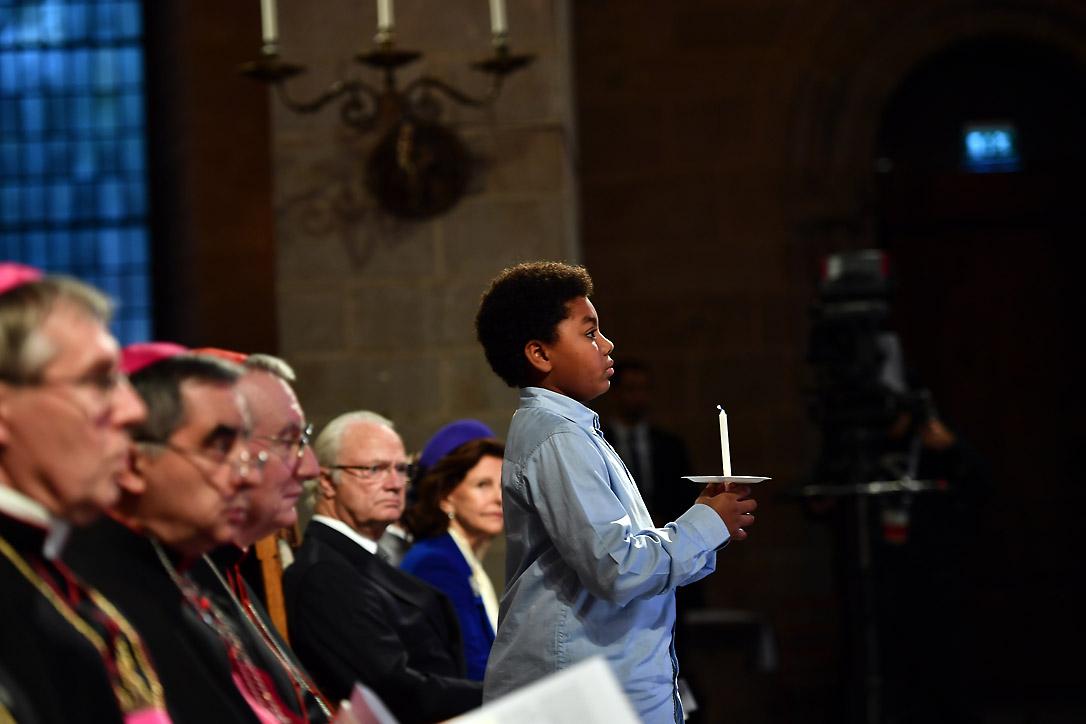 A commitment to move together in hope

(LWI) – Almost 500 years after the Reformation, which pitted Lutherans and Catholics against each other for centuries, leaders of the two traditions gathered in Lund, Sweden, to repent for past divisions and to commit themselves to common witness and service in the world.

Pope Francis and Kurt Cardinal Koch of the Catholic Church, and the President and General Secretary of The Lutheran World Federation (LWF), Bishop Dr Munib A. Younan and the Rev. Dr Martin Junge, embraced during a service of Common Prayer in the city's historic Cathedral, as they offered each other a sign of peace.

"With joy we have come to recognize that what unites us is far greater than what divides us," said the LWF President Younan, bishop of the Evangelical Lutheran Church in Jordan and the Holy Land, in words of welcome to the service on 31 October, the anniversary of the 1517 Reformation.

Held under the title, "From Conflict to Communion - Together in Hope," the first joint Catholic-Lutheran Commemoration of the Reformation at the global level followed 50 years of international dialogue between the Catholic Church and the LWF.

"Help us to rejoice in the gifts that have come to the Church through the Reformation, prepare us to repent for the dividing walls that we, and our forebears, have built, and equip us for common witness and service in the world," Pope Francis said in a prayer at the beginning of the service.

Spontaneous applause broke out as Pope Francis and Bishop Younan later signed a Joint Statement committing Catholics and Lutherans to deepen their communion and common witness for justice.

About 500 worshippers filled the Cathedral for the service, where they heard sermons in Spanish by Pope Francis and Rev. Junge.

Representatives from other Christian World Communions and from ecumenical bodies such as the World Council of Churches were present at the service.

This underlined, organizers said, that progress between Catholics and Lutherans cannot take place in isolation from their many other ecumenical relationships.

The liturgy included music from the Taizé Community in France, an ecumenical community of Catholic and Protestant brothers founded in the 1940s. There were hymns and prayers in many languages besides English, including Arabic, Aramaic, French, German, Polish, Spanish, Swedish and Tswana.

As the congregation together recited the Apostles' Creed, water was poured into a stone font placed in the center of the Cathedral, symbolizing the common baptism of all believers. Five candles were then lit by children to symbolize five joint commitments to grow in communion.

However, Catholics and Lutherans are still separated by being unable to celebrate the Eucharist, or Holy Communion together, and the prayers included an appeal to God to "bring us together at your eucharistic table."

Lutherans and Catholics in the past often focused on what separated then from each other rather than looking for what united them, said Cardinal Koch, President of the Pontifical Council for Promoting Christian Unity. "Their failures resulted in the deaths of hundreds of thousands of people. We deeply regret the evil things that Catholics and Lutherans have mutually done to each other."

LWF General Secretary Junge also offered words of repentance: "In the sixteenth century, Catholics and Lutherans frequently not only misunderstood but also exaggerated and caricatured their opponents to make them look ridiculous."

Led by the cross of Jesus Christ

The service opened with a peal of bells after which the Catholic and Lutheran leaders entered the Cathedral in a procession with a painted cross carried at the front that depicted God’s creative, reconciling and sanctifying work. Salvadoran artist Christian Chavarria Ayala created the cross for the event.

One of the key milestones on the path to the Lund commemoration was the Joint Declaration on the Doctrine of Justification, signed by the Catholic Church and LWF in 1999. This was followed by a 2013 Lutheran-Catholic report, "From Conflict to Communion," in which Lutherans and Catholics looked back on the Reformation and formulated joint commitments for the future.