The long road to public recognition 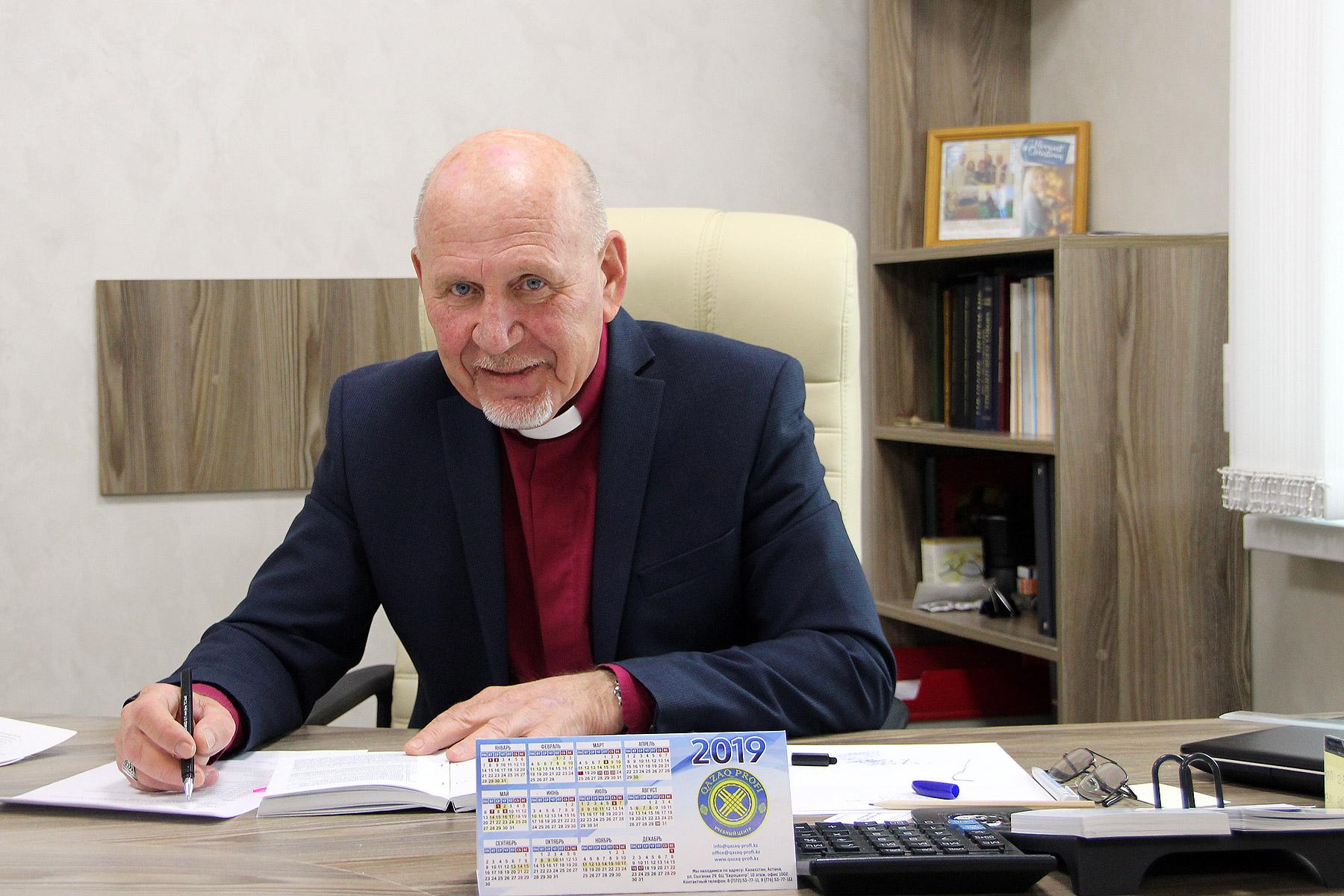 Yuri Novgorodov, Archbishop of the Evangelical Lutheran Church in the Republic of Kazakhstan. Photo: LWF/A. WeyermÃ¼ller

Interview with Yuri Novgorodov, Archbishop of the Evangelical Lutheran Church in the Republic of Kazakhstan

(LWI) - Since 2005 Yuri Novgorodov has been the bishop of a church that has been fighting for its right to exist and for recognition in the society of Kazakhstan for a long time. Strength of faith and perseverance are two important qualities that accompany this path and will remain important in the future.

In this interview with Lutheran World Information, the Archbishop talks about his church, ecumenical cooperation and international solidarity.

Please introduce us to the Evangelical Lutheran Church in the Republic of Kazakhstan and its context.

Most of the Lutheran congregations in Kazakhstan can be traced back to about one million ethnic Germans who were deported here from Western Ukraine, the Caucasus and the Volga region from 1939 onwards, during the reign of Stalin. Assemblies of believers were strictly forbidden. Nevertheless, they met secretly underground, mostly in private houses. It was only in the 1950s and 60s that the pressure on religious communities slowly eased.

The congregations gathered in so-called houses of prayer. These were mostly private dwellings or houses that were gradually rebuilt to accommodate the congregation gatherings . But our society expects recognizable meeting places. And because ours were often hidden or unobtrusive, we were called "German sect."

It was not until 2000 that the Kazakh state recognized the Lutheran church as a traditional religion, i.e. a religion linked to the history of the country. Since 2017 we finally have a building in the capital Nur-Sultan that was planned and built as a church. This was a major step for our perception and recognition in society.

Another step towards opening ourselves to society that we had taken in 1993 was the decision to hold our services in Russian. In my opinion, this decision came 20 years too late. Until then, our meetings had been held in German, which contributed to our isolation. This decision turned the church from a mono-national, closed church into a Christian multinational church, open to society, ready for dialogue and cooperation with other churches and society.

We turned our church into a Christian multinational church, open to society, ready for dialogue and cooperation with other churches and society.

There is a new development; an agreement signed by the Lutheran, Roman Catholic and Russian Orthodox churches in Kazakhstan. What is this document about?

I am immensely proud of this agreement, which we signed on 13 May 2019. All three of the churches involved are diaspora minority churches, as they are traditional Christian churches in a predominantly Muslim country.

In the document, we commit ourselves to treating each other respectfully. None of the three churches should speak negatively about the other churches. We want to meet regularly and deepen our cooperation.

In our society we also want to speak with one voice in consultation processes on proposed state laws.

What does it mean for your church to belong to the Lutheran World Federation (LWF)?

Being part of a global family strengthens our position here in Kazakhstan. It makes us aware that we are not alone, and that Lutheran brothers and sisters pray for us. In addition, we have already received much support for our congregations from abroad.

In our Kazakh society it is important that we can point out that we are part of an international religious organization. This gives us recognition in the eyes of the state.

I am also grateful for the international dialogues that the LWF conducts with the Catholic and Orthodox churches, thereby contributing to our mutual understanding. Also, the LWF’s work with and for refugees means a lot to us. Taking care of people in need is a great task for Christians worldwide.

An internationally outstanding event in Kazakhstan is the Congress of Leaders of World and Traditional Religions. How are you involved?

The former President of Kazakhstan Nursultan Nazarbayev founded the Congress in 2003, and it has taken place every three years since. He wanted to take a stand against religious extremism and acknowledge the diversity of religions in Kazakhstan. I attended the congress for the first time in 2003.

The LWF has taken part in the congress since its inception. In 2003, 2006 and 2009, the LWF was represented by the then General Secretary Ishmael Noko; in 2012 by LWF General Secretary Martin Junge; in 2015 by the former LWF President Munib Younan; and in 2018 by LWF Vice-President Urmas Viilma. During his visit to Kazakhstan in May, Martin Junge asked me to continue representing the LWF in the Congress Secretariat, which I have been very happy to do since 2004.

The secretariat prepares the congress meetings, which is an exciting and at the same time complicated task. The negotiations on international participants already make this clear. For example, unlike Kazakhstan, Arab countries have no clear separation between state and religion. And, there are many potential sensitivities: the president invites religious leaders from countries with political tensions amongst them. Nevertheless, even if not all the participants speak directly to each other, they are gathered in one room around one table and see each other. This is a great step and an important symbol of peace.