“Let trauma victims experience as much security as possible”

How can we end gender-based violence, and how can we become a more gender-just communion? These questions were raised at the recent meeting of the Network for Gender Justice and Women’s Empowerment in Central and Western Europe. 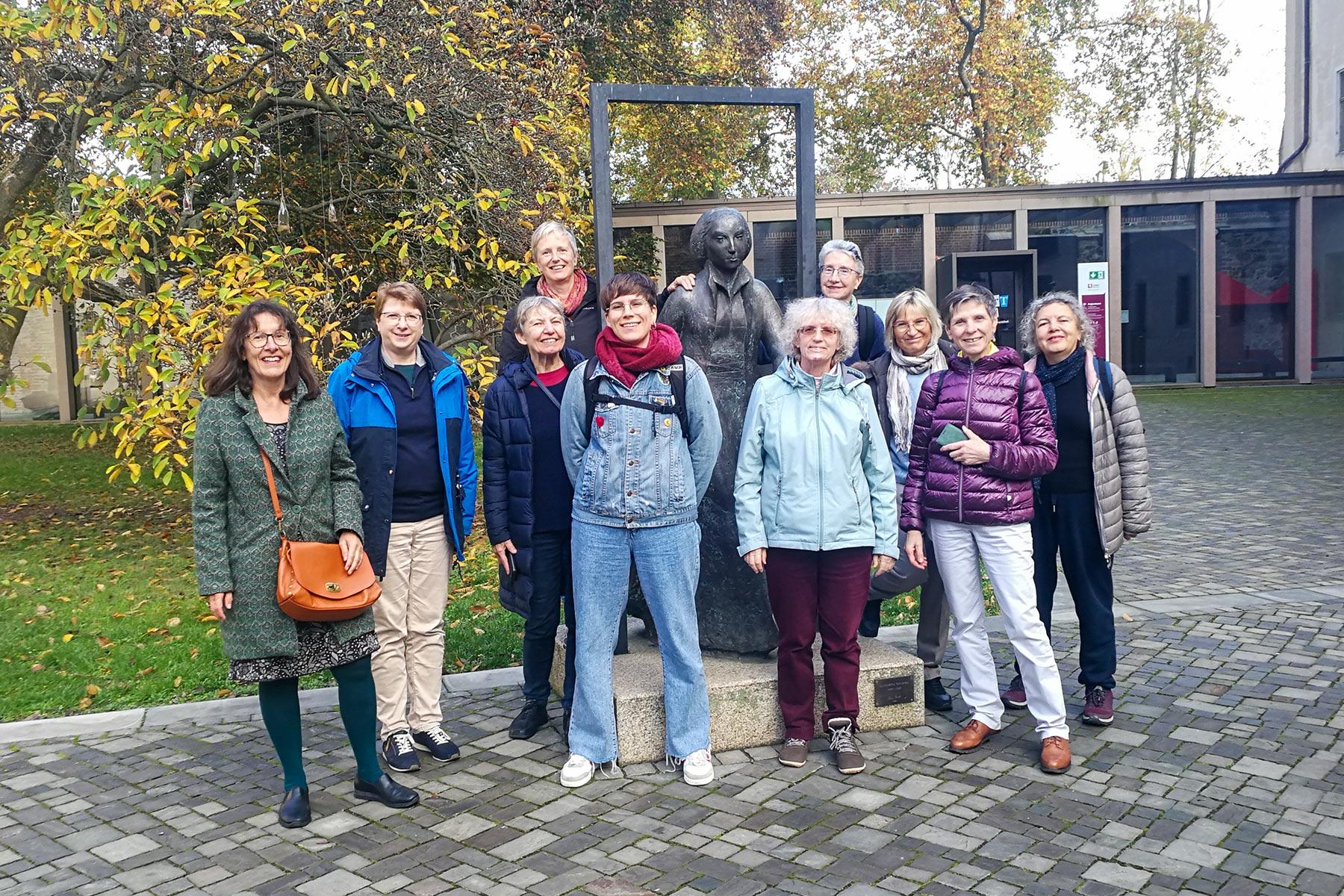 Participants of the Network for Gender Justice and Women’s Empowerment in Central and Western Europe at the Katharina von Bora statue in Wittenberg, Germany.

(LWI) – “Theological challenges in the face of gender-based violence” was the title of the keynote address by Rev. Dr Elke Seifert at the last meeting of the Network for Gender Justice and Women’s Empowerment in Central and Western Europe.

“It is the Christian community’s primary task to let trauma victims experience as much security as possible, offer the most secure bonds possible and accompany them in their search for God – if the person wants to go on that search,” she said. However, she pointed out that several theological, pastoral and therapeutical challenges must be overcome along the way.

“Victims of violence, particularly gender-based violence, often feel guilty,” Seifert said. “This feeling has nothing to do with the factual situation because the offender alone bears responsibility for the act. Nevertheless, this feeling of guilt is real.”

Victims’ self-blame can be part of their survival strategy. Understanding the supposed logic of a catastrophe is an attempt to prevent it from happening again. “This illusion can make reality more bearable,” Seifert said.

“How guilt is spoken of in many church contexts hardly ever takes note of unjustified feelings of guilt,” Seifert has noted. “Generally, we are made aware of the fact that we are guilty and that we should recognize this. This realization is the prerequisite for understanding and appreciating God’s salvation through Jesus Christ.” The “salvation from evil” and the “salvation of guilt” are closely related. Seifert elaborated that victims of gender-based violence often feel inadequate and in need of salvation. “But not because they have done something wrong. That calls for a different approach to redemption than the common theological pattern.”

Victims of gender-based violence often feel unworthy – even before God. To reduce these feelings of shame or perhaps even leave them behind, “it can help people to (re-)discover their beauty and God-likeness,” Seifert added.

“It is the Christian community’s primary task to let trauma victims experience as much security as possible,” said Seifert, “offer the most secure bonds possible and accompany them in their search for God – if that person wants to go on that search.”

In this context, the concept of God is of vital importance. “A God who looks at the suffering person from afar is of little help to those suffering,” said Seifert. “But a God touched by people’s suffering, who mourns, and weeps with them, is different altogether.” We need to find God “in solidarity and support on the side of the suffering.”

Most trauma victims experience the feeling of “being different”, “disconnected”, and being misunderstood and therefore living in isolation. “Accordingly, they long to be in relationship and re-connected.”

“In their spirituality, some affected people prefer to replace personal images of God with abstracts: God as a power of life, God as healing light (at the end of the tunnel), God as a fountain, etc.”

Generally, noted Seifert, “the dominance of male images of God and pronounced Christocentrism make accessing the sources of strength of the Christian religion difficult for many survivors.” Nevertheless, she saw “entry points in our Biblical tradition for people with difficulty accessing the divine” and called for “these treasures of the Bible” to be lifted.

God needs to be found in solidarity and support on the side of the suffering.

Seifert’s keynote address formed part of the consultation of The Lutheran World Federation (LWF) women’s network in Central and Western Europe. Members from Austria, France, Germany, Italy, and the Netherlands gathered in Wittenberg, Germany, from 25 to 28 October to discuss “Gender relations and theology in the context of gender-based violence in the church”.

“We aimed to analyze power relations and dependencies and critically reflect on interpretive traditions in the Lutheran churches,” said Kathrin Wallrabe from the Evangelical Lutheran Church of Saxony, Germany, who coordinates the network. “We also looked at preparations for the Thirteenth Assembly next year, reviewing current and identifying further pathways for a gender-just communion.”

The 16 Days of Activism for ending Violence Against Women and Girls is an international awareness-raising campaign that runs each year from 25 November, the International Day for the Elimination of Violence Against Women, to 10 December, International Human Rights Day. LWF cooperates with ecumenical and other partners to achieve this goal and encourages its Member Churches and Country Programs around the world to creatively engage with the 16 Days campaign.