Junge to Asian churches: Peace-building is our only choice 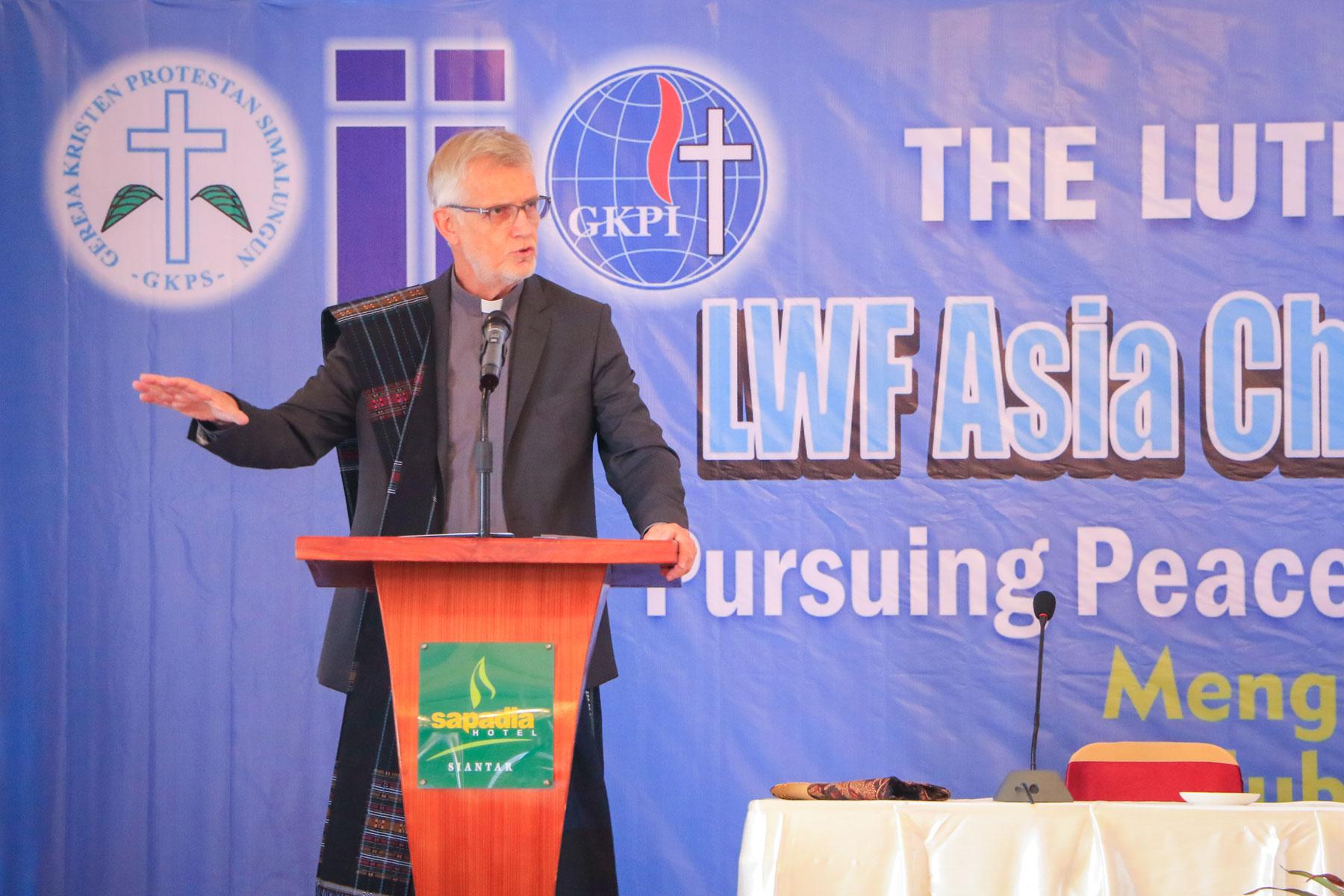 (LWI) - Each Lutheran church, however large or small, is called to engage in a “journey of equals,” sharing insights and experiences, while at the same time learning from congregations with very different cultures, traditions, spiritualities and “even theological profiles.”

That call to live and work more closely together as a communion of churches came from The Lutheran World Federation (LWF) General Secretary, Rev. Dr Martin Junge, at the start of the Asia Church Leadership Conference (ACLC) on 3 October.

The meeting, which brings together almost 200 lay and ordained leaders from across the region, is taking place in the Indonesian city of Pematang Siantar in North Sumatra. Participants are exploring the theme ‘Pursuing peace through interfaith relations in Asia,’ identified as an urgent priority for churches in the region.

Witness together as a communion

Bringing greetings from the global Lutheran communion, Junge warmly praised the commitment of churches in Asia to seeking peace, even in times of conflict and challenges. The task of peacemaking, he said, “begins within ourselves, within our own churches, seeking to live in peace with each other.”

Despite the rich diversity of histories, cultures and languages that make up the Asian region, the General Secretary said LWF member churches “have embraced God’s call to be one, to witness together as a communion” and to “encourage each other in God’s mission. Indonesia alone has over 600 languages and over 300 nationally recognized ethnic groups scattered across the archipelago’s 17,500 islands.

Stressing that he is attending the meeting to listen and learn about the way churches in Asia are living out their Lutheran identity, Junge urged all church leaders to stand firm in their foundational belief of “justification by grace through faith alone.”

LWF member churches “have embraced God’s call to be one, to witness together as a communion” and to “encourage each other in God’s mission.”

Despite the simplicity of this message, Junge said, we continue to “put conditions on God’s unconditional love, […..] to exclude instead of including” and to become “bodyguards of God’s sanctity and purity.” The call to ‘Come follow me’, he said, “doesn’t make us judges, deciding who is in and who is out, but shepherds to ensure that no one is lost.”

Don’t be pushed into divisions

Speaking of “the painful and recurrent experiences of conflict in churches,” he urged leaders not to be pushed into divisions, “not from within, nor from outside the church.” Christians should be known, “not for the way we fight, but for the way we carry each other’s burdens,” he insisted.

Pointing to the priorities of the LWF over the coming years, Junge announced the launch of a global network on theological education and formation. He also thanked LWF’s young people for leading the way in keeping climate justice as a priority for the churches, alongside the longstanding commitments to women’s empowerment.

Emphasizing that the focus on gender justice is deeply rooted in Scripture, he asked why is there still a “pervasive and systemic discrimination, exclusion and even violence affecting women, at times even in the church?” Noting the growing number of LWF member churches that ordain women and men, Junge continued: “What explains why female pastors receive less salary than a male colleague– if they are paid at all? Why exclude them from the ordained ministry?”

“LWF will always pursue women’s ordination, but never impose it,” Junge concluded. Though the last six Assemblies have reiterated the commitment of all LWF member churches to this issue, he said the decision about women’s ordination must come from the local churches themselves.

At a lively opening worship service, LWF Vice-President for the Asia region, Ms Desri Sumbayak noted that the ACLC gathering meets the LWF’s recommended quotas of 40 percent women and 20 percent youth delegates, an important step towards more meaningful participation of all members in the life of the church.

Sumbayak noted proudly that Pematang Siantar, the city where she was born and grew up, is known as one of the most peaceful and tolerant places in Indonesia, thus making it the perfect location for a conference on interreligious relations. Leaders of the six faith communities recognized by the government have been invited to the meeting, which will feature a keynote address from Prof. Syafiq Mughni, the president’s special envoy for dialogue and interfaith relations.

Read the Asian women's message to the ACLC