Jubilee of Lutheran – Catholic Dialogue Is a Time to Express Hope 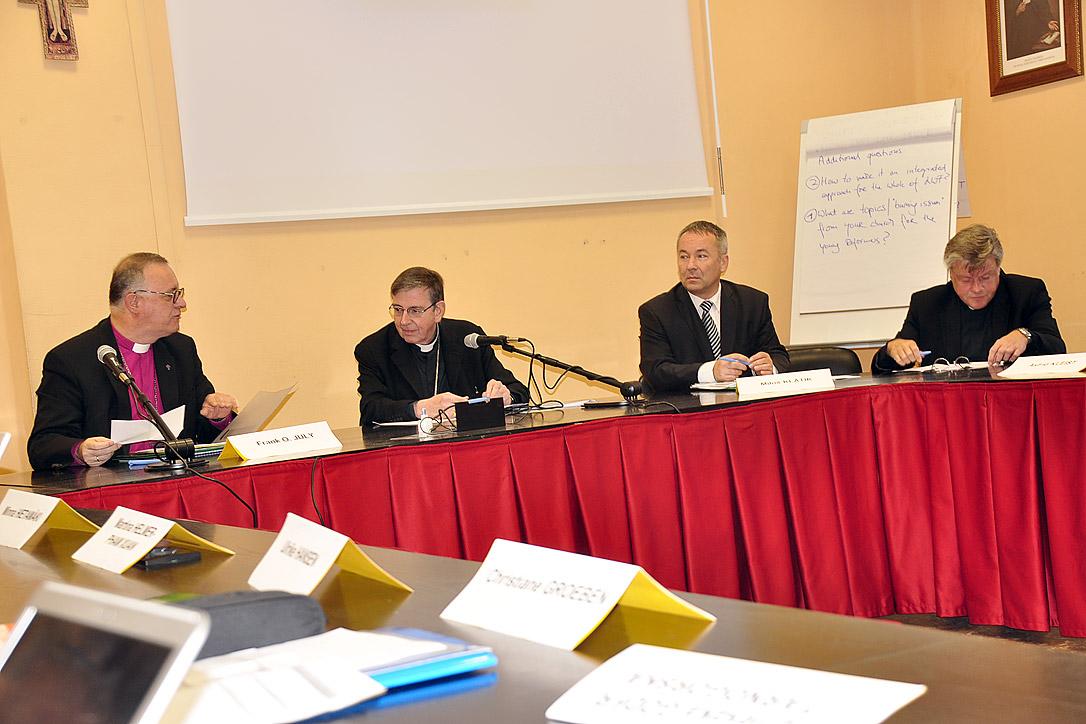 Participants at the panel discussion on the 2017 Reformation anniversary. Photo: Gerhard Frey-Reininghaus

(LWI) – Celebrating 50 years of the international dialogue between Roman Catholics and Lutherans in 2017 is a critical way of remembering  conflicts that started in Europe after the Reformation, and of expressing hope for deeper unity between both dialogue partners.

Kurt Cardinal Koch, President of the Pontifical Council for Promoting Christian Unity (PCPCU) made these remarks when he addressed leaders of The Lutheran World Federation (LWF) member churches in Europe, at their regional meeting in Rome, 27-29 October.

Speaking at a panel discussion on the ecumenical dimension of the 500th anniversary of the Reformation in 2017, Koch emphasized how important it is also for Catholics to reflect on what it means to commemorate the anniversary. “In the past, for example, the date of 31 October— the day in 1517 when Luther made public the 95 theses against indulgences—was used and perceived as anti-Catholic. Today, however, historians tell us that in 1517 Luther could still be considered a Catholic. This is an important point for us,” Koch said.

The PCPCU president then pointed out three main elements for an ecumenical commemoration of 2017 from the view point of the Catholic Church. First of all, that date will also mark the 50 years of dialogue between the Roman Catholic Church and the LWF. “The most significant expression of this dialogue was the Joint Declaration on the Doctrine of Justification [signed in 1999]. This is a document, which I hope, one day will be followed by a further joint statement on the church, Eucharist and ministry,” he said.

Secondly, in order to qualify as ecumenical, the Reformation jubilee should be a time of critical remembrance and of reconciliation in view of the memory of conflicts born out of the Reformation, Koch noted. The 2017 commemoration will also be a sign of hope about deeper unity between Roman Catholics and Lutherans. “Hope to witness together to the society of our time, the presence of God in the world,” he added.

The panel discussion, chaired by Württemberg Bishop Dr Frank O. July, LWF Vice-President for Central Western Europe, was also the occasion to present the preparatory journey of commemorating the Reformation and its ecumenical implications in three different countries of the continent—Sweden, where Lutherans are the majority, Poland, where Lutherans are a minority, and in Germany, where there is a substantial numerical balance between Catholics and Lutherans.

Wherever the debate, it is characterized by reception of the document From Conflict to Communion, prepared by the Lutheran - Roman Catholic Study Commission on Unity in view of 2017.

In Sweden, said Rev. Kristin Molander, head of the office for Ecumenical Affairs of the Church of Sweden, reflection is carried out by small ecumenical groups at the parish level with the express purpose of bringing the dialogue from the institutional and the academic dimension to the membership of the two churches.

Dr Iwona Baranevic from the Evangelical Church of the Augsburg Confession in Poland explained that in her country, the Lutheran church has taken the lead in promoting From Conflict to Communion, including its translation into Polish, and inviting representatives of the Roman Catholic Church to ecumenical events. However, she noted, more encouragement is required for official joint ecumenical initiatives to promote the document. She mentioned the November 2013 conference in Warsaw by Lutherans with Catholics participating and the latter’s request for 150 copies of the document for distribution to local parishes as some of the good examples.

Oberkirchenrat Norbert Denecke, general secretary of the LWF German National Committee, presented the website www.2017gemeinsam.de designed jointly by Catholics and Lutherans. The platform allows visitors to express comments, opinions and suggestions on From Conflict to Communion and the 2017 celebrations.