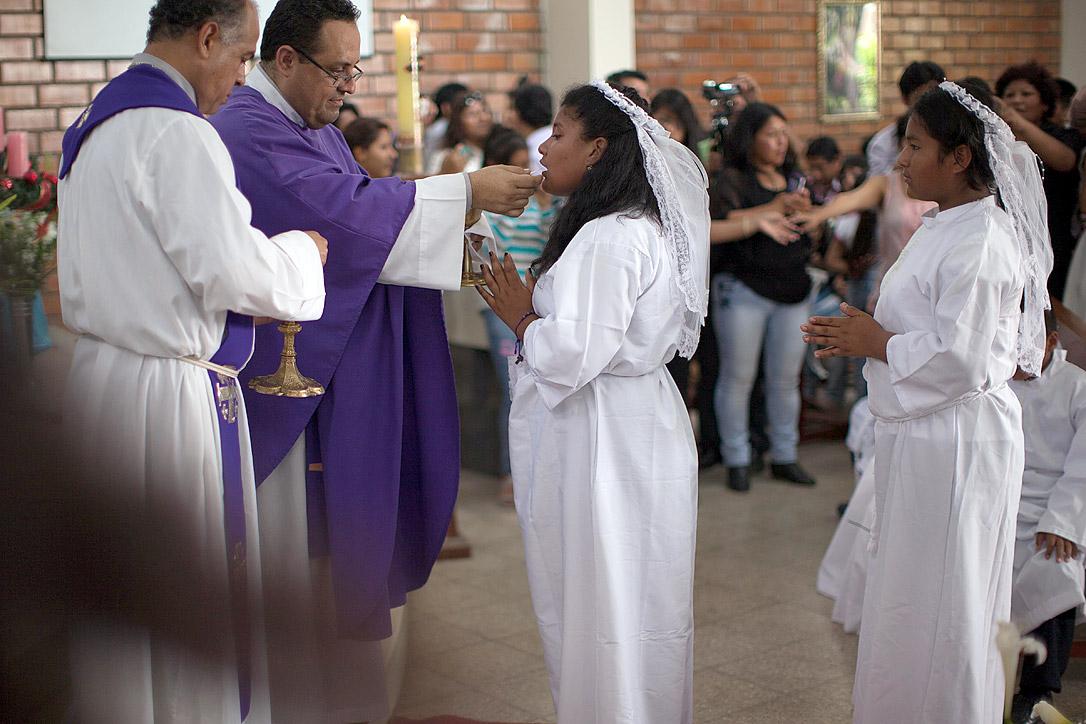 Lima Pastor and Priest Describe a Journey of ‘Grassroots Ecumenism’

In your own words, explain the main highlights and message of the First Communion for Catholic and Lutheran confirmands at San Juan de Miraflores last December?

We worked together with material provided by the Catholic parish for the First Communion because of their versatility and approach to the Peruvian reality and its various scenarios (family, neighborhood, individual situations, etc.). This was the beginning of the first steps of a mutual recognition by both parties, with plans for a more official recognition in the near future. The feelings of joy and satisfaction expressed by family members in the same celebration strengthened the relationship of a wider circle of neighbors: we became friends and friends of Jesus.

When did your collaboration as neighboring Catholic and Lutheran congregations begin and what are some of the activities that you carry out together?

We initiated our collaboration during the Week of Prayer for Christian Unity in January 2012. We wanted to do something that was beyond praying together and celebrate a joint Eucharist in every Catholic and Lutheran community. In the same week we visited each other. It was an unforgettable experience because the people on both sides wanted us to have more of such meetings. That encouraged us to cross the threshold of living together as an inter-confessional community toward a more liberating experience of the grace of God. The activities that we have carried out together in the community of Pamplona Alta include:

What specific significance did the global Lutheran-Catholic dialogue process have on your local initiatives?

The main impact for us is a new approach in breaking down barriers and prejudices that may block our fellowship. We can envision living a grassroots ecumenism. The justification document [JDDJ] has served our two churches and communities, and we are disseminating it even outside Pamplona Alta. It provides a secure platform for both churches to work ecumenically for the unity of the Church universal.

How does the recent document From Conflict to Communion relate to your ongoing collaboration, and what is the main message that Lutherans and Catholics in Peru want to share?

The document From Conflict to Communion was received with great joy by both parties here, as it expressed a wish to see our churches in a new relationship through dialogue rather than the imposition of unilateral triumphalism. This can serve to provide a common witness of faith and strengthen democratic dialogue spaces in the deeply fragmented social situation in Peru.

Looking forward to the 2017 Reformation anniversary, what can other Lutheran and Catholic churches learn from the ecumenical journey on which you have embarked?

As we move towards the 500th anniversary of the Reformation, we see the Week of Prayer for Christian Unity as an opportunity to celebrate not only in January [18-25 January] but also in the period until Pentecost especially here in the Southern Hemisphere. It helps us to reflect seriously on Jesus’ prayer “that all may be one” and to discern together how far we have taken this prayer seriously in our communities. Preparing for 2017 opens up opportunities for collaborative processes to strengthen more authentic and joint processes of dialogue and peace building in society.