LWF has served Syrian refugees and their hosts in Jordan for ten years. While many crises called for quick emergency aid, LWF's primary focus has been a sustainable and long-term approach to a life in dignity. 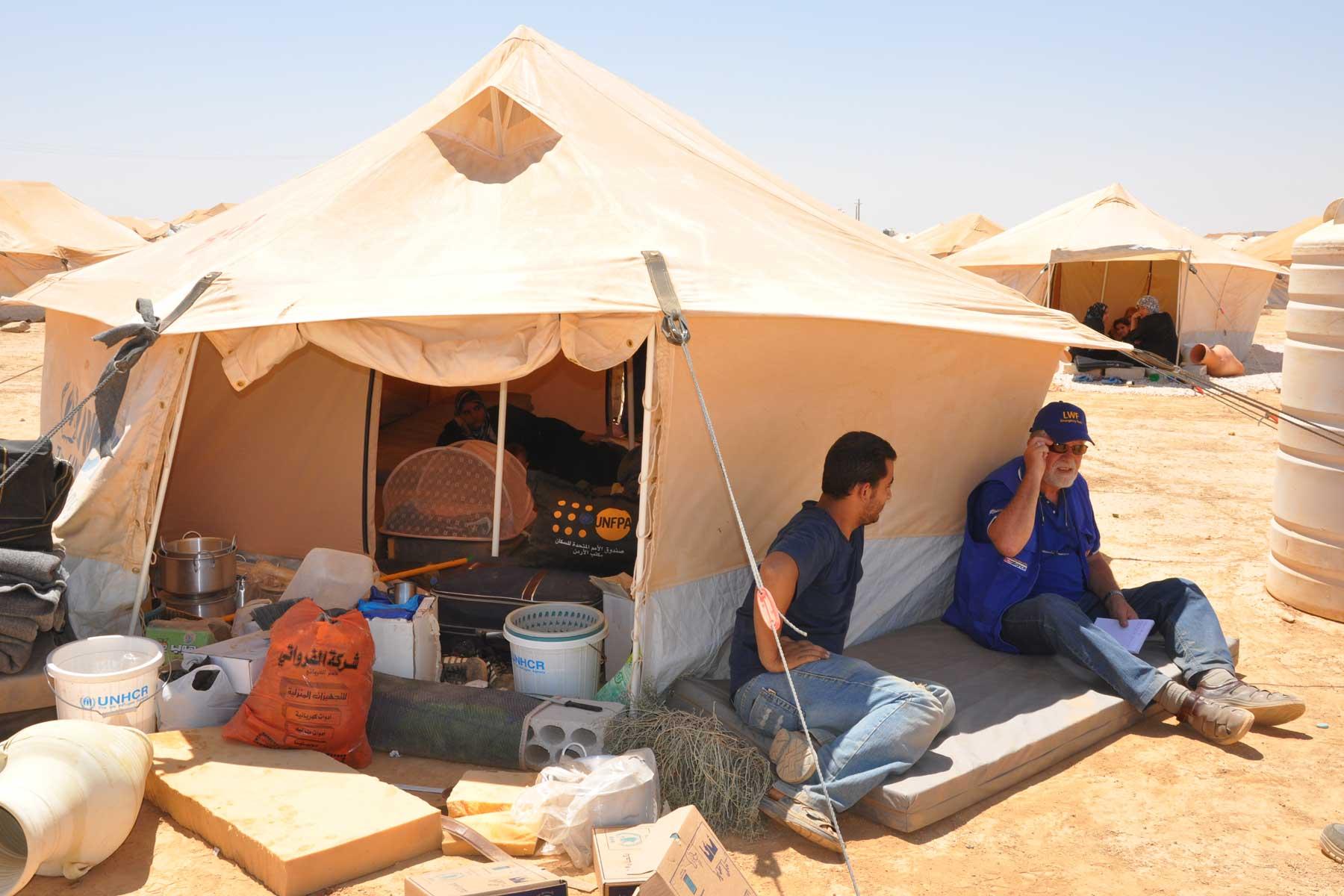 Transforming basic survival into a life of dignity

(LWI) - This year, LWF Jordan celebrates its tenth anniversary. LWF opened the program in response to the crisis in Syria. Initially set up as an emergency response in the summer of 2012, the program was registered as a new LWF country program in 2014. In the past ten years, the office has undergone many changes. One aspect has, however, remained constant throughout: the commitment to transforming basic survival into a life of dignity.

“By providing services and support to Syrian and Iraqi refugees and vulnerable members of the Jordanian host community, with a specific emphasis on women and youth, LWF Jordan has contributed to empowering communities across northern Jordan,” says Regional Program Coordinator Caroline Tveoy. 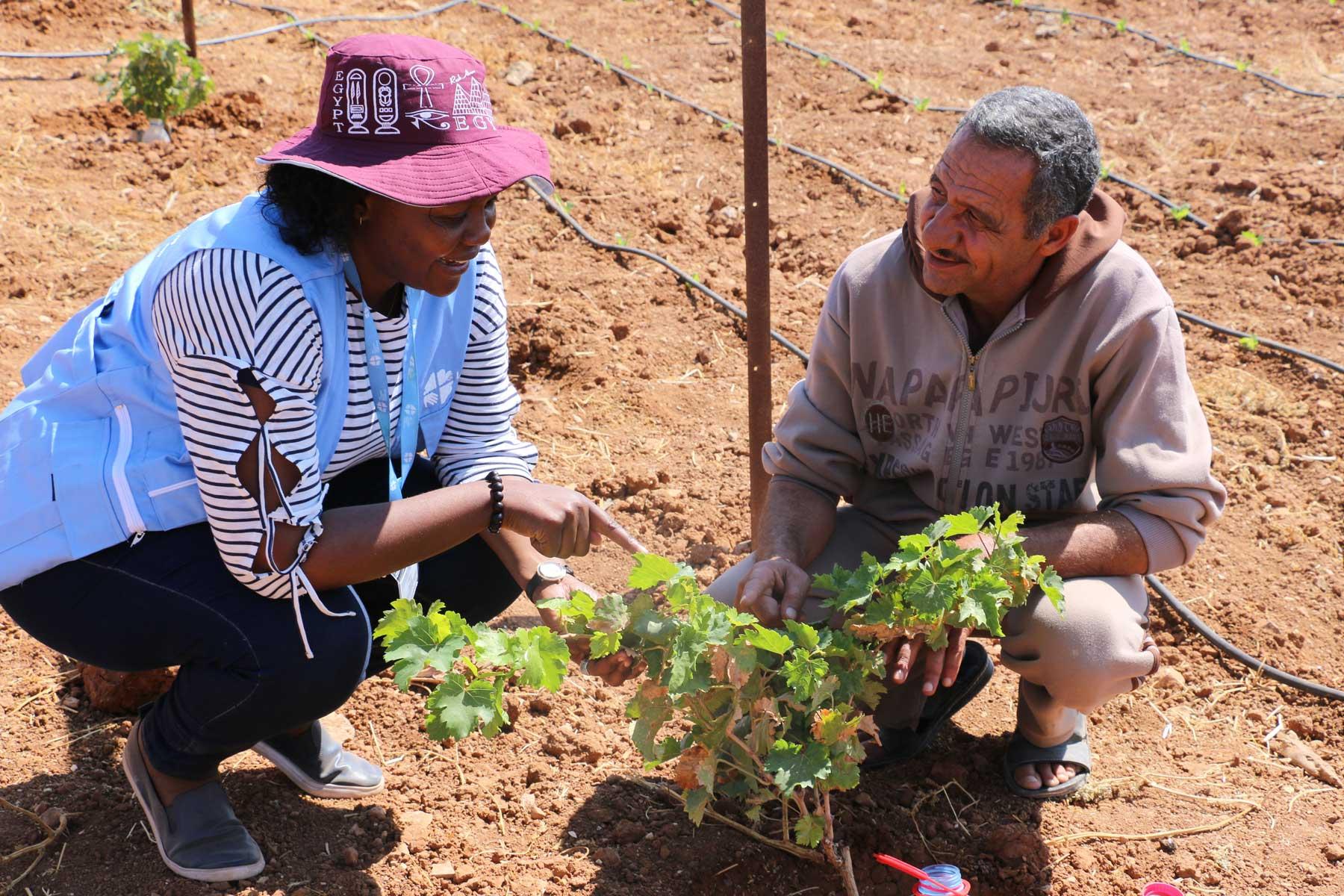 "In two weeks, we will be back in Syria”

LWF already had an LWF Jordan Country Program in 1949 – 1975, primarily to support Palestinian refugees. In 2012, shortly after the arrival of the first refugees from Syria, LWF responded to a call from its member church, the Evangelical Lutheran Church in Jordan and the Holy Land, to support Syrian refugees and vulnerable populations in Jordan.

Islam Shdefat, LWF Jordan Program Coordinator, has been involved in the humanitarian response to the Syria crisis since the arrival of the first refugees in Jordan in 2011. Working for another aid organization, she received people fleeing the civil war in Ramtha, close to the Jordanian-Syrian border. The first ones to cross the border were women and children fleeing Syria to seek protection, leaving behind beloved husbands, brothers, fathers, and grandfathers. "These women were eager to return home, not anticipating the length of the conflict," Shdefat recalls. "They used to tell me: 'In two weeks, we will be back to Syria."

Two weeks became eleven years, and the large refugee camps in Jordan have become small towns with schools, shops, and healthcare centers. "The reality that the war would not be over any time soon dawned on my colleagues and me a couple of weeks later when we saw the first barber shop open in one of the tents inhabited by the Syrian refugees," Shdefat recalls.

LWF adapted its work from a short-term emergency response to aid, which would benefit the people long-term. For example, cash programming and emergency distributions of relief goods were most important in the early phases of the Syrian civil war. This kind of help was again vital during the COVID-19 pandemic. From the onset of the crisis, however, LWF staff looked at what would be necessary if the refugees stayed longer than a few weeks - to them and their hosts. 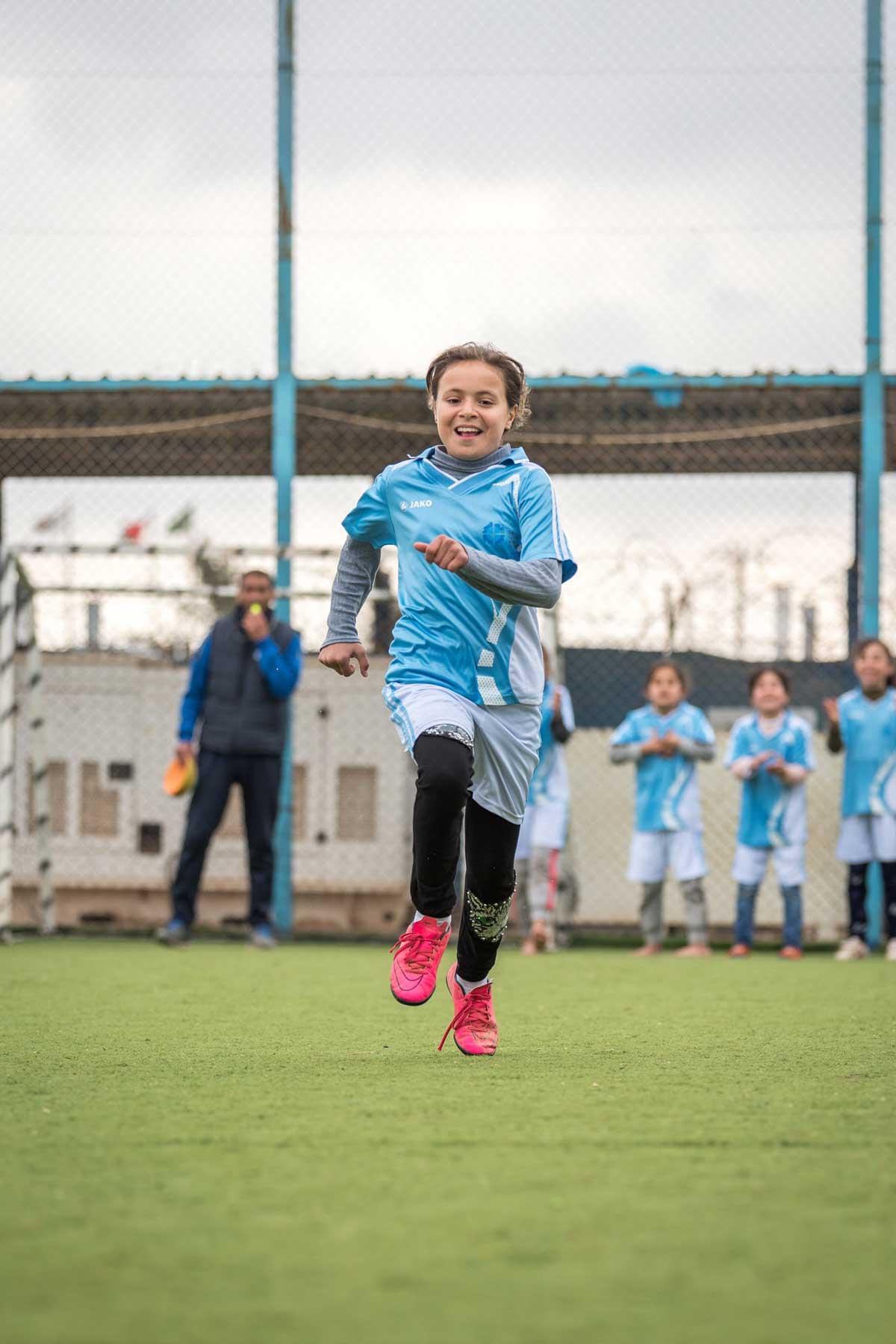 The girls' soccer team is one of the most popular activities at the LWF Peace Oasis in Zaatari. LWF installed visual protection so the girls could play as well. Photo: LWF/ Albin Hillert

Since the start of LWF Jordan's work in 2012, LWF has been operating the Peace Oasis, a socio-cultural center for young people in the Za'atari refugee camp. In 2016, a Community Centre and sub-office opened in Irbid. In 2019, the "Smurf Centre," a space dedicated to children, was added to the Peace Oasis, while LWF opened another Community Centre in Zarqa. Today, all three centers offer the same types of services: case management, individual, group, and family counseling, referrals, livelihood initiatives for men and women, community mobilization, and awareness-raising activities. The centers also pride themselves on well-assorted second-hand boutiques, contributing to the circular economy in a dignified and environmentally sustainable way.

Part of LWF's work focused on the Jordanian schools, which had taken in hundreds of thousands of refugee children, and needed repair. "Over the years, we have refurbished more than 100 schools, contributing to an improved learning environment for more than 65,000 students in Amman and the three northern governorates in Jordan: Irbid, Zarqa, and Mafraq. While we no longer work in school rehabilitation, providing safe, welcoming, and stimulating environments for children, youth, women, families, and communities are at the core of what we do", Tveoy says. 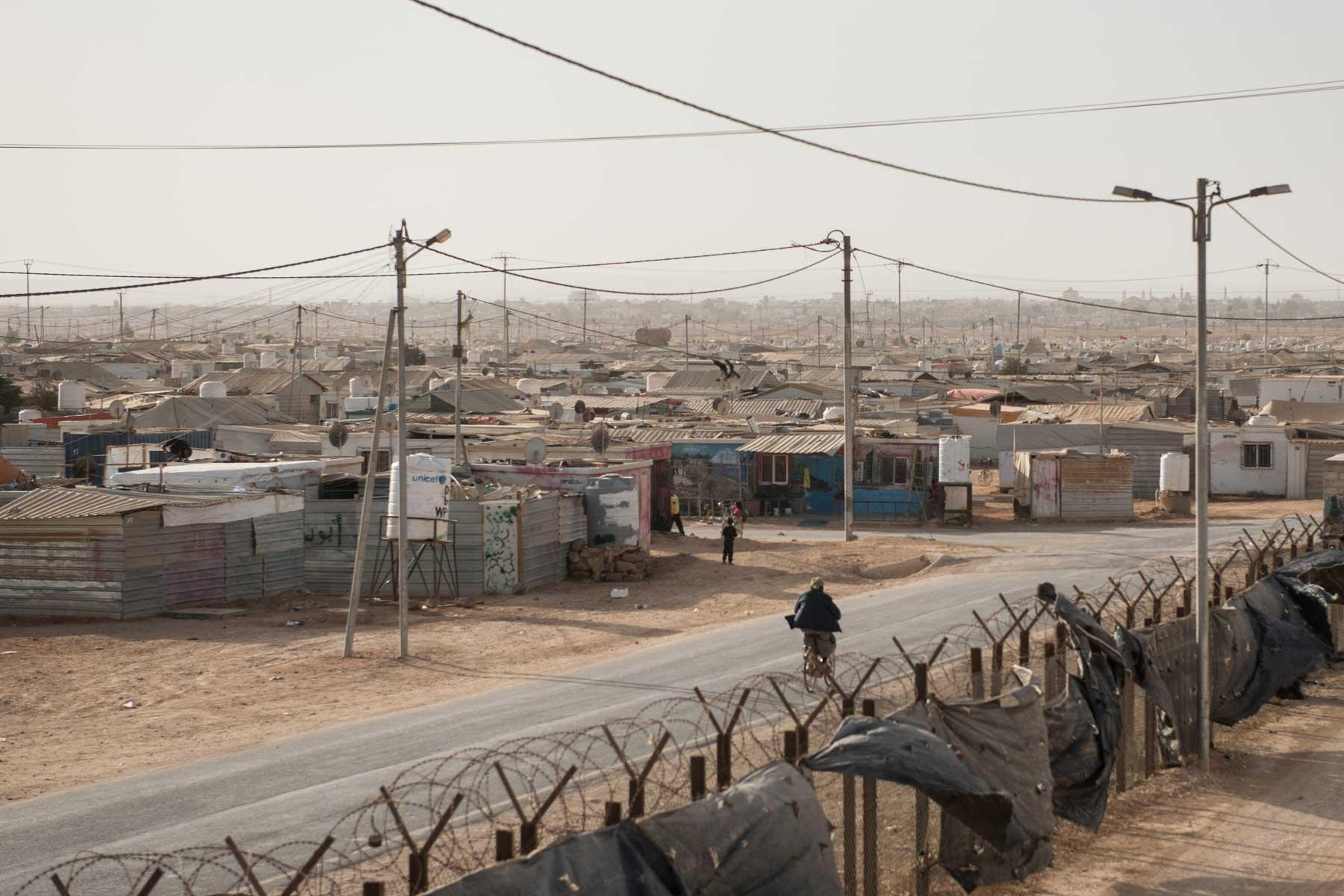 Zaatari with its 80,000 inhabitants is the largest refugee camp in Jordan. It has shops, schools and infrastructure like a small town. Photo: DCA/ Christian Jepsen

Over the years, LWF has built strong connections with the communities, says Program Coordinator Islam Shdefat. “I have witnessed refugee children graduate from school and grow into adults. LWF has become a family to many of them," she says. "I have been invited to the weddings of Syrian children I used to play with when the Zaatari camp was first set up."

I have been invited to weddings of refugee children I played with when Zaatari camp was set up.

LWF's community-based approach, implemented through its three community centers and an extensive network of civil society-based organizations, encourages learning and interaction between refugees and Jordanians. The program is run entirely by local staff. In the Peace Oasis, the Syrians decide on the activities and run the workshops. "The local staff, supported by Syrian and Jordanian community volunteers, are the program's strength," says Ameera Khamees, LWF Jordan Country Director. "They all work together to identify the needs and drive change collectively."

Another distinct feature of LWF Jordan is the high rate of female representation in senior management and staff. Female labor force participation in Jordan stands at 15 percent, and is even lower for women in decision-making positions. In LWF Jordan, however, three of the four senior management positions are currently occupied by Jordanian women, and the office has an overall 50/50 gender balance. "Besides the exceptional work in the field, LWF Jordan breaks the gender bias and challenges some of the deeply entrenched social norms by supporting and empowering female leaders," Khamees observes.

Throughout this decade, LWF has been fortunate to rely on a network of international church-based partners, primarily from North America and northern Europe. In addition to supporting the programs financially, the partners have engaged in strategic discussions and provided valuable input to the programmatic development. Tveoy concludes: "There would not be an LWF Jordan Program today without the support and commitment of the wider LWF Communion."

In the ten years of LWF's program in Jordan, LWF has helped over 330,000 people in need. Over that period, LWF has solidified its position in the country as a respectable humanitarian and development organization by establishing a network of partners at different levels – 8 government institutions, 25 international and national NGOs, and 40 community-based organizations.

"People are not starving, they are being starved”
news
ttttt
test news