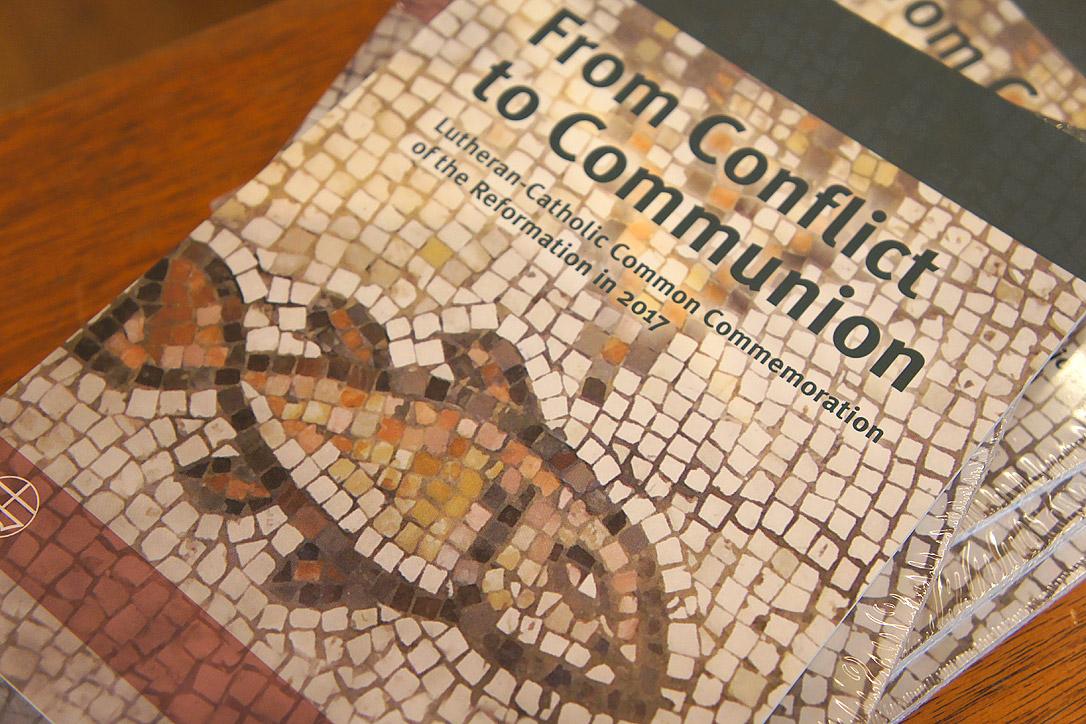 From Conflict to Communion describes jointly the history of the Reformation by the Lutherans and Roman Catholics. In telling the story together, they offer a powerful witness to a fragmented world, says Rev. Dr Martin Junge. Photo: LWF/S.Gallay

Speaking at the Lutheran School of Theology at Chicago, in the United States, Junge said reflecting together on the history of the 16th century reformation of the Church in the publication From Conflict to Communion is helping transform Lutheran-Catholic relationships towards joint witness in the world.

Published in 2013 by the Lutheran-Roman Catholic Commission on Unity, the publication is the first attempt by Lutherans and Catholics to describe jointly the history of the Reformation, the 500th anniversary of which will be marked in 2017.

While globalization appears to be driving people and communities apart, people around the world have a deep longing for a common humanity marked by inclusion and inter-dependence, he said.

“Is it too presumptuous to think that the strong message of From Conflict to Communion might speak to the longing of these people?” Junge asked during his 2015 Scherer Lecture at the seminary on 13 October.

“Is it overly optimistic to think that the commitment of Catholics and Lutherans intentionally to leave conflict behind in order to continue journeying into deeper relations of communion might offer powerful vision, hope and encouragement to people otherwise witnessing breakdowns and violence?”

In his address, From Conflict to Communion – a Prophetic Witness in a Fragmented World,

Junge emphasized that the 2017 anniversary commemoration will not be a triumphalist celebration.

“An anniversary commemoration without a deep lamentation over ruptures in the body of Christ, in communities and families, and without the confession of a blind alignment to political interests, would be a historic mistake,” he added.

Opening the chapter of deeper communion

Explaining the process by which Lutherans and Roman Catholics will receive the publication, Junge noted that the LWF and the Vatican’s Pontifical Council for Promoting Christian Unity will hold a joint ecumenical event on 31 October 2016 in Lund, Sweden, where the LWF was founded.

A common prayer is envisaged, which will incorporate the gifts of the Reformation and lamentation over the ruptures. The two bodies will “commit to the common witness to a wounded and fragmented world.” The general secretary said he hopes Lutheran congregations will use this resource with their Catholic neighbors.

Junge said it is important to recognize the expectation of many baptized Catholics and Lutherans - “those faithfully attending worship, serving the poor and speaking out for justice” - that the unity of the church can ultimately be expressed in the sharing of Holy Communion.

“Our message of turning the page and moving from conflict to opening the chapter of deeper communion, everything that we offer as joint witness in our broken world, will inevitably have to be found there where it is expressed in the deepest and most intimate ways: at the table of the Lord,” he added.

He described the common responsibility of making the report accessible and relevant as “the daring, prophetic step of letting conflict go, so that our hands, minds and hearts are empty enough to receive communion as God’s gift.”