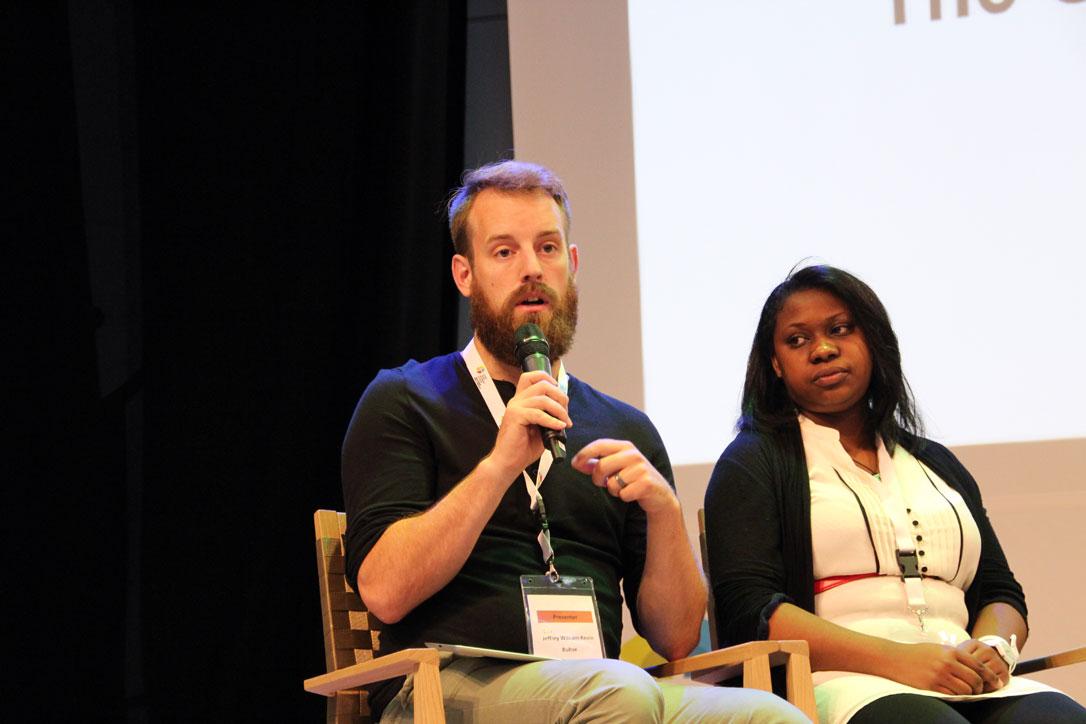 Jeff Buhse and Tsiry Rakoto, of the LWF climate justice working group, tell young Lutherans in Wittenbergy that they need to support political commitment to a reasonable climate change agreement at the COP21 conference in Paris later this year. Photo: GNC/LWF/F. HÃ¼bner

The Fast for the Climate campaign, observed on the first day of each month by the LWF, other faith-based and civil society organizations grew out of youth advocacy at the 2013 United Nations climate change conference in Warsaw, Poland.

The September fast coincides with the World Day of Prayer for the Care for Creation led by the Orthodox Church, and recently endorsed by the Vatican. At the Wittenberg workshop, the young reformers will show the LWF’s support for this ecumenical initiative in a lunchtime vigil that will include prayer and an invitation to fast.

“It’s an open invitation to young reformers to give up a meal or something else, take time to reflect alone or in a group, to show solidarity with those who are suffering because of the impact of climate change,” said Tsiry Endor Rakoto, of the LWF climate justice working group.

Through its youth delegation to the annual Conference of Parties (COP) to the UN Framework Convention on Climate Change since 2012, the LWF has consistently drawn attention to the urgent need for solidarity with victims of climate change across the world.

At the workshop of the Global Young Reformers’ Network, taking place in Wittenberg, Rakoto and Jeff Buhse led a session titled “Reduce, Reuse, Reform” in which they explained LWF advocacy on climate justice. They emphasized the need to support growing calls for political commitment to a reasonable climate change agreement at the COP21 conference in Paris later this year.

Rakoto, from Madagascar, and Buhse, a Canadian, explained why upholding climate justice is important from the perspective of belief in God as the Creator and from a justice and human rights approach. Over the decades, human activity has made a substantial contribution to greenhouse gas emissions, which have notably led to rising temperatures and more frequent and intense weather events, they said. Though the effects are sometimes subtle, over time, communities in developing countries experience changes in weather conditions that put lives and livelihoods at risk.

Strong advocacy is therefore needed for decisive political action to lower carbon emissions to fewer than two degrees Celsius, the level recommended by the Subsidiary Body for Scientific and Technological Advice to the UN Convention on Climate Change. In addition, genuine commitment is required to provide immediate and long-term funding to help the poor and marginalized adapt to and mitigate the effects of climate change.

Getting the young people involved

“As we build momentum towards a binding agreement at the UN level through campaigns such as Fast for the Climate, it is important that the movement for climate justice and sustainability is rooted in communities, small and big, and that young people have a voice in decision making. Youth are aware of their present context and will be the ones to give direction to the future,” Rakoto added.

The LWF has established guidelines for its Communion Office to help lower carbon emissions. Its work with churches in different parts of the world includes assistance to communities seeking ways to deal with the effects of climate change on livelihoods and on the environment.

In a statement adopted at its June 2014 Council meeting, the LWF said climate justice is an issue of the present and the future, and endorsed the central involvement of youth in this area.

At its 2015 meeting, the Council reaffirmed its understanding that climate change is a defining issue of our time and announced that it would be the policy of the LWF not to invest in fossil fuels.

“As a Lutheran Communion, we understand that climate change is an issue that impacts on justice, peace, the care for creation, and protection for all peoples everywhere. We raise a special concern for the most vulnerable, in particular the poor, indigenous people, and the voiceless,” it said in a statement.

“We re-commit ourselves and encourage others to commit to a profound change in our lifestyles and in the broader system of production and consumption. We must live as responsible and accountable citizens of this planet.”

During the workshop, participants were invited to identify scripture that they found relevant in determining whether mitigation or adaptation would be most appropriate in their respective contexts. “It is so great to see so many participants from the young reformers’ group acknowledge the need for action and how joint action is important,” added Bhuse.

Around 140 Lutheran youth are in Wittenberg for a two-week workshop organized by the LWF Youth desk to prepare for the 500th anniversary of the Reformation in 2017. “Freed by God’s love to change the world” is the theme guiding the plenary presentations, smaller group workshops, local parish visits and daily prayer and devotions.