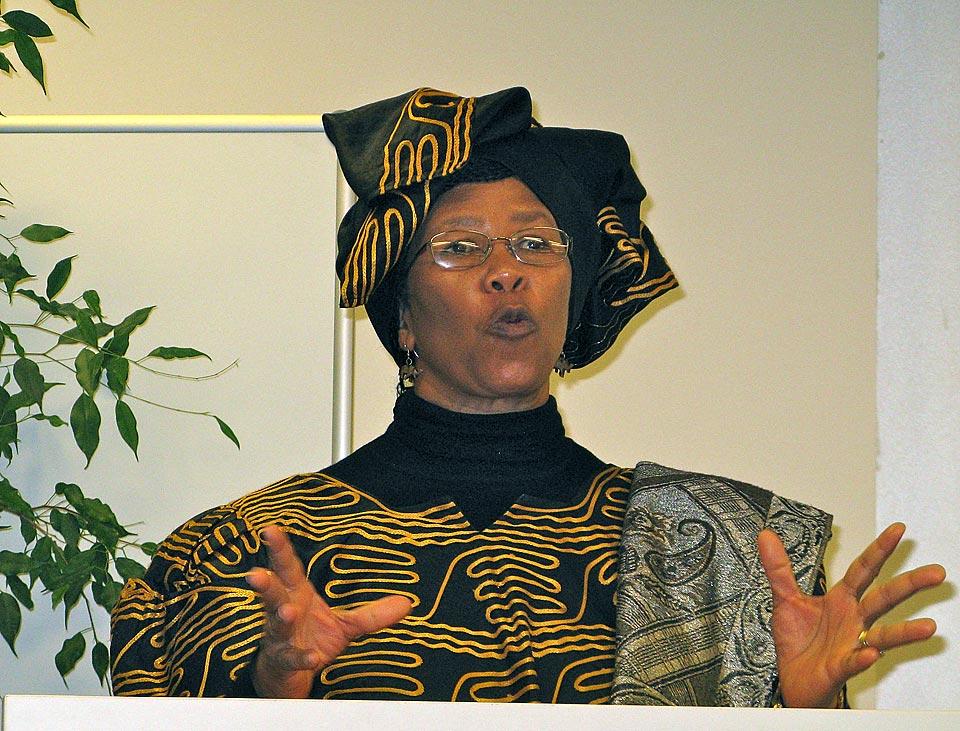 Prof. Madipoane J. Masenya from South Africa speaks on the future role of the church in development. Â© LWF/Anli Serfontein

The impact of the interpretation of holy scripture and religious traditions on human, social and economic progress in society was one of the major subjects discussed at an international conference on religion and development in Neuendettelsau, southern Germany.

The opening address by South African scholar Prof. Madipoane J. Masenya on “The Future Role of the Church in Development Cooperation” highlighted in a powerful way the close connection between development issues and the Bible and other sacred writings, delegates emphasized.

Masenya, an Old Testament scholar at the University of South Africa (UNISA) is among the 70 participants from churches, academics, secular development practitioners and policy makers at the 21-25 October conference jointly organized by The Lutheran World Federation (LWF) and the German mission agency Mission Eine Welt.

She pointed out that for development to reach its full potential among religious communities it was not only the Bible but also other holy scriptures like the Koran that should be re-interpreted in a current context.

Her presentation, which was extensively discussed, also addressed gender issues in development. “If we understand development in a holistic way, that is, developing people spiritually, emotionally, economically and socially then we cannot leave out the issue of the reinterpretation of scripture in a more gender sensitive way,” Masenya said.

“A faith that is alive will enable its bearer to seek righteousness and justice. Persuaded by such a faith, we are continuously reminded that for as long as there is a section of God’s humanity which is oppressed (in one way or another), we are all oppressed,” she stressed.

In group discussions, some of the delegates looked at how women can be empowered and their roles strengthened both in religious and development contexts. Some participants raised concern that when gender roles changed there was also a shift in the family structures, which sometimes leads to the breakdown of family life. There was a strong call for the churches to support families encountering new challenges to their held values and traditions.

Other speakers focused on how Lutheran theology contributes to a holistic development model; gave perspectives from Pentecostal and charismatic churches, and Islamic and multi-faith contexts; while one of the case studies focused on women’s contribution to peace.

Warning told Lutheran World Information (LWI) that faith and development have been ignored by governments in the past, but this focus was now on the agenda again. “So governments realized in the last years that they have neglected both culture and religion [in development work] and that part of the failures are because of this neglect. And they also realized that if you do not deal with people as holistic human beings you are likely to fail.”

Worship life also played a part in the conference. In his sermon at the conference opening service, Rev. Michael Martin, head of Ecumenical Affairs and Church Life for the Evangelical Lutheran Church in Bavaria, referred to Germany’s situation after the Second World War in 1945 when it lay in ruins but was rebuilt through the generosity of the whole world.

Reflecting on the theme, “Rebuilding the walls and repairing the broken gate,” Martin reminded the conference participants that religion and development was not an inner-Christian topic. “It goes far beyond our congregations and churches. And it asks how we can renew cities and people together after terrible devastation; how we can help together to create living possibilities for all people, and how we can rebuild what is lying in waste.” (688 words)

More from the Conference