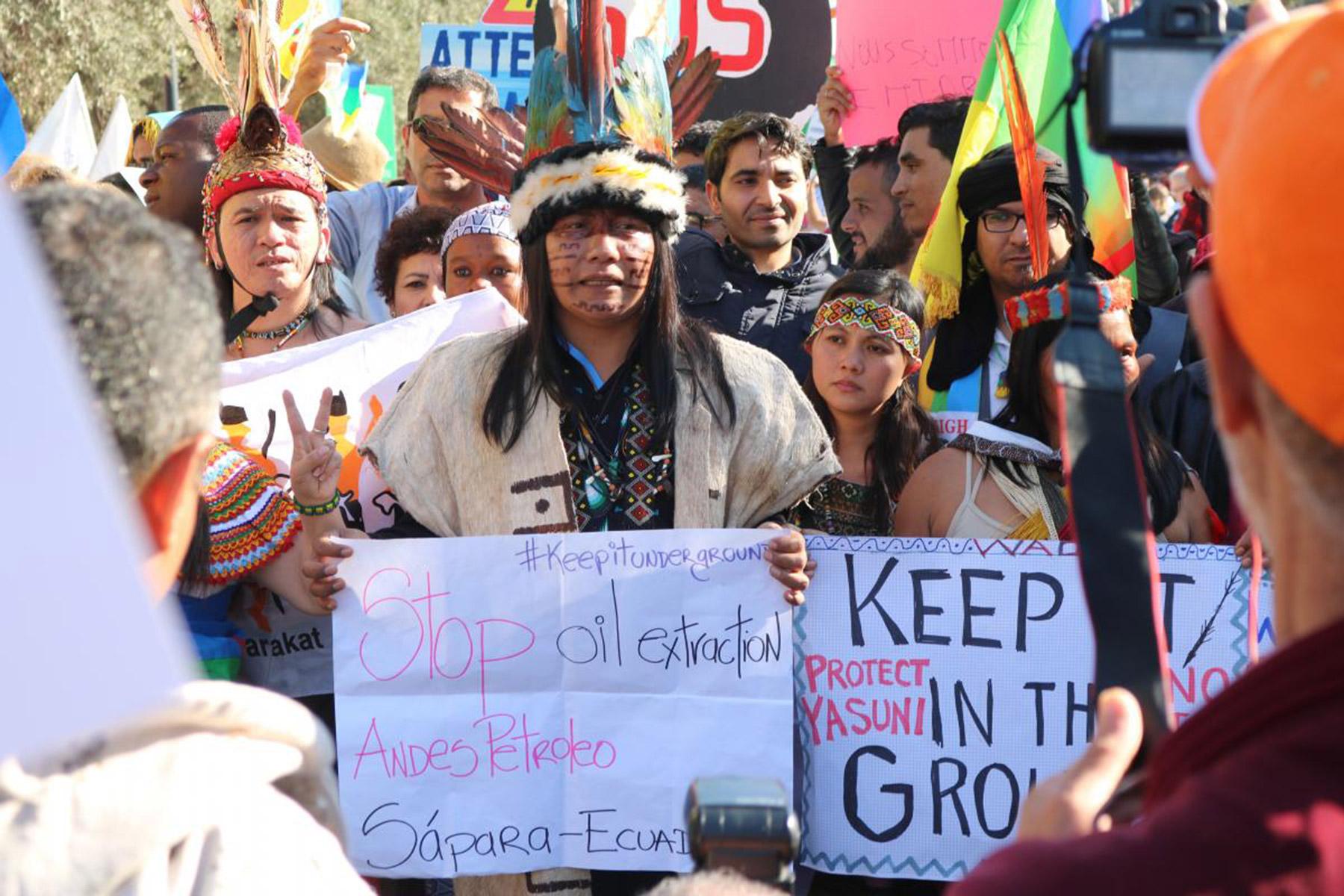 (LWI) - From the Arctic Circle to the Amazon Jungle, from the south-eastern United States to the remotest tribal areas of Papua, New Guinea, indigenous leaders came together to reflect on the ways in which capitalism, colonization and Christianity have contributed to the marginalization and exploitation of their native communities. Christians today are called to listen, learn and stand in solidarity with these communities, as they propose a more sustainable vision for a new Economy of Life.

The leaders took part in a webinar on 22 April hosted by the Lutheran World Federation (LWF), the World Council of Churches, the World Communion of Reformed Churches, the World Methodist Council and the Council for World Mission. The goal of listening to indigenous perspectives on spiritualities and alternative lifestyles is part of the work of the New International Financial and Economic Architecture (NIFEA) initiative, focused on the 2021 theme: ‘Living sufficiently and sustainably’. The webinar was organized as a side event of the 20th session of the UN’s Permanent Forum on Indigenous Issues (UNPFII) which is taking place from 19-30 April. The session is focusing on the theme of ‘Peace, justice and strong institutions: the role of indigenous peoples in implementing Sustainable Development Goal 16’.

The online conversation on ‘Indigenous Peoples and the Economy of Life: Spirituality, Land and Self-Determination' was moderated by Rev. Chebon Kernell, a Muscogee traditional practitioner and director of Native American ministries for the United Methodist Church in the USA. He highlighted how many indigenous women and men in different parts of the globe have suffered violence, threats and even death "for simply saying no” to industries that seek to uproot their traditional ways of life.

Panelist Rev Mari Valjakka from the Evangelical Lutheran Church of Finland, explained how plans to develop the Arctic region known as Lapland threaten to destroy the livelihoods of her native Sámi people. Preferring to use the term Sapmi to describe that region of Finland, Norway, Sweden and the Russian Kola peninsula, she noted how the territory is famous as an “amazing winter wonderland” with its northern lights and legends of Father Christmas driving reindeer across the snowy landscape.

“Tourists are important for us,” she said, "and especially now that travel is restricted, we are really suffering.” But tourism and other forms of development must be sustainable in ways that do not threaten the environment or the traditional life that Sámi ancestors have enjoyed for centuries, she said. “Our homeland is not a wasteland, waiting to be used and abused,” she insisted, but rather “for us, wilderness is nature which is sacred, our shelter, our church, our home, source of life for every creature of God that lives here.”

Criticizing those who think only of exploiting the region's natural resources, Valjakka noted that her people “are facing heavy pressure from various mining interests and other large-scale interventions” such as wind power parks and a planned Arctic Railway. “There can be no climate justice without justice for indigenous people,” she said, adding that concerns about “green colonialism” links “current trends of renewable energy development with historical process of dispossession and subjugation inflicted on the Sámi people” in the past.

In the southern United States, in territories now known as Alabama and Georgia, the Muscogee people are also struggling to defend their homeland, language, and traditional ways of life. The Muscogee were forcibly removed from their ancestral lands in 1836, recalled Marcus Briggs-Cloud, co-director of an eco-village called Ekvn-Yefolecv which is committed to linguistic, cultural and ecological sustainability. Living off-grid in an income sharing community on traditional lands, residents are using natural building methods, renewable energy and regenerative agriculture as “an act of resistance” against capitalist culture, he said.

“Our languages are becoming obsolete because we don’t have words for capitalist concepts which are antithetical to the traditional ethos of our ancestors,” Briggs-Cloud continued. Instead of trying to “fit in” and “whitewash our language,” residents of the eco-community are seeking to “recreate a society where our language functions best,” he added. They also practice the traditional annual ceremonies needed “to renew our relationships with the natural world,” he said.

Panelist, Elvira Rumkabu, who advocates on indigenous Papuan issues, spoke of the struggle for justice and self-determination of her community in the Indonesian province of West Papua, where conflict with the government has been continuing since the 1950s. Many indigenous people have fled their lands to escape the violence, she noted, while “ongoing human rights abuses put people’s lives at risk even in their own homes.”

West Papua is rich in natural resources, Rumkabu continued, but this wealth is “both a blessing and a curse” because indigenous people have very limited control or access to these resources.” Their communities have the highest maternal mortality rates in Indonesia, together with higher rates of illiteracy and HIV infections. These problems are being further compounded by major “top-down” efforts at infrastructure development by the Indonesian government, resulting in indigenous lands being taken over for the building of bridges and roads.

The “dominant narrative now is one of survival,” Rumkabu said, noting that a recent Greenpeace International report entitled "License to Clear” warns of dire environmental consequences if Indonesia proceeds with the deforestation of an area almost twice the size of the island of Bali for palm oil production. A major problem for indigenous communities is that “traditional philosophies and practices are being denied” on the pretext that “local knowledge is not considered suitable for nation-building,” she said.

In Asia, Africa and Latin America, indigenous representatives spoke of the struggle to preserve for future generations the traditions and spiritual wisdom that was handed down from generation to generation. Jocabed Solano, an indigenous theologian and activist from the Gunadale nation in Panama, spoke of the way Catholic and Protestant churches contributed to “the spiritual colonization” of her people, supporting efforts to “civilize” them by suppressing their language, dress and traditional ceremonies.”

From colonization to empowering communities

“Not all of Christianity is supportive of colonial ideologies,” she continued, but “even today we can see how some theological institutions oppress indigenous people.” Colonialism, capitalism and Christianity are cross-cutting issues, she continued and “it is important to recognize how self-determination must be present in all spheres of life.” We must resist the imposition of “truth” and “know-how”, she said because “our people understand how to live in harmonious relationships to Mother Earth.”

Journalist Leonardo Tello, who runs a radio station in Peru’s Amazon region, also spoke of the connections between colonialism, Christianity and capitalist ideologies for the Kukama people in his part of the world. When the rubber boom began in the 19th century, he said, “the church was an accomplice to this violent entrance of capitalism.” The colonizers were unable to understand “what balanced relationships had meant for our people for hundreds of years” and how indigenous spirituality considers plants, birds, fish and animals as living beings, he said.

As institutions that stand for “the empowerment of the vulnerable and marginalized, may the churches listen and learn” from indigenous communities.

States still have “a concept of territory in which the soil, the land, the air belongs to them,” he continued. But “for us indigenous people, our understanding goes well beyond borders, frontiers, ownership, or documents that make you the owner of a certain space.” It is vital for Christianity to be open to the indigenous ways of understanding the world, including the harmonious relationship to Mother Earth - or Mother River for those who live in Amazonia, he stressed.

Anglican Bishop Rex Reyes from the Philippines, who served as the first indigenous general secretary of the National Council of Churches in his country, concluded with a call to churches to “become platforms for indigenous people to share their stories and raise their concerns.” As institutions that stand for “the empowerment of the vulnerable and marginalized,” he said, “may the churches listen and learn” from indigenous communities, standing in solidarity as they seek to make their voices heard.

Rev. Dr Sivin Kit, LWF’s Program Executive for Public Theology and Interreligious Relations, echoed Bishop Reyes’ call to the churches: “We need the participation and wisdom of indigenous peoples. Our public witness requires incisive critiques combined with constructive, holistic ways forward. Both are part of shaping the transformative vision and reality of abundant life for all.”