“I will continue to be a servant of the Gospel” 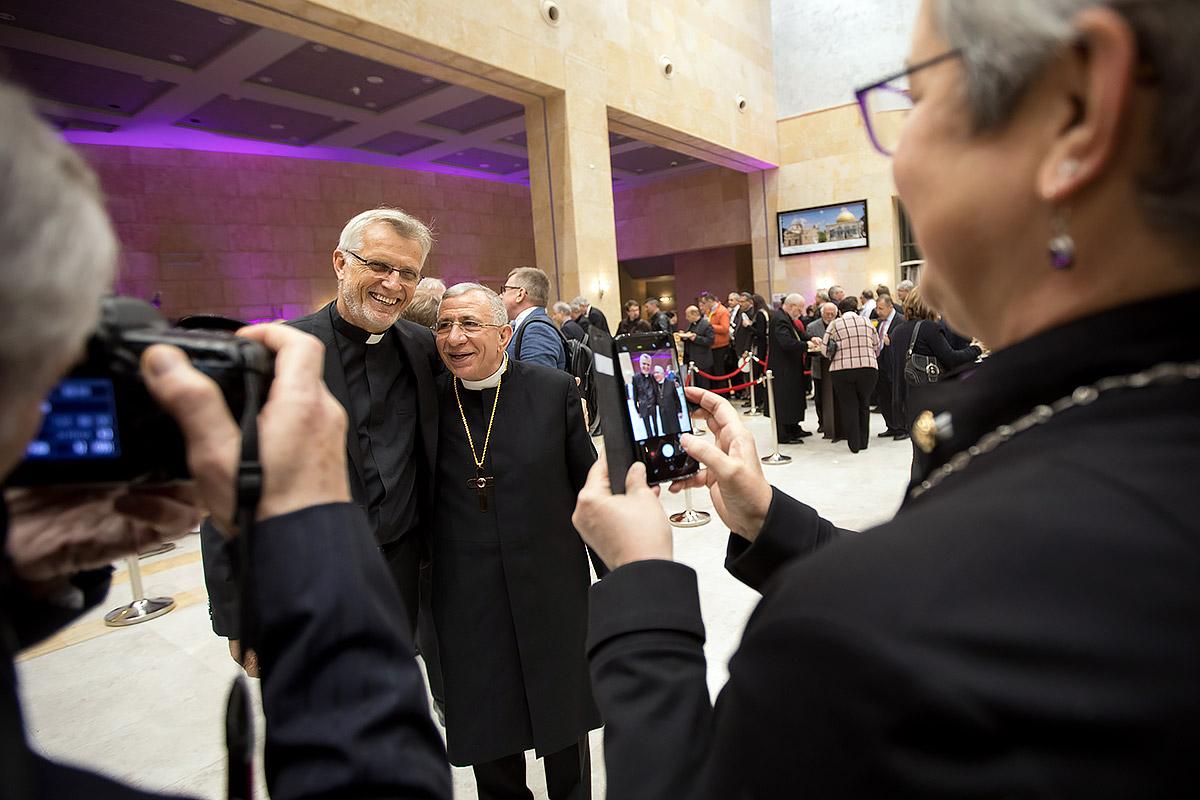 Munib Younan retires as bishop of the ELCJHL

(LWI) - "There is hardly a right moment to leave office; but there is a right attitude: entrusting one's own life and the witness of the church into where it belongs, hence into God's hands", the General Secretary of The Lutheran World Federation (LWF) Rev. Dr Martin Junge said in Bethlehem on the occasion of thanking Bishop Munib. A. Younan for his service in the LWF as well as in the Evangelical Lutheran Church in Jordan and the Holy Land (ELCJHL).

On behalf of the LWF and its President Archbishop Panti Filibus Musa General Secretary Junge honoured Bishop Younan for his dedicated and loving service to the church, including the many gifts the LWF received as a global communion of churches. Younan was president of the LWF from 2010 to 2017.

More than 500 guests attended a celebration in Bethlehem on 10 January, acknowledging his 42 years of service in the ELCJHL and ecumenical engagement. In response to the numerous tributaries Younan said that “the office may be passed on, and the Evangelical Lutheran bishop may retire according to the constitution of the church, but the call to serve the Gospel of Love cannot retire. The call of God never ends! For this reason, I will continue to be a servant of the Gospel, in whatever way God calls me next. I am out of office but not out of mission.”

“My love for this global communion has been deepened”

Bishop Younan was elected to the presidency of LWF by the Eleventh Assembly in Stuttgart, Germany, in July 2010 and served in this position until May 2017 when the Twelfth Assembly in Windhoek, Namibia, elected Archbishop Panti Filibus Musa from the Lutheran Church of Christ in Nigeria as his successor.

During his President’s Address to the Assembly Bishop Younan stated that “These years of service have brought many remarkable experiences for me, for my church, and for my family. Through this role, my love for this global communion has been deepened.”

These years of service have brought many remarkable experiences for me, for my church, and for my family. Through this role, my love for this global communion has been deepened.

Younan’s involvement with the LWF dates back to 1981. It includes membership of its Youth Committee (1981-1984); adviser to the Council (1990-1997); Council member, vice-chair of the Board of Trustees of the Institute for Ecumenical Research in Strasbourg and vice-chair of the LWF Program Committee for Mission and Development from 1997 to 2003. From 2003 to July 2010 Younan served as LWF vice-president for the Asia region, Council member and member of the LWF Executive Committee.

A high-profile lecturer and speaker, Bishop Younan is sought after for his perspective on just peace as a Palestinian Christian. Younan is also active in interreligious encounter, ecumenism and reconciliation in the Middle East and internationally. His work has been recognized with several awards and prizes, the most recent being the Niwano Peace Prize which he received in Tokyo, Japan, in July 2017.

Bishop-elect Sani Ibrahim Azar to be installed on 12 January

Sani Ibrahim Azar is the bishop-elect of the ELCJHL. He will be installed on 12 January. The 56 year old theologian has served as pastor of the Evangelical Lutheran Church of the Redeemer in the Old City, Jerusalem, for 30 years.

Photos from the ceremony