Holding together a world plagued by violence and division 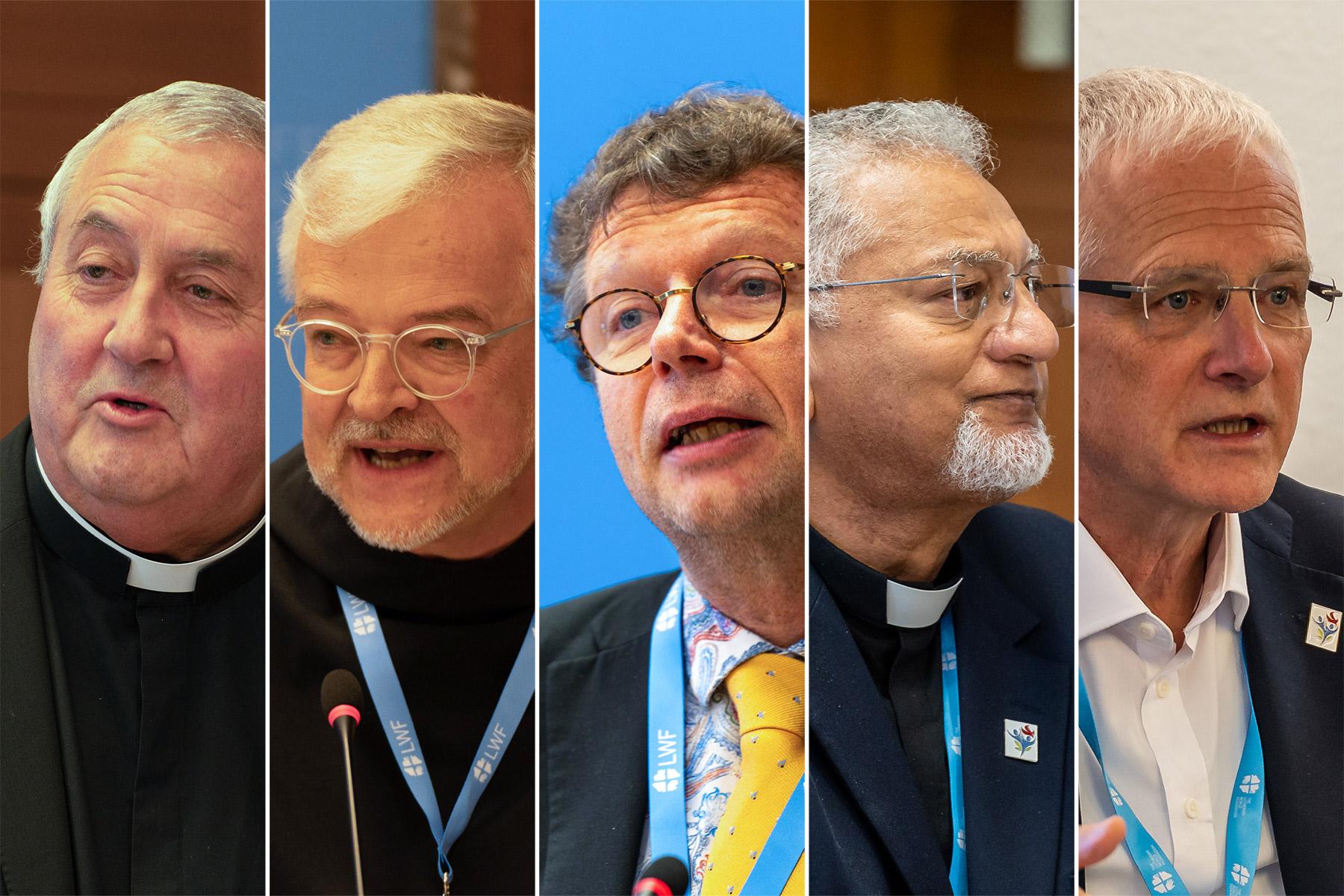 (LWI) - Catholic, Methodist, Pentecostal, Reformed and Orthodox church leaders have been speaking at the Lutheran World Federation (LWF) Council meeting about the urgency of deepening theological understanding and stepping up practical cooperation in order to become “credible witnesses to a world that is plagued by division, violence and selfishness.”

LWF Council members are meeting in Geneva from 9 to 14 June for their first in-person gathering since the start of the pandemic, reflecting on the theme ‘In Christ all things hold together’ (Colossians 1: 9-20).

Among the ecumenical guests addressing the meeting was Rev. Dr Hanns Lessing, Acting General Secretary of the World Communion of Reformed Churches (WCRC), who noted the important cooperation with LWF on justice and peace issues, including the recent response to Russia’s invasion of Ukraine. He also pointed to two joint conferences that will be held at the end of this year on post-pandemic theological education and on freedom of religion and belief.

At a time when we feel that so many things are falling apart, you guide our attention to that place where even the grossest contradictions and the fiercest enmities hold together.

Reflecting on the theme of the Council, he said: “At a time when we feel that so many things are falling apart, you guide our attention to that place where even the grossest contradictions and the fiercest enmities hold together.” Though this place is “invisible to the human eye” and “beyond our understanding,” he added, “this verse calls us to see the ‘holding together’ as a palpable reality, a divine gift that is already there and needs to be received in our understanding and in our lives.”

Representing the Pentecostal World Fellowship, Dr. Jean-Daniel Plüss praised the LWF’s “unwavering ecumenical commitment” of the past twenty years which led to the inauguration of the first official dialogue between the two world communions in 2016. The concluding document of that dialogue will be available for the Thirteenth LWF Assembly in Poland next year, he noted, and “will be an encouragement to Lutherans and Pentecostals alike,” especially at “regional levels where concrete ecumenical relations can bear much fruit.”

The Pentecostal leader called for “a continuation of our dialogue and common initiatives” and he invited the LWF to be present at the Pentecostal World Conference which will take place from 12 to 14 October in Seoul, South Korea. It is only “in Christ,” he affirmed, “that our different practices and beliefs can be understood, appreciated and brought to productive interplay by the power of the Holy Spirit.”

Speaking from a Catholic perspective, Fr. Dr Augustinus Sander from the Vatican’s Dicastery for Promoting Christian Unity, also reflected on the theme of the Council meeting and the forthcoming 1700th anniversary of the Council of Nicaea. Through the Nicene Creed, which is common to all Christians, he noted, “we are united in the common praise of God – many voices but one song!”

He expressed the hope that the Nicaea anniversary in 2025 can be a significant “place and time of pause” on the common journey “from conflict to communion,” a moment of “spiritual concentration […] to gather new strength for the journey through time.” Sometimes, he added “we would like a faster tempo, but we are not short-distance runners, we are long-distance runners. We need the long breathe to reach the goal.”

Bishop Ivan Abrams, General Secretary of the World Methodist Council, noted that the LWF Council meets at a time when “we are very conscious of the war in Ukraine and many other places of violence and conflict in the world.” As we “reimagine a post-COVID world, we realize our vulnerability and growing inequality to basic health care,” he added.

We have to clearly condemn and challenge any theology, but we are a platform for inclusion and discussion.

In the face of these and many other challenges, the Methodist leader continued, “we reaffirm our commitment to radical discipleship and stand ready to work with all ecumenical partners to be agents of hope and healing to create a just and sustainable future for all.”

Commenting on whether the WCC would exclude the Russian Orthodox Church in the wake of its support for the war in Ukraine, Sauca said “we are a platform for inclusion and discussion, creating spaces for dialogue in order to work for peace and reconciliation.” Nevertheless, he added, “we strongly reject the apparent instrumentalization of religious language by political and church leaders to support an armed invasion of a sovereign country.” Peace building, he said “requires prevention, protection, patience, to listen attentively and with respect to one another, as well as mediation and a culture committed to fostering peace.”

Prof. Dr Dirk Lange, LWF’s Assistant General Secretary for Ecumenical Relations expressed his gratitude for the presence of these ecumenical guests at the Council meeting. The LWF and its ecumenical partners, he said, “continue to pray together, serve together, and walk together on the way from conflict to communion.”