“By his bruises we are healed” 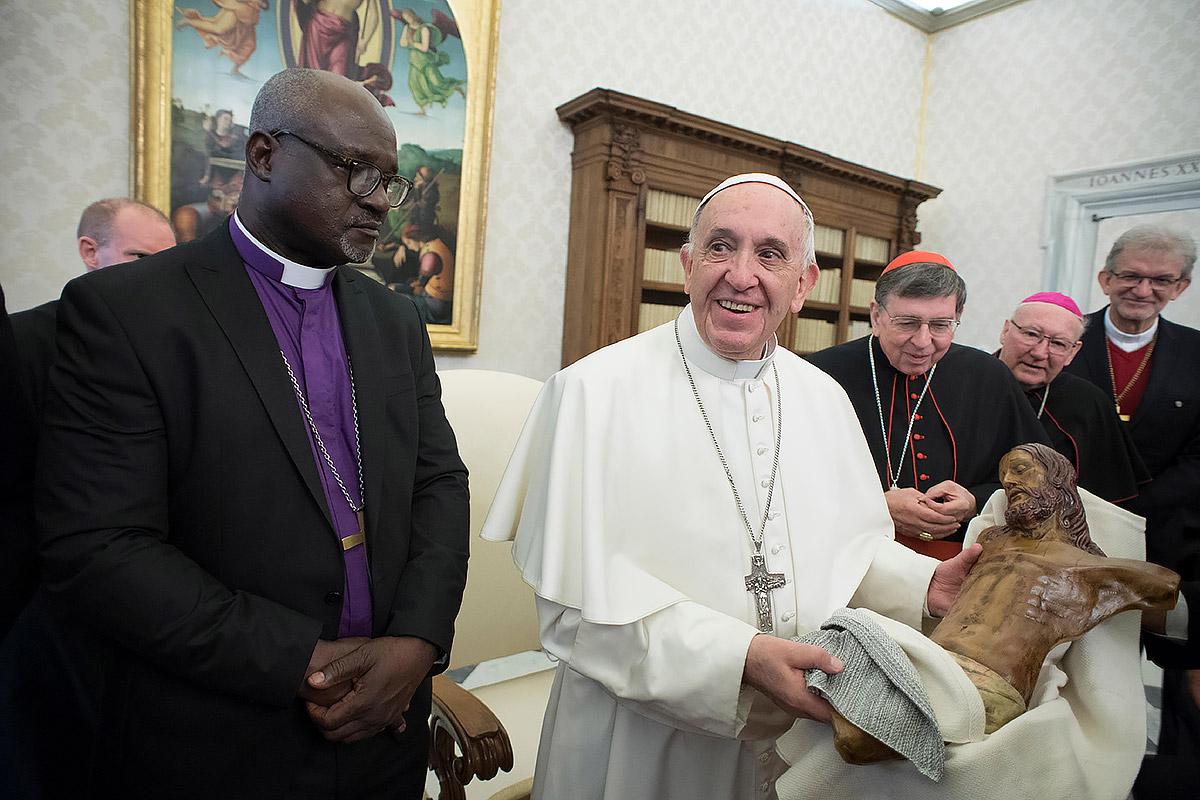 LWF delegation presented Pope Francis with a replica of the Christ of BojayÃ¡. Photo: L'Osservatore Romano

During an audience at the Vatican on 7 December, a delegation from The Lutheran World Federation (LWF) presented Pope Francis with a replica of the Christ of Bojayá, a powerful symbol of conflict and reconciliation that comes from an area in Colombia where Lutherans and Catholics jointly work for reconciliation in society. The original crucifix, a torso without arms and legs, hangs in the village church of Bojayá, bearing strong witness to the destruction caused by the armed conflict in Colombia, and the power of reconciliation.

Presenting the gift to Pope Francis, LWF General Secretary Rev. Dr Martin Junge, referring to Isaiah 53:5, said: “looking at the wounded Christ, we are drawn into God’s reconciling presence that heals our wounded world and calls the church into unity.”

Reminder of death and destruction

The mutilated image of Christ became a national symbol after the Bojayá massacre in 2002. During a firefight between the FARC (Revolutionary Armed Forces of Colombia) guerrilla and right-wing paramilitary groups, an explosive thrown by the FARC exploded inside the church. The bomb killed 119 people, many of them children, and wounded 89 who had been seeking shelter inside the building. The explosion also blew away the arms and the legs of the crucifix, leaving only the torso.

On his visit to Colombia in September 2017, Pope Francis prayed before the Christ of Bojayá.

“Today, we bring a replica as a visible sign of our joint work among people seeking justice, peace and reconciliation in their lives and communities, responding to the call of being ambassadors of reconciliation in our world,” General Secretary Junge added.

Working together for peace and justice

The Department of Chocó, located on the Colombian Pacific coast, is inhabited predominantly by the African-Colombian and indigenous population. During the internal conflict, the area was contested territory between armed groups for its natural resources, and a favored route for drug and weapons trade. The region has a long history of human rights’ violations, which predominantly affect the already marginalized communities.

LWF and Caritas have been working to support the Colombian peace process as well as affected communities like Bojayá. They supported the community when the massacre was brought to court in 2015.

During the peace negotiations between FARC and the Colombian government in 2015, FARC guerrillas went to the community asking the people of Bojayá for forgiveness.

Remarkably, in the referendum about a peace accord between the Colombian government and FARC, 96 percent of the people of Bojayá voted in favor of making peace, while the majority of the country had voted against the accord, resulting in the rejection by a small percentage. The accord was later re-negotiated and finally signed in November 2016.