How can church leaders and faith communities step up and support the struggle to end violence against women and girls? An ecumenical panel of activists explores practical action at the start of the annual 16 Days of Activism campaign. 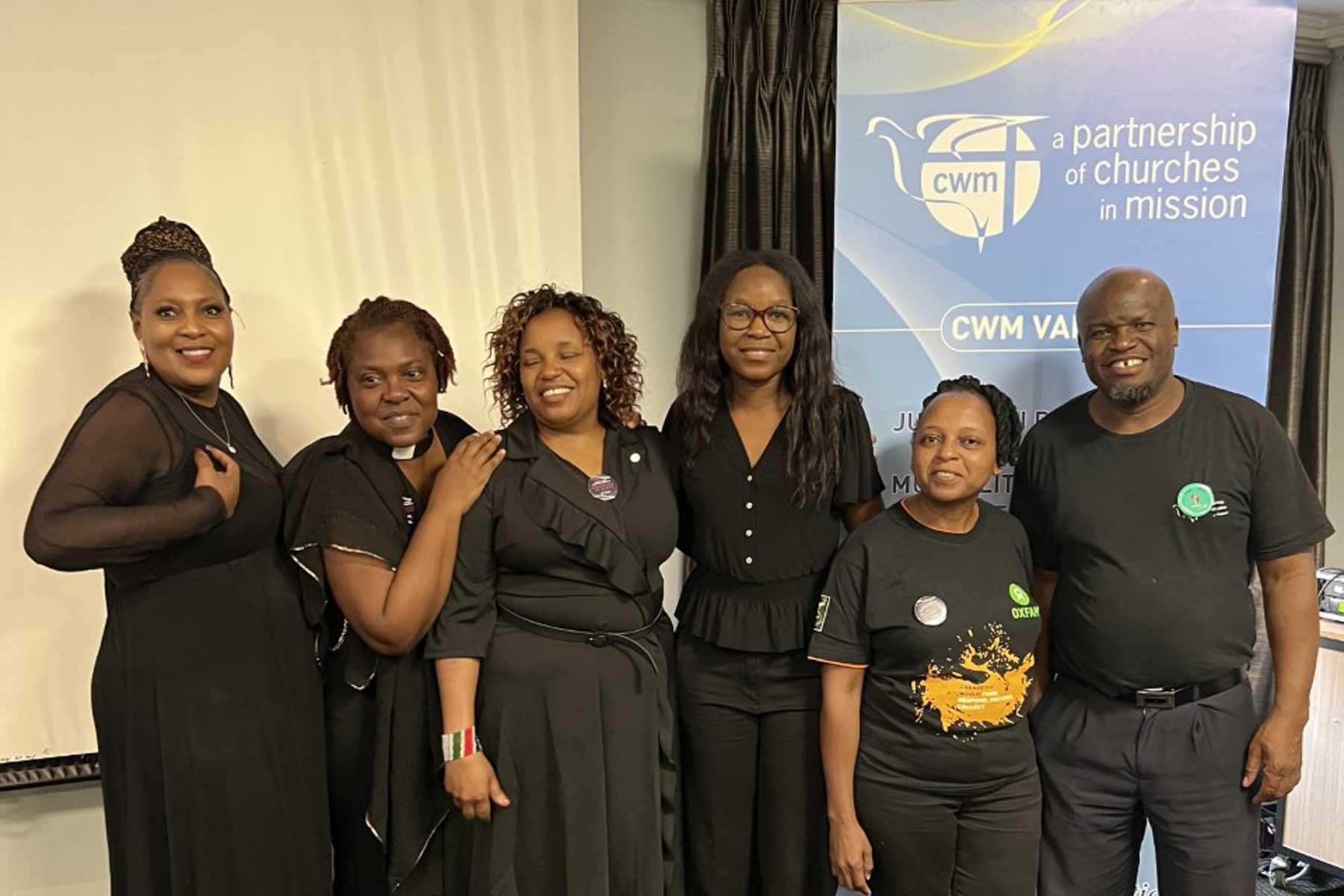 Organizers of the ecumenical dialogue which marked the start of the 16 Days campaign, including WCC’s Rev. Nicole Ashwood (second from left) and LWF’s Sikhonzile Ndlovu (third from right). Photo: CWM/Damon Mkandawire

(LWI) - The urgent task of equipping church leaders and building capacity of faith communities to prevent and respond to gender-based violence was the topic of a webinar on 24 November, jointly organized by the Lutheran World Federation (LWF), the World Council of Churches (WCC) and the Council for World Mission (CWM).

The event, supported by the All Africa Conference of Churches, marked the start of the annual 16 Days of Activism to end gender-based violence. The LWF has a long history of engagement in the annual campaign, which begins on the International Day for the Elimination of Violence against Women, 25 November, and ends on Human Rights Day, 10 December.

This year, the campaign focuses on the power of partnerships with the global theme of ‘UNITE: Activism to end violence against women and girls. Speaking at the opening of the webinar, LWF’s Advocacy Officer for Gender Justice, Sikhonzile Ndlovu noted that despite growing awareness of the problem, the scourge of gender-based violence continues to rise and to remain under-reported in countries across the globe. “It is vital,” she said, “that we deconstruct the oppressive social, cultural and religious norms that perpetrate this hidden pandemic.”

Among the panelists discussing concrete ways of changing attitudes within the churches was Rev. Bafana Khumalo, executive director and co-founder of the South Africa-based Sonke Gender Justice network. A pastor in the Evangelical Lutheran Church in Southern Africa (ELCSA), he is well known for his work as a former member of South Africa’s National Commission for Gender Equality, as well as for his work with the government on HIV and AIDS prevention.

“As churches,” Khumalo noted, “we are complicit in the violence against women and girls in terms of our theologies, our symbols, our culture.” As long as we continue to “embed the understanding of men as the head”, he said, “the church will continue to be a patriarchal institution, creating an environment where abuse can thrive.” We can only become allies in the struggle to combat this problem, he added, when “we follow the example of Jesus in the gospels who breaks with tradition and culture to stand for the truth that everyone must be treated as equals, made in the image of God.”

Echoing Khumalo’s appeal for change in the churches was Daniela Gennrich, a lay canon in the Anglican diocese of Natal and coordinator for South Africa’s We Will Speak Out coalition. A survivor of gender-based violence herself, she works to equip faith communities to prevent and support survivors and is a member of the Circle of Concerned African Women Theologians. 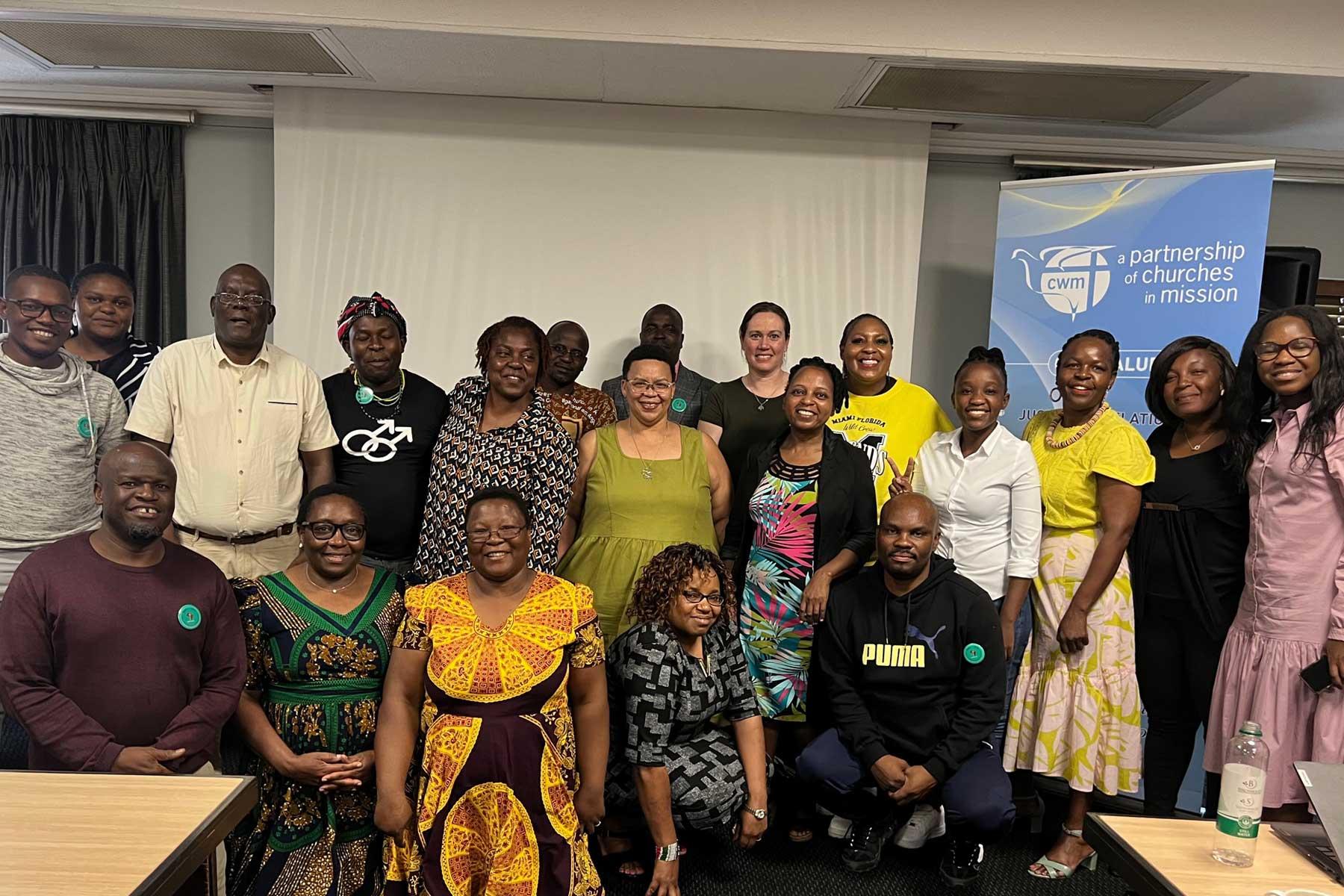 Participants in a Council for World Mission roundtable on gender-based violence which culminated in the dialogue jointly organized with LWF and WCC. Photo: CWM/Damon Mkandawire

“Patriarchy is the air we breathe,” Gennrich said, “and it feels so normal that we don’t understand when women and girls cannot breathe.” Tackling this issue “must never be an optional add-on, but must be an integral part of our everyday ministry,” she stressed. The challenge, she continued “is to speak truth to power, to step back and consider our environment,” understanding that rape or assault can be “part of many people’s everyday experience.”

Speaking from a Caribbean perspective, Jamaican sociologist and gender analyst Dr Leith Dunn noted the way many churches in her home region have worked together to combat HIV/AIDS, as well as human trafficking where women are often at high risk of gender-based violence. Dunn, who is currently a research affiliate at the University of Botswana, noted the work of the 33-member Caribbean Conference of Churches and the United Theological College of the West Indies, as well as initiatives of the Anglican, Baptist and United Church of Jamaica which have focused on trafficking prevention and partnerships with government or secular organizations to achieve this goal.

Professor Ezra Chitando, theological consultant for WCC’s Ecumenical HIV and AIDS activities and advocacy program, identified some “low-hanging fruit” or achievable goals in the work to end gender-based violence, A professor of history and religion at the University of Zimbabwe, he said the task of the church is to “transform the pulpit into a prophetic space to challenge our men and boys” over this issue.

Churches have the urgent task of “investing in life-giving biblical interpretations that expose violence against women and girls as a sin.”

Churches already have the capacity, through their ministries for men, women and children, to spread awareness and respond to gender-based violence, Chitando said. Secondly, he highlighted the urgency of “investing in life-giving biblical interpretations that expose violence against women and girls as a sin.” Thirdly, he noted that there are many activists and survivors within the church who must be “granted the space to speak.” Fourthly, he said, churches can help to increase awareness of the local, regional and international legislation that has been developed to support survivors.

Speaking from the perspective of a young African woman, Katlego Mohuba stressed that there is “much more the church can do in harnessing its assets to support survivors and end abuse.” Mohuba, who works on financing for development, climate and gender justice, spoke about the way church leaders often reinforce traditional narratives where women are seen as only having value in relation to their roles as wives and mothers.

Women who report abusive relationship are often encouraged “to pray and persevere in order to preserve marriage and the family,” Mohuba said. In poor communities, she continued, “survival sex has been normalized” and the churches have remained “silent and passive about these abusive situations.” Instead, she urged church leaders to “invest time in programs that teach the intrinsic value and agency of women,” as well as investing in their economic empowerment and supporting those who seek to escape from abusive relationships.”

Moderating the dialogue, entitled ‘Harnessing ecumenical and diaconal assets and networks to end violence against women and girls,’ Rev. Nicole Ashwood, WCC’s Program Executive for a Just Community of Women and Men, stressed that “advocacy begins with us.” During the 16 Days campaign and beyond, she said, “each one of us must ask what am I doing, or not doing, to effect the transformation that we want to see for all of God’s children?”

The 16 Days of Activism for ending Violence Against Women and Girls is an international awareness-raising campaign which runs each year from 25 November, the International Day for the Elimination of Violence Against Women, to 10 December, International Human Rights Day. LWF cooperates with ecumenical and other partners to achieve this goal and encourages its Member Churches and Country Programs around the world to creatively engage with the 16 Days campaign.

LWF/P. Hitchen
Harnessing Ecumenical and diaconal assets and networks to end violence against women and girls

LWF launched the 16 days campaign in Johannesburg, South Africa in collaboration with World Council of Churches and Council for World Mission