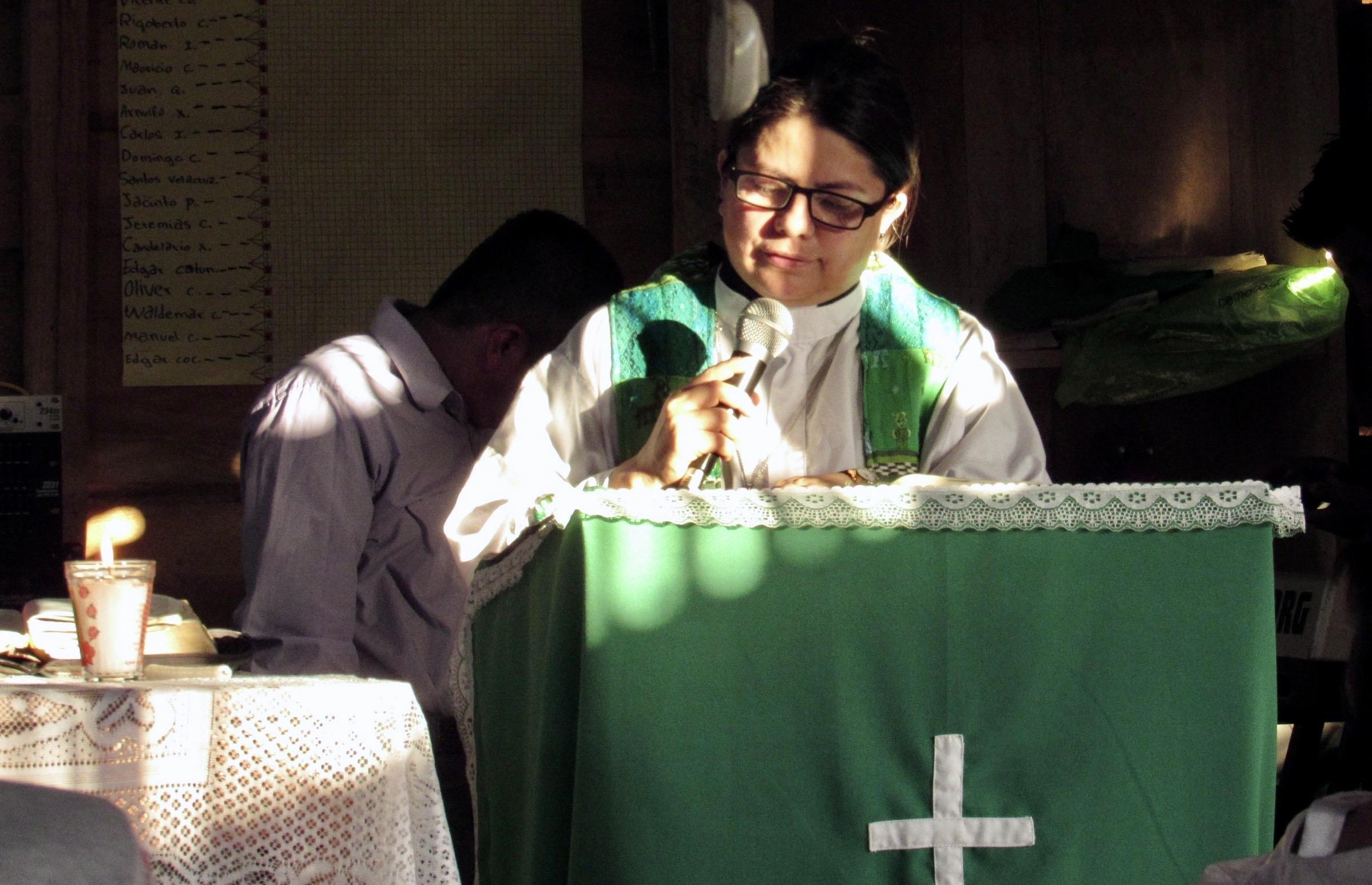 Rev. Karen Castillo talks about gender justice and Casa Milagro a boarding school for girls on the campus of the ILAG in Guatemala City. Photo: ILAG

(LWI) - Rev. Karen Castillo, president of the Augustinian Lutheran Church of Guatemala (ILAG) says gender awareness in the ILAG isn’t anything magical or a miracle but an awakening of the consciousness of the people, over time.

ILAG, one of the Lutheran World Federation’s (LWF) newest member churches joining in 2018, has 17 congregations in three regions of Guatemala, most of them in the outermost remote areas of the country serving indigenous communities where female leadership is not the norm.

President Castillo talks about the ILAG’s constancy to gender justice, which began with her parents who founded the ILAG 29 years ago, and continues under her leadership through the boarding school for girls, Casa Milagro, Miracle House.

Casa Milagro has dormitories and classrooms on the campus of the ILAG in Guatemala City and houses 15 girls, ages 10 – 20 years old.

The objectives of the program are to help girls repair their self-esteem, become empowered against abuse and eventually sustain themselves financially as small-business owners.

How did your parents begin the ILAG with a gender-awareness focus?

As children, both my father and my mother received scholarships from churches to attend school in the city. This is where they met. They believed that with those scholarships, they received an opportunity to change their lives and it opened doors for them. Therefore, they founded this church understanding that If you give someone an education their life is going to be changed - boys and girls.

How did gender justice evolve among the ILAG congregations?

Within the women’s ministry men were receiving this information as well, because we cannot work with women without working with men. In the Guatemala context, historically, men run the society so ILAG men were exposed to being open and welcoming to women’s active roles in the church, gradually. It wasn’t easy.

Thankfully, people were changing; through scripture study they learned about loving all human beings. We started learning and discovering together. Not telling them what to think, but unpacking the scripture together, reflecting on what the scripture said about equality. All this was happening as women in leadership were becoming more prominent in the church.

How did the change impact women in the church?

It was difficult for our members because many of them faced discrimination in the villages because Lutheranism wasn’t accepted as a real denomination and having a female president made that more difficult for them.

We started to see the change when women leaders began to travel to the villages alone - without men accompanying them. The women in the village became more comfortable sharing their challenges and issues. One concern they started to tell us is that they felt they had no control of their lives and of feelings of powerlessness. Often the young girls, as young as 11 years old, are given in marriage for gifts, but these young women, now mothers and grandmothers wanted something different for their daughters.

They knew ILAG was giving scholarships to girls for education in the city at other schools, but they told us the girls often faced abuse and violence on the travel and in the city. Sometimes the relative in charge of traveling with them to the city would take advantage of the girls.

We listened. Our policy is to never tell congregation members what they need. We listen to what they want. Our ministries come from the needs of the people.

Casa Milagro was developed in this way, through listening and hearing what the people wanted, what the women told us they wanted.

Were the families eager to send their daughters to Casa Milagro?

When we began planning for Casa Milagro, we went back to the villages to ask if they would send their girls to a program and many were on board. We came back with 60 names of girls whose families said they would send their daughters, but when the program started in 2018 only seven girls arrived.

It was a slow process of building trust. The parents wanted to know what the immediate gain would be. It was not easy to convince the families. For one girl to attend we needed permission of the entire family. Then the parents visited the facilities before making a decision.

How does the program guard against future abuse?

Once the girls were at Casa Milagro, eventually they could talk to us about their experiences and they learned that abuse is not acceptable. This is a slow process, also built on trust.

Socially, these girls were expected to be the object of the abusers and were told that it was a normal part of life and to prepare for when it happens. They were never told that this wasn’t right. It is a challenge to us as women in this society - even for adult women in leadership, because the intimidation of a male-dominated society is deep inside of us and it affects all of us. Being in the presence of all male situations may take us back to a time when we also felt powerless, but then we remember who we are today and keep working toward equality. Imagine a young girl, directly from the village, she will feel vulnerable for a long time.

The girls develop a voice to say no, they share this with their mothers, and the mothers become outspoken, as well.

However, we do not try to remove them completely from their culture and their community. The indigenous community is rich with many good things and we don’t want to take that from them. We keep the girls connected to the village in various ways while they are here.

The faith community in the village and the girls exchange letters, during holidays they go back to the village with assignments like teaching a group of women or children and giving lectures to the community to tell their experiences.

What does Casa Milagro provide the girls, their families and communities?

They become visible outcomes of the program. We accept two girls from each village, never one, so that the girls have a partner for support when they return to the village. This buddy is someone they trust and can talk to, someone who understands the changes they are experiencing. The girls are not the same when they go back.

We train them to teach in a gentle and humble manner so that they do not offend the community by making them feel like they have become superior to the others, and they have learned to speak in front of male pastors and leaders so they have the confidence to speak to a range of people.

Where are the Casa Milagro girls during the Coronavirus disease (COVID-19) shutdown?

Seven of the girls are here. Before the president of Guatemala shutdown the country we took eight of the girls back for a holiday not realizing we would be shut out of the villages.

El Salvador: “Witnessing migration is one of the hardest things”
news
test news