Germany: With heart and mind – doing what is necessary for the people of Ukraine 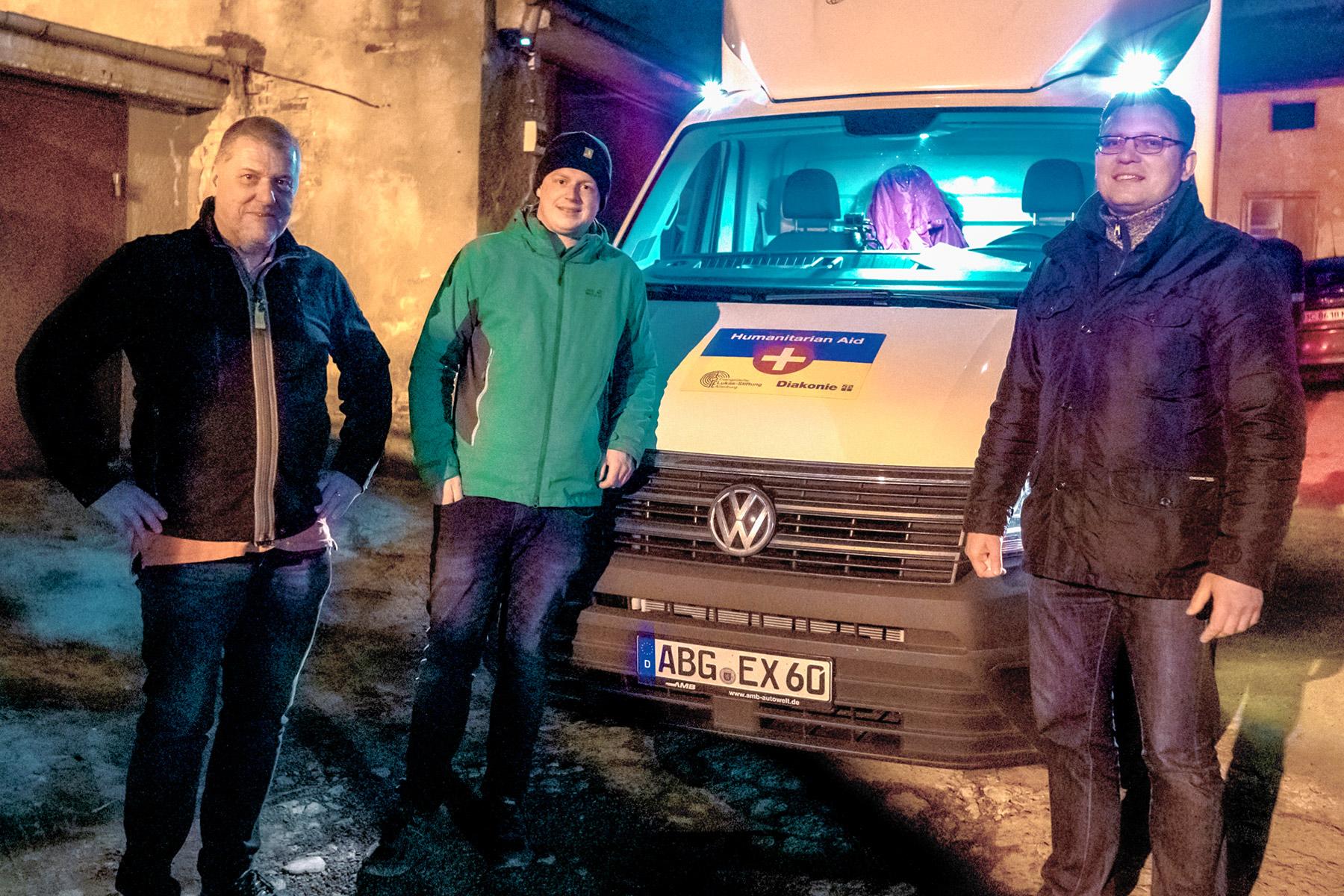 (LWI) – "I didn't hesitate for long. People in Ukraine need help," says Felix Kalbe. The twenty-seven-year-old has long been involved in the Evangelical Church in Central Germany as a youth representative and now works for various charitable organizations. He is currently a volunteer with the Evangelical Lukas Foundation in Altenburg, which helps the sick and injured in Lviv, Ukraine.

A ten-hour drive separates Altenburg in the eastern German state of Thuringia and Lviv, a central city in western Ukraine. Kalbe traveled to Ukraine on weekends with a small team to bring medical supplies and other materials to the local Sheptysky Hospital for the past weeks.

There have been connections between the Evangelical Lukas Foundation in Altenburg and the Sheptysky Hospital in Lviv for several years. However, the relationship is closer than ever before because of the war.

What motivated you to undertake the transport trips to Lviv?

I didn't have much time to think about this: One afternoon, my phone rang while I was having a coffee. Friends from the Evangelical Lukas Foundation in Altenburg asked me if I would go with them to Lviv the next day. Unfortunately, one driver had dropped out due to a COVID infection.

I did not hesitate for long. People in Ukraine need help. With our aid trips, we can actively provide this. With our help, an operating theatre could be set up in a very short time. Now we are working on the intensive care unit and a children's palliative care unit.

To do what I can do is an expression of loving my neighbor. I would never go to Ukraine with a weapon. But people need help, and that is what I can do.

How often have you traveled this route?

I have now driven the Altenburg/Lviv route three times. Once, however, we had relief supplies brought to the Polish-Ukrainian border and could go into Ukraine another time.

What is needed in Lviv, and where do the goods come from?

The goods come from the Evangelical Lukas Foundation, the Leipzig Trade Chamber, which donated the building materials for the operating room, and numerous associations and institutions throughout Thuringia.

Can you recall a situation that has particularly touched you?

Last weekend, we took two families from Kiev with us from Lviv to Germany. In this case, family means only women with children because the men are not allowed to leave the country. One child was seriously ill and had to be transported lying down.

The request to help the people with their flight came up at short notice. So, we had to organize an ambulance for the transport one day before our departure - which we managed to do, thank God. The only drawback was that the ambulance was not allowed to travel into Ukraine. So, we started out in Lviv with a Ukrainian ambulance and a minibus.

It was a heartbreaking farewell when the father had to say goodbye to his wife and children, not knowing if the family would ever meet again. With flashing blue lights, we then drove in convoy through Ukraine to the border, where the German ambulance was already waiting for us.

On our way through Poland, a video message reached us on WhatsApp. The father who had stayed behind thanked us again with tears in his eyes. We had taken his family out of the war zone. Since we left, there had been a bomb alarm in Lviv, and everyone was stuck in a bunker.

Overall, how did you experience the current situation in Lviv and along the way? Have you observed any changes in the last few weeks?

We have changed our route and no longer cross the border at Przemyśl but through the Trans-Karparts. It means that we are on the road in Ukraine an hour longer, but we save several hours at the border - and see more of the country. The people in Ukraine are open-minded, grateful, and extremely friendly.

Despite all the hardships of war and the constant tension caused by the wailing sirens, people approach us, invite us for a coffee, or wave at us excitedly and gratefully. At the same time, we hear of Russian spies that have been arrested. Also, the controls in the country are being intensified. In the evening, when we drove to Lviv for the last time, we were stopped more often than ever before. A few hours earlier, Russian bombs had hit the city.

Wouldn't it be easier to drive with a big truck instead of a van?

For us, a large truck is not easy to handle. But in the meantime, we have found a forwarding company specializing in exactly this. It is even a non-profit. A Berlin fashion designer has set this up and drives to Ukraine for fuel costs. She delivers to locations there that we indicate to her. A large load of relief supplies, i.e., medicine, building materials, and equipment for intensive care and palliative care units, is planned for the Sheptysky Hospital.

What does it mean for you to be part of a worldwide church community in the current situation?

The hospital in Lviv is a church hospital. And when we stay overnight in Lviv, we stay at the Greek Catholic monastery. Especially in times of war, denomination or hymnals no longer count. It is the Christian that matters; it is the human being that matters. It is an act of love for the neighbor to help and pray. Prayer gives support and security. On the way, in Lviv, and at home. Prayer is the strongest weapon we can use against this senseless violence.