Germany: Contributing to the communion of churches

The German National Committee of the Lutheran World Federation received much appreciation for its commitment to holistic mission through supporting LWF in its work in communion relations, theology, diakonia and advocacy, in the 75 years since it was founded. 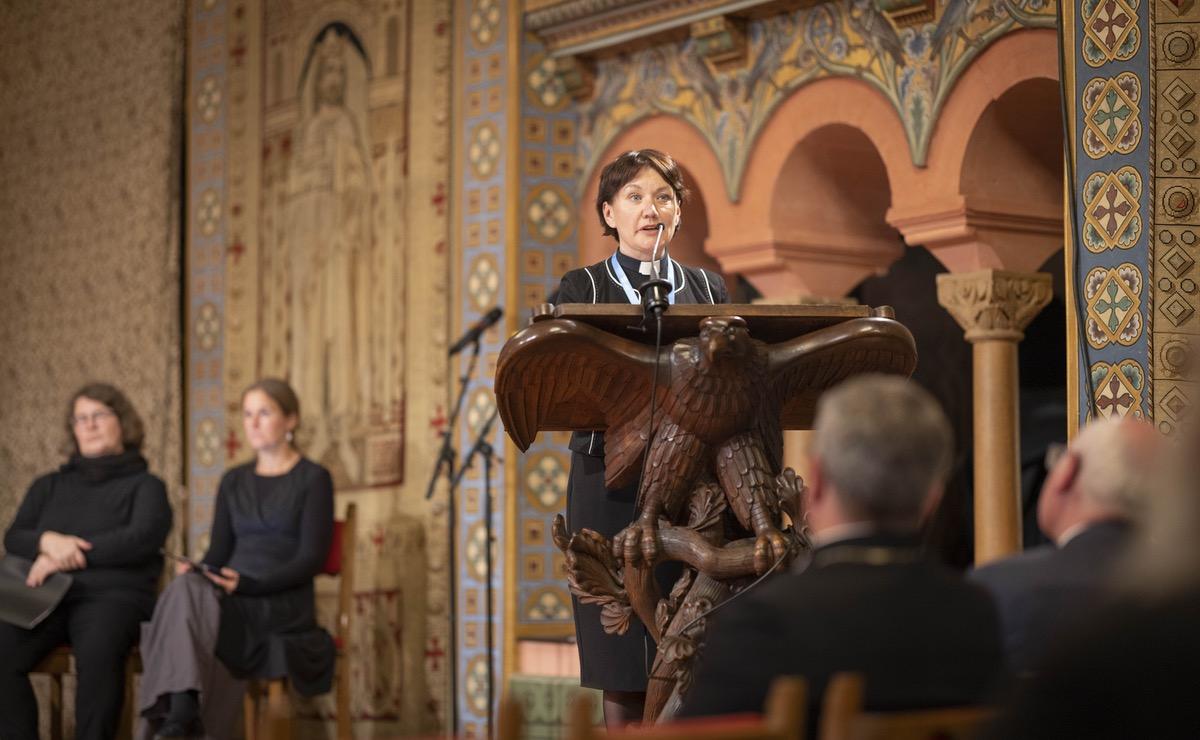 LWF General Secretary Anne Burghardt during her address at the celebrations of the 75th anniversary of the GNC/LWF. Photo: TSK/Paul-Philipp Braun

The 75th anniversary of the GNC/LWF celebrated in Eisenach

(LWI) – The year 2022 marks the 75th anniversary of German National Committee (GNC/LWF) which was founded just a few months after The Lutheran World Federation (LWF). The GNC/LWF celebrated the anniversary at the historic Wartburg Castle in Eisenach, Germany, on 7 October.

Guests from the church, politics and society attended the festivities. In addition, participants of the Church Leaders’ Consultation of the Central and Western Europe Region joined the celebration, as well as participants of the first meeting of the Assembly Committee in Germany that is preparing delegates from the eleven LWF member churches in Germany for the Thirteenth Assembly.

A global communion always represents a table at which its members can take a seat as family members, said GNC/LWF Chair Frank Otfried July. Therefore, it is vital to search for that which unites. The former bishop of the Evangelical Lutheran Church in Württemberg said that the German churches should avoid getting preoccupied with minor problems.

A global communion always represents a table at which its members can take a seat as family members.

Looking back at the history of the LWF, the chair of the Historical Commission of the GNC/LWF, Klaus Fitschen, emphasized the tension between autonomy and dependency in a communion. The LWF constantly strives for an inner center, “for communion, for communio, despite the cultural, theological and political plurality that the member churches bring with them.” Maintaining these efforts for 75 years is admirable.

Bishop Friedrich Kramer of the Evangelical Church in Central Germany emphasized the role of the LWF as a “translator in the spirit of Luther.” He said that the LWF communion acts as an explainer, mediator and expert for understanding across cultural boundaries. It is also a specialist in worldwide Lutheran theology and its subtle distinctions. The LWF communion “acts as a bridge builder in ecumenical conversation across old trenches of war.”

Holistic mission based on four pillars

LWF General Secretary Anne Burghardt gave an address as part of the celebration. She underscored Eisenach’s historical significance by recalling this year’s 500th anniversary of Martin Luther’s September Testament. This German New Testament translation, which originated at Wartburg Castle, set new standards for accessing biblical content by parishioners and the German language. It also, it served as a source of inspiration for many more translations of the Bible into vernacular.

She also pointed to the first meeting of the Lutheran World Convention, the predecessor of the LWF, in 1923. One of the main initiators behind the founding of this World Convention was Swedish Archbishop Nathan Söderblom who already then talked about Lutheranism being polycentric. The LWF itself was founded in Lund, Sweden, in 1947, after World War II.

Burghardt elaborated on the four pillars of the LWF from its founding years and their relevance today. The pillars are service to those in need; joint efforts in theology; joint ecumenical efforts; and common initiatives in mission. They aim to witness the Christian faith as a holistic mission in word and deed. “It is an ongoing task for the LWF and each member church to reflect on how these different aspects are represented and balanced in their life and work,” said the LWF General Secretary.

She congratulated the GNC/LWF and said the German member churches formed an important part of international Lutheranism. She added that these churches significantly contribute to the communion of Lutheran churches in both theological and diaconal matters.

The organization’s commitment to climate justice, gender equality and global peace is more needed than ever in times of energy crises, cruel wars, rising sea levels, famine or discrimination against minorities and persistent racism, Ramelow said. Moreover, with their overarching church work, the LWF and the GNC/LWF carry the basic consensus of Lutheranism into society, said the professing protestant Christian.

The Catholic Bishop of Magdeburg, Gerhard Feige, described the LWF and its German National Committee as an important ecumenical partner. Bilateral dialogue has not always been easy, but it has been of great importance, said the Chair of the Ecumenical Commission in the Catholic Bishops’ Conference.

The musical accompaniment of the evening was by Uwe Steinmetz. Together with a vocal and instrumental ensemble, he presented impressions from the different regions of LWF. The pieces are part of the project “Lutheran Hymns and Rites 2024 - A global Achtliederbuch as an expression of Lutheran Identity in and through liturgies and their music,” to be completed for the Thirteenth Assembly in Krakow in 2023.

Brazil: Be relentless in the work for peace
news
tt
test news