A future beyond kiosk work 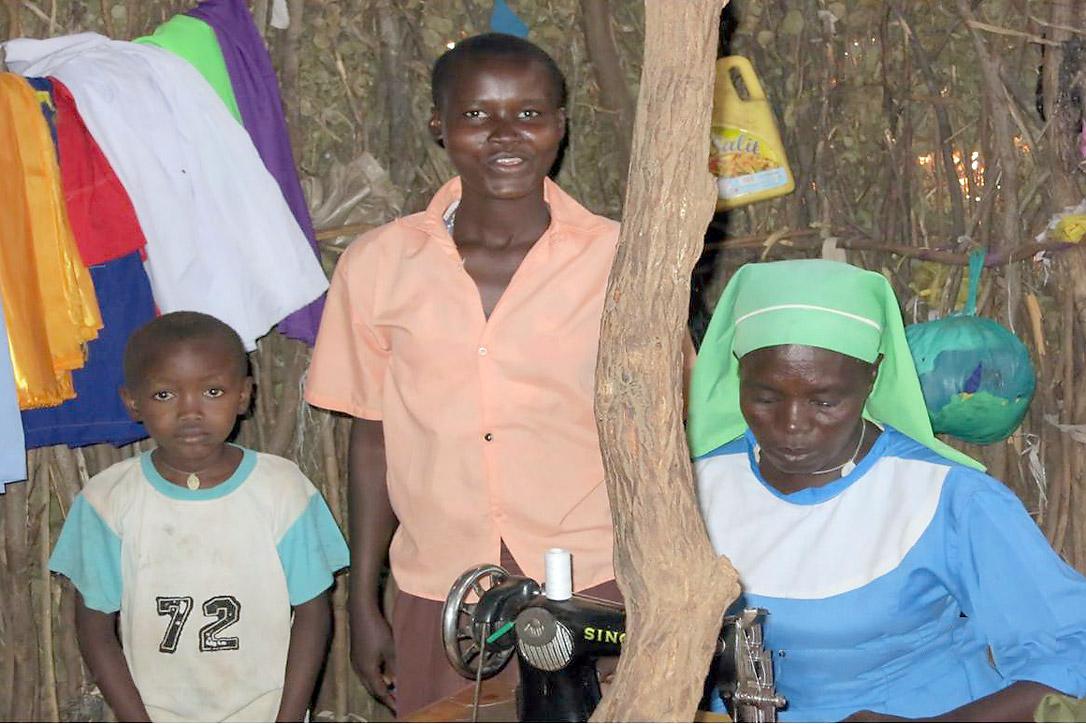 Beatrice, centre, with her guardian and one of her brothers inside the tailoring shop that serves as the familyâs source of livelihood. Photo: LWF Kenya-Djibouti (Kakuma Office)

(LWI) – Beatrice Emuria, a Kenyan girl from a community near Kakuma refugee camp, started providing for her family before she was ten years old.

The family’s misfortune began when she lost her father, the family’s sole breadwinner. Beatrice was only two years old. Her mother was unable to get a job and provide for the family. “We didn’t have enough clothes to wear and would often go to bed hungry,” says Beatrice. “We were so thin and weak.” The family had no property and lived from hand to mouth, barely managing to survive.

By 2010, Beatrice was deemed old enough to contribute to the family income. She joined other children from the villages near their homestead and went straight into Kakuma refugee camp in search of work. “I was among the younger ones. I didn’t even know what kind of work I could do but I was driven by the desire to have something to eat every day… anything,” she says.

Children do not bargain or complain

She got a job in one of the many food kiosks in the camp. All day long, she would fetch water and wash dishes together with other children. “I didn’t like the job because it made me skip classes but I continued doing it because that was the only way I was able to obtain food for myself and take some home to my mum and younger brothers,” she says. “My performance in school suddenly dropped and I even lost interest in school.”

Kiosk owners and other business people in the refugee camp prefer to engage children as workers because “children cannot bargain for better pay, children cannot complain about poor working conditions and children don’t steal from the employer,” Beatrice explains. She remembers how, while they were working, they would encourage one another and share their aspirations and future plans.

According to George Thotho, LWF’s Senior Child Protection Officer, as many as 3000 children from the host community were engaged in child labor and other forms of child abuse within the refugee camp, Kakuma town and some of the adjacent villages. “The situation was so bad. You could see very young boys and girls working as porters in the market, others sweeping in shops and even washing cars. We sat down with the community to design a program to try and address the situation,” Thotho says.

Beatrice’s story, however, has a happy ending. In June 2013, LWF started a project aimed at withdrawing children from child labor. It was funded by Terre des Hommes and the Evangelical Lutheran Church in America. Beatrice was among the children to be included. Withdrawing her from the work at the kiosk and setting up a better living situation took concerted efforts by LWF, the District Children’s Officer, community child protection structures, local chiefs and the police.

Beatrice has been adopted by her sister-in-law together with her two brothers. She rejoined school and is now attending sixth grade at Lopwarin Primary School, Kakuma Division. Her teachers say her academic performance is impressive.

To ensure Beatrice does not return to work, LWF also supported her new guardian with training on business management and start-up capital for a small business. Her guardian is currently operating a successful tailoring enterprise which allows her to meet all the family’s needs. “It’s important for the family to be self-reliant so as to deter the children from returning to child labor,” Thotho says. So far the program has managed to rescue 600 children from child labor. They have been enrolled in school and provided with uniforms and other scholastic materials.

Having experienced the harsh reality of child labor, Beatrice is grateful for the opportunity to go back to school. “There are still very many children working in the camp and in town. When I grow up, I want to be a teacher so that I too can help change the lives of other children,” she says.