French churches push for gender equality at all levels 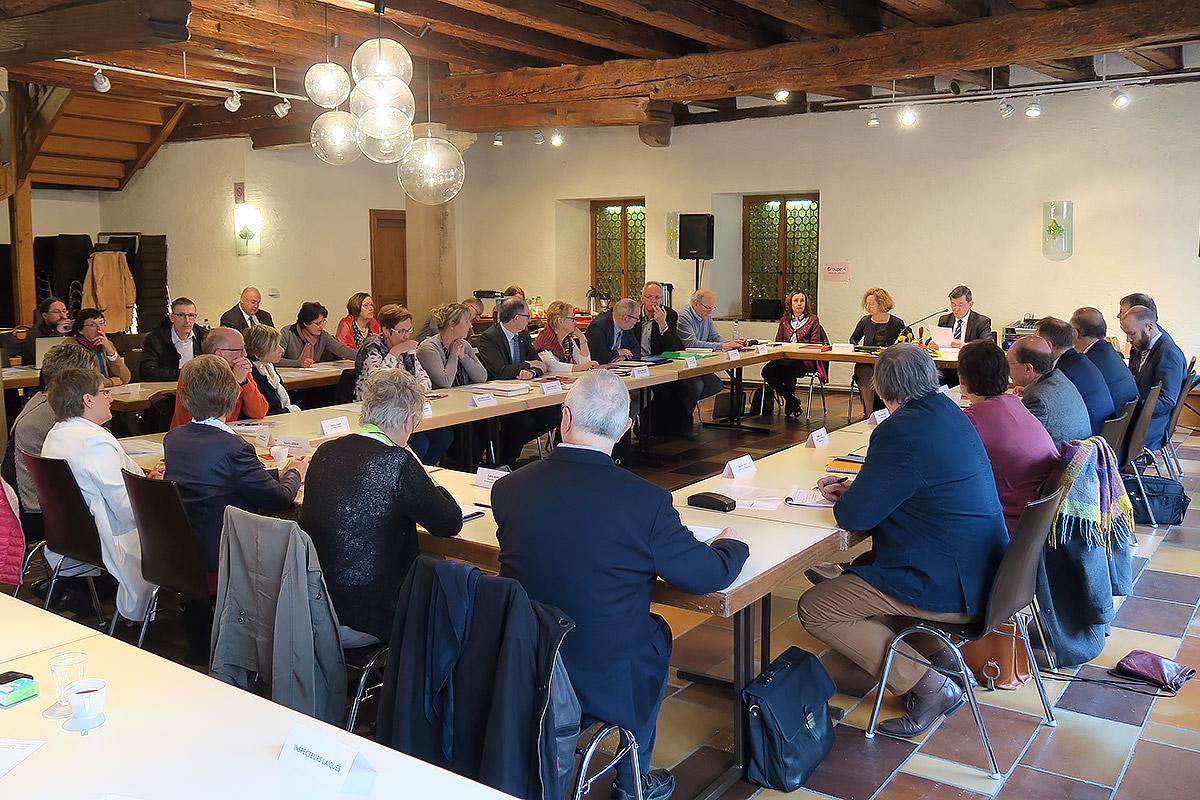 The UEPAL consistory meeting had a long discussion before adopting the statement. Photo: UEPAL/ Bernard Guillot

(LWI) The Lutheran Church of Alsace - member of the Union of Protestant churches of Alsace and Lorraine (UEPAL) in its consistory has adopted a gender and youth quota according to the recommendations of The Lutheran World Federation (LWF). In their “Statement on balance and equity between women and men in the church”, the consistory committed to reach as much as possible the quota of at least 40 percent women and 40 percent men in each decision-making body, as well as a representation of at least 20 percent youth and young adults who are 30 years old or younger.

“The respect due to every human being must be lived first and foremost with the closest of our neighbors, our sisters, wives, mothers, daughters or co-workers,” Christian Albecker, president of the UEPAL, said. “For Protestant Christians, the humanity desired by the Creator is one, just as God himself is one: ‘In the image of God he created them, man and woman he created them’ (Gen. 1.27),” he quoted, adding: “Unity does not mean uniformity, but difference does not have to mean inequality.”

The members of the consistory were called to analyze and to take action to overcome gender stereotypes that maintain women in certain roles within the church and to deliberately support women who assume higher leadership positions. In the same way, the statement commends the parishes and all the church structures to denounce acts of violence against women, to take a firm stand against sexual harassment and to extend the criteria regarding balance between women and men to the communities supported through UEPAL’s missionary projects and to the allocation of scholarships.

The proposal put before the main decision-making body of UEPAL was taken from the LWF quota for gender and youth, adopted in 1984 and 1990 respectively. The LWF Gender Justice Policy (GJP) had been sent to the Consistory members to study. Maria Cristina Rendón, LWF Program Assistant in Women in Church and Society (WICAS) was invited to give an introduction to the theme and to showcase the way the GJP has been put into life by member churches in different contexts. After, UEPAL governance met in smaller groups to discuss challenges for equal participation, and possible ways to overcome them.

By approaching today this theme, which can only be the beginning of a process, we receive a reflection and proposals that are ours because of our membership in the Lutheran communion.

UEPAL president Albecker recognized the challenge: “Just as in Jesus Christ the image of God has been profoundly changed, so must the relationship between man and woman be removed from the archaic schema of male domination inherited from the depths of the ages and male stereotypes of thought characterized by competition, and often by violence,” he said.

“By approaching today this theme, which can only be the beginning of a process, we receive a reflection and proposals that are ours because of our membership in the Lutheran communion.”

The LWF welcomed the UEPAL statement on balance and equity. “The churches have had the courage to examine their own structures and realities in terms of gender justice  throughout a highly participatory process and have thought of the tools that will ensure its implementation and accountability,” Maria Cristina Rendón, WICAS Program Assistant said. “It is encouraging to perceive how UEPAL entrenched the principles of LWF’s Gender Justice Policy into their own decision-making process and in the final document.”