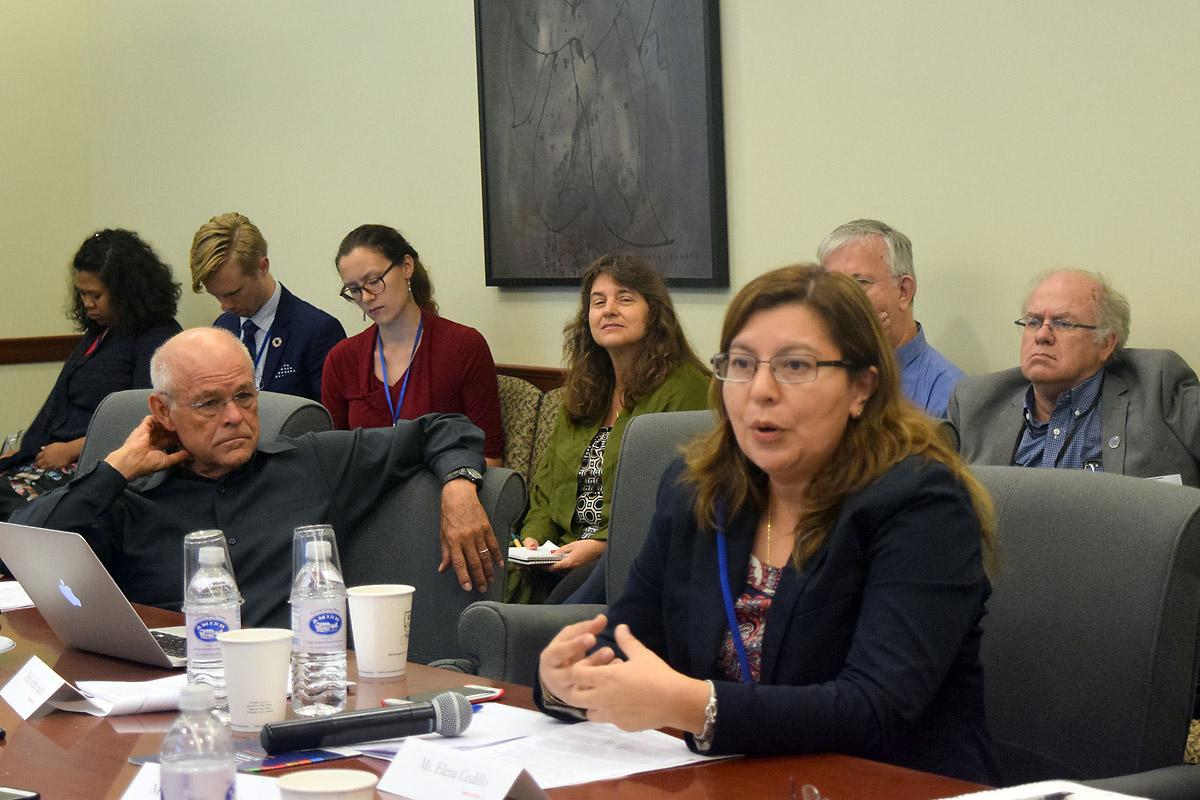 Ms Elena Cedillo, representative of the LWF Central America program, reiterated the Lutheran communion’s support for the SDGs at an international gathering in New York, focusing on mobilizing religious communities to end poverty.

“Religion plays an important role in the life of the majority of people. In the most vulnerable countries, churches and FBOs offer access to places that would otherwise be very difficult to reach,” she said.

Cedillo was one of several speakers at a 17 July side event sponsored by Religions for Peace at the UN High Level Political Forum 2017. The panelists focused on the SDGs, a comprehensive plan by the international community to strengthen peace, end poverty and promote dignified development by 2030.

The key issue when talking with government representatives is that we as FBOs have joined in the dialogue to change people’s lives. We have built relationships of trust with the communities, and we focus on the people, to ensure no one is left behind.

Dialogue between civil society and governments

As coordinator of the Latin American and Caribbean Inter-Religious Alliance for the 2030 Agenda for Sustainable Development, she spoke of the work of the broad regional coalition that includes the LWF, ACT Alliance, CARITAS and the Latin American Council of Churches among others.

The goal of the inter-religious alliance, Cedillo said, is to promote dialogue between civil society and governments regarding the SDGs. “The key issue when talking with government representatives is that we as FBOs have joined in the dialogue to change people’s lives. We have built relationships of trust with the communities, and we focus on the people, to ensure no one is left behind,” she explained.

During emergencies, communities reach out to FBOs and these faith groups want it known that they will remain because they are committed to ministering to the vulnerable and forgotten in society. “Sometimes we become the only stable structure in society, and many times we are the only ones who stay behind after the emergency situation,” Cedillo added.

Partnerships with the vulnerable

Cedillo urged FBOs to spend the next two years in forging new kinds of partnerships, particularly with vulnerable communities, to work on the SDGs, including monitoring governments’ response to the UN goals.

“Faith-based organizations share the values of love, equality and justice, peace and service, and we are seen as potential promoters of change. In many parts of the world we promote different development issues and exert influence,” she emphasized.

“We can translate the ‘local to global’, encouraging communities to propose ‘their’ agenda. As part of the civil society, we unite and lift up our voices, urging the compliance of human rights,” the LWF representative added.

At a second side event of the UN high level meeting on development, which focused on reducing inequality in Latin America and the Caribbean, Cedillo said it was impossible to speak about human rights without addressing the issue of climate change.

She noted the agricultural sector has been hard hit by drought, which has then led to poverty in rural areas, and called for innovative projects to help sustain the ecology. She explained further LWF’s emphasis that climate change mitigation and adaptation should not focus only on the economic aspect but also on people. “People affected by climate change lose hope, life plans and way of life.”

Referring to the cash transfer assistance to those affected by drought in the dry corridor, she said it was important to respond in a way that promotes the local economy. “We organize, mobilize and encourage people to buy from local farmers.”

The UN has indicated new openness to the contributions of FBOs as the world family of states commits to sustainable development. And the LWF is well placed through its international development and relief arm, World Service, and member churches around the world to help provide service and solidarity with the vulnerable.

(A contribution by Christine Mangale, Program Director, the Lutheran Office for World Community in New York)