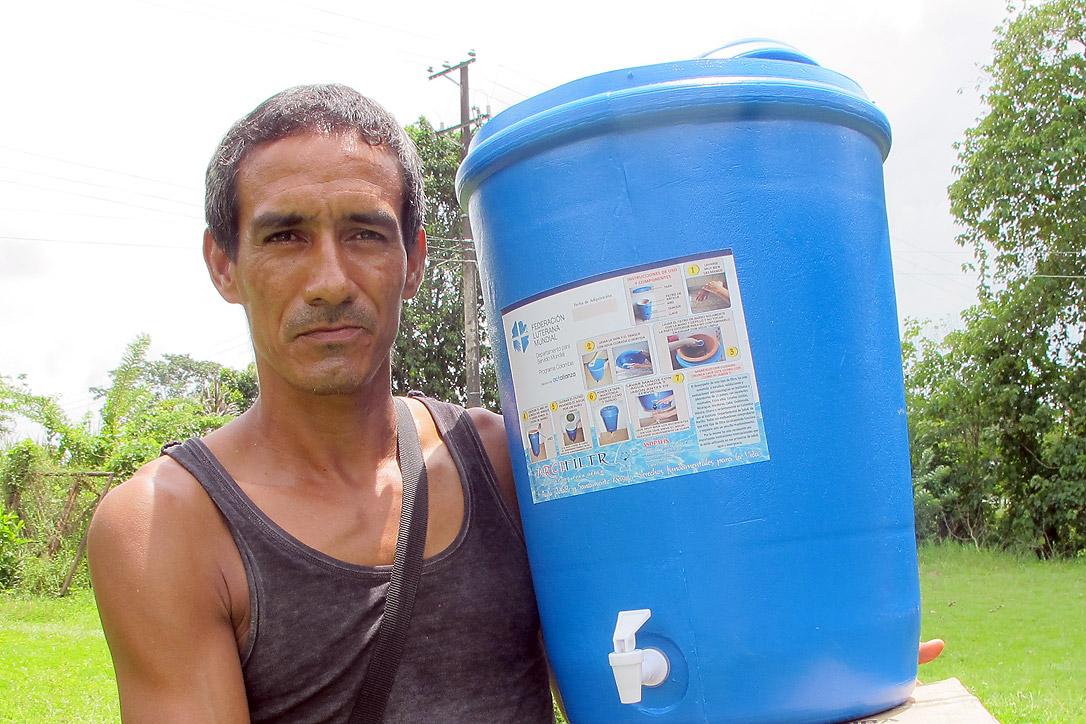 Alexis Mendoza and his family received a water filter in Saravena so they can improve their health after severe floods in May and June. Photo: LWF Colombia

“You are a helping hand”

(LWI) – "It is one thing to tell the story,” Alexis Mendoza says, “but it’s another thing to experience it. It is difficult to lose your animals and have all your crops damaged. You already have very little and then, on top of everything, nature punishes us that way.”

The 39-year-old farmer lives with his mother, his wife and three young children in Cobalongos village in the municipality of Saravena, department of Arauca, located in the eastern part of Colombia near the border with Venezuela. His family was among the 1,296 households affected by floods caused by the overflow of the Arauca, Bojabá, Banadías and Madrevieja rivers in May and June. They lost their entire harvest of the staples cocoa, bananas and corn – in the muddy waters.

Although floods occur every year, they are usually mild and help maintain the area’s fertility. However, this year they reached an unprecedented level and duration. In addition to material losses, the disaster reduced clean drinking water and increased the danger of waterborne diseases.

The Lutheran World Federation (LWF) Colombia program and ACT Alliance responded by delivering 850 water filters to the affected families recently. The Mendoza family was among the recipients. LWF is also conducting training on water, sanitation and hygiene programs, sustainable livelihoods and on risk management, to prepare the families for future emergencies.

"These donations mean a lot to us because we had not received support from anyone until you came,” Alexis Mendoza says. "To me, you are a helping hand that is being extended without asking anything in return. You have shown us the light at the end of the tunnel."

While the immediate danger has been mitigated, several farmers like Mendoza still live in fear of the next disaster. "I was born and I raised on this piece of land, but never experienced anything like that before. We're wondering what will happen next year."

Although Mendoza has resumed farming, he incurred debts as he still had to pay for the seeds lost. "Some residents have even thought about leaving because they are afraid, but do not know where to go. It is very difficult," he adds with a worried face.