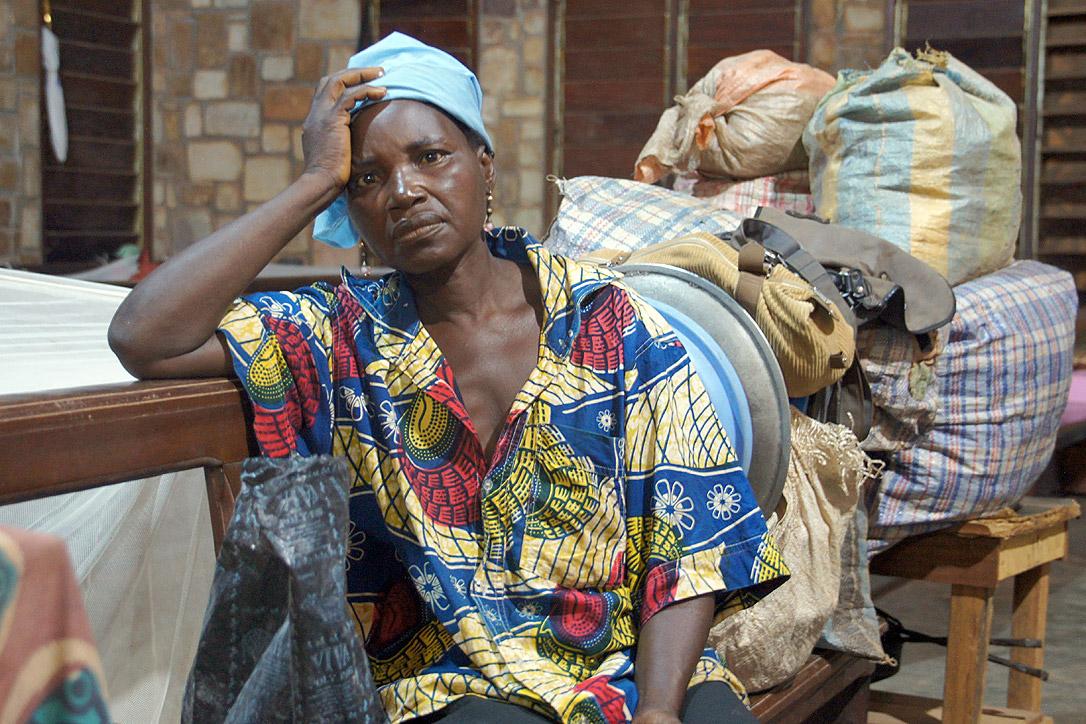 (LWI) – It is Sunday evening at the St Timothy Lutheran Church in Bangui, and the main gate to the stone-walled compound is locked. Inside the poorly lit compound, different activities are going on: children running around playing; small groups of young people gathered under two largely empty tarpaulin tents, a woman stoking an open fire as she prepares a family meal, and some mothers with children standing near the church door.

At the parsonage, the parish pastor Rev. Paul Denou and a few people are seated under a thatched reception area, engaged in a lively discussion on the differences between an internally displaced person (IDP) and a refugee. “And does it matter in the end, whether you are here or outside the country? The fact is, you have been driven out of your home,” says Mr Jean Georges Haman, somewhat concluding the debate.

A retired police commissioner, Haman, 65, and six members of his family have been living at the Bangui parish of the Evangelical Lutheran Church of CAR (EEL-RCA) since December 2013 after armed groups raided their home in the capital’s Fondo neighborhood. “We fled with nothing but the clothes on our back,” he recalls. All together, 17 members of his family were displaced during the attack. None of them has been able to go back home, as many houses there were destroyed and looted, and armed militia groups allied to the Séléka rebels or retaliating anti-Balaka groups continue perpetrating violence including kidnappings, torture and killings.

Haman is among the 120 displaced persons currently living at St Timothy Lutheran parish, some 500 meters opposite the M’Poko International Airport. In Bangui, more than 142,000 IDPs have sought refuge in church buildings, mosques, open fields near the airport and other sites, as well as with host families.

“At the height of the crisis in December this place was overcrowded,” Denou says, gesturing towards the now largely empty tents that he says accommodated up to 1,800 people, from all sections of the capital. Despite the church being a place of refuge, it has not been spared of armed attacks, the Lutheran pastor says, showing a bullet hole on the side of his bedroom window, after an armed group scaled over the compound wall on 23 February. “They ransacked the house, took away money, TV screen, church motorcycle, a child’s bicycle … anything they could carry. But luckily, no one was killed.”

Many of those who have opted to continue staying here support each other in creating a conducive living environment while struggling to provide for themselves and their families. Assistance received from local and international non-governmental organizations has dwindled, the Lutheran pastor says, as many IDPs mainly join the growing number of refugees in neighboring countries. “How can we make it without this solidarity? There is very little help coming in nowadays,” he adds.

“With no formal security in place, or other assistance, we organize ourselves in teams that make the parish compound function in an orderly manner,” Denou notes. Angèle Vanguéré, a volunteer, explains her work in the hygiene and sanitation team at the Lutheran site. “As the person in charge of displaced women, I make sure the little water available is distributed well, that the latrines are clean, look out for those who are sick and refer them to hospital, and support the others in keeping the place clean.”

Inside the church: women, men, children and young people, are seated alone or in groups on pews, cardboards, light sleeping mats or the few mattresses on the floor, under mosquito nets or quietly alone in a corner. Behind one of the pillars, Armelle Kagale spreads out a sleeping mat as she pushes aside a big basin packed with small blue polythene bags, each containing pieces of charcoal, weighing around 500 grams. She buys in bulk and retails at about 750 CFA francs (1.50 USD). Recently diagnosed with tuberculosis, Kagale says she doesn’t know how she will buy medication, as she can hardly feed herself with what she makes in a day.

Near the church altar, Ruth Nambeyam cuddles her five year-old son Michel Biro, his sister Esther Yvele, seven, standing silently beside, occasionally touching her brother. The boy had been hospitalized recently because of malnutrition. Vanguéré reassures the mother: the church team will support her in getting the prescribed treatment. But it is difficult, since some of the non-governmental organizations that were providing free treatment in the city closed down because of insecurity.

Seated on another church pew with bags containing her few belongings, Naomie Komessé takes in the scene around her: clothes airing on pews, slippers strewn across the floor, cooking utensils, water bottles in a plastic bucket, several mosquito nets secured across the pews, and more. She doesn’t say much. She nods, for now she is secure here.

Dialogue in the Community for Peace

Back at the reception area, pastor Denou and the security team discuss the deteriorating security situation, and the growing fear and uncertainty for civilians, since political tensions in December 2012 peaked to widespread attacks by groups linked to the Séleka rebels and subsequent retaliations by the anti-Balaka militia groups. “Who would have thought it could ever come to this?” the Lutheran pastor asks. “We have always lived peacefully side by side–Muslims, Christians and other faiths,” he adds.

At the church headquarters in Bouar, some 400 kilometers northwest of the capital, EEL-RCA vice-president Rev. Jean Gbami emphasized the overwhelming need for assistance to civilians and urgency for dialogue in order to get out of the current impasse. “Everyone is affected by this crisis. We have lost a lot and people live in fear of more attacks,” he said during a meeting with staff from The Lutheran World Federation (LWF) emergency team in CAR.

Gbami explained that the Lutheran church and leaders from the Muslim and other Christian communities have formed an interfaith peace platform to encourage communities to work together to end the violence and restore peace in the country.

“Religious communities play an important role in restoring peace in the Central African Republic. We will continue building on this collaboration with the Lutheran church in order to respond to the needs of the most vulnerable people affected by this crisis irrespective of their faith affiliation,” adds Serena Badenhorst, leader of the LWF emergency team in CAR.

With support from the LWF and its partners in the ACT Alliance network, EEL-RCA has been providing food items to thousands of IDPs in Ouham Péndé and Nana Mambéré, and in the parish in Bangui. Assistance by the LWF emergency program to displaced populations in the northwestern prefectures includes non-food items to restore food security and access to water, sanitation and hygiene.

According to the United Nations Office for the Coordination of Humanitarian Affairs, CAR had registered more than 560,000 IDPs and nearly 350,000 refugees by 15 May. An estimated 2.5 million people (54 percent of the population) are in need of humanitarian assistance.

(Interviews for the feature story were conducted in May during visits by the LWF emergency team members in CAR.)