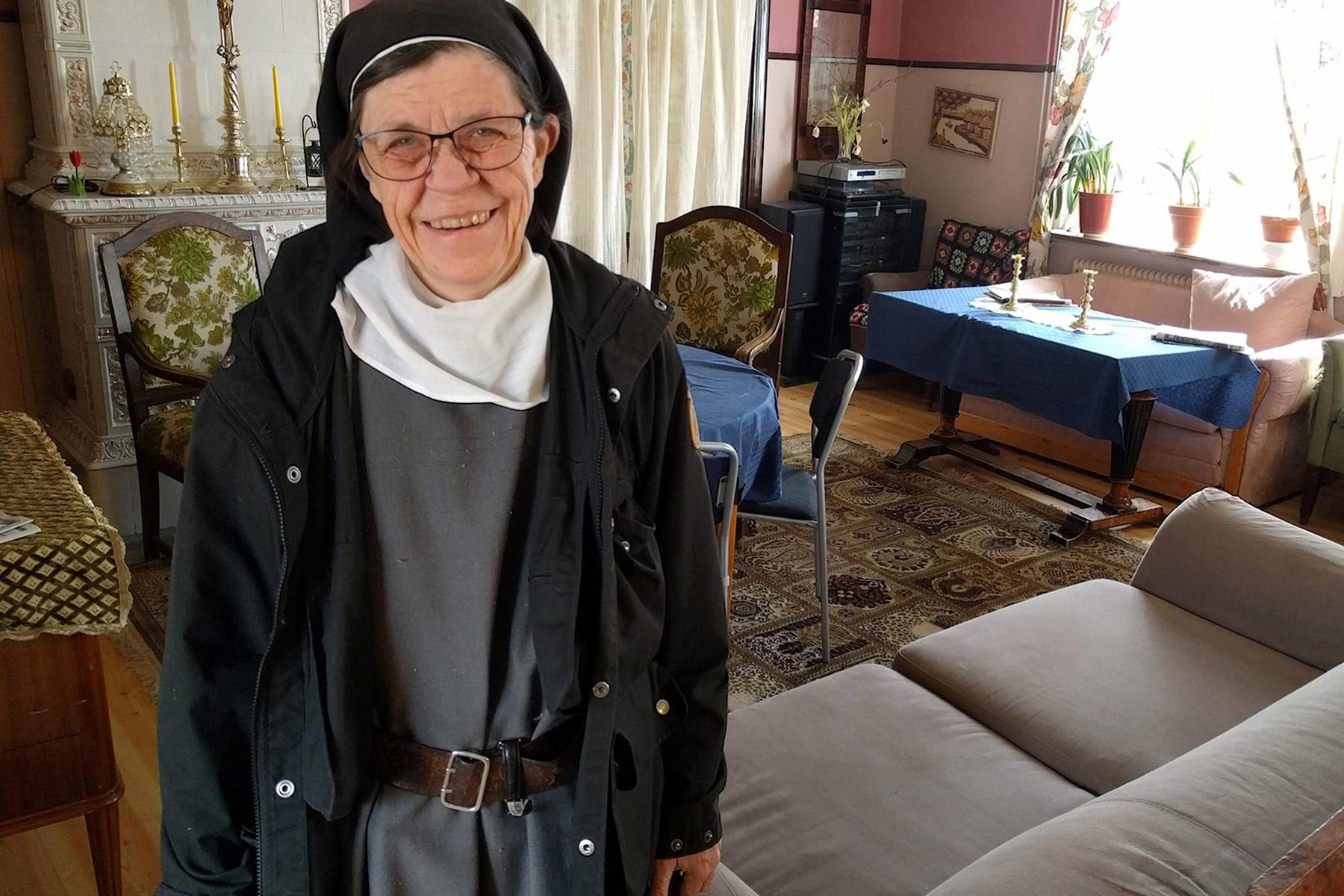 (LWI) - People of faith have a particular responsibility to lift up the voices of refugees and asylum seekers who are still perceived by politicians as a problem to be solved, rather than seeing their presence as “a gift” and an opportunity for growth.

Swedish Lutheran Sister Karin Johansson knows just how difficult it is to change the minds of legislators and decision makers responding to the influx of refugees in her native country. For the past four decades, she has been lobbying on behalf of thousands of individuals and families who have showed up on the doorstep of the Alsike convent near Uppsala, where she lives with another sister and two women in training for religious life.

Alsike Kloster was founded by Marianne Nordstöm, the Church of Sweden’s first nun since the reformation, who took vows in 1954 and established the convent in an old schoolhouse ten years later. In the 1970s, the local Quakers asked if the sisters would be willing to host some asylum seeker families and they opened their doors to these “guests” in need. The small community became well known to local authorities and to the police who have raided its premises in search of such “illegal” immigrants.

After one such raid in the 1980s, a number of asylum seekers were deported to their countries of origin, but the sisters took their case to lawyers at the European courts who won the right of return. Since then, Johansson has been studying refugee law and cooperating with the U.N High Commissioner for Refugees (UNHCR), while offering a warm welcome and a safe place to stay for up to 60 guests at a time.

Johansson told her story as part of a webinar panel discussing the Global Compact on Refugees (GCR) and the role of faith-based organizations in refugee protection. The 9 February event was hosted by the Lutheran World Federation (LWF), the Hebrew Immigrant Aid Society (HIAS), Islamic Relief Worldwide (IRW) and the Quaker Council for European Affairs (QCEU), in partnership with other faith-based migration groups. Its conclusions will feed into the planning of a March 2022 international conference in Geneva, organized by LWF and IRW, entitled Welcoming the Stranger, Shaping the Future.

Also taking part in the panel was Mexican Catholic priest, Fr Reynaldo Rodrigo Roman Diaz, a Divine Word (SVD) Missionary running a sponsorship program for refugees for Caritas in the northern Italian diocese of Vicenza. His team works through local parishes to raise awareness of migrants’ needs and coordinate volunteers to host or provide other support services for one or two years.

Over the past year, supporting refugees has included translating into their different languages all government regulations and advice on how to tackle the COVID-19 pandemic. Like Johansson, Roman sees a primary task of faith-based organizations as that of upholding the dignity of each individual refugee or asylum seeker, enabling host communities to listen to their voices and see them “as a source of joy”.

A third panelist was Ms. Nejra Kadic Meskic, head of the Center for Cultural Dialogue and an associate of the Islamic Community in Croatia. Her center works to combat mistrust and polarization between immigrants and local communities by strengthening intercultural and interreligious dialogue. Partnering with the government, faith groups, businesses and civil society groups, the center’s New Neighbours project seeks to change the media narrative around immigration and create opportunities for integration through sports, art and other cultural activities.

Moderating the discussion was Ms. Anila Noor, a co-founder of the Global Independent Refugee Women Leaders (GIRWL) network and head of New Women Connectors, a movement striving to “mainstream the unheard voices of migrant and refugee women in Europe.” She was also one of the very few refugee participants in the first Global Refugee Forum, held in Geneva in December 2019, to seek concrete pledges for the implementation of the GCR. As such, she is acutely aware of the lack of representation for people like herself within European member states and institutions.

Each case should be looked at separately and not just as a number.

Participants highlighted the way that faith communities offer far more than just food, shelter or other basic necessities to those fleeing from conflict, persecution or hardship in their home countries. “It’s not only a question about [advocating to give] people status to stay in Sweden,” said Johansson, “but you must also have time to feel that [they] are wanted.” The sisters, she added, “have learned a lot during the years, first of all that we are all humans, with the [.....] same need of freedom and love.”

People of faith must “speak the truth” and remind politicians of “our common humanity,” she stressed. As Sweden cuts its intake of refugees and reviews its immigration laws, Johansson said she continues to “work very hard so that each case should be looked at separately and not just as a number.”

It is vital to show that each one is “a genuine catastrophe and that each person has the right to ask for asylum,” she said. Above all, she concluded, it is vital to help people “listen to their voices and perceive them not as problems, but as challenges and possibilities for our societies, because everyone has something to give.”

Related Story: A crucial role in making the voices of refugees heard.