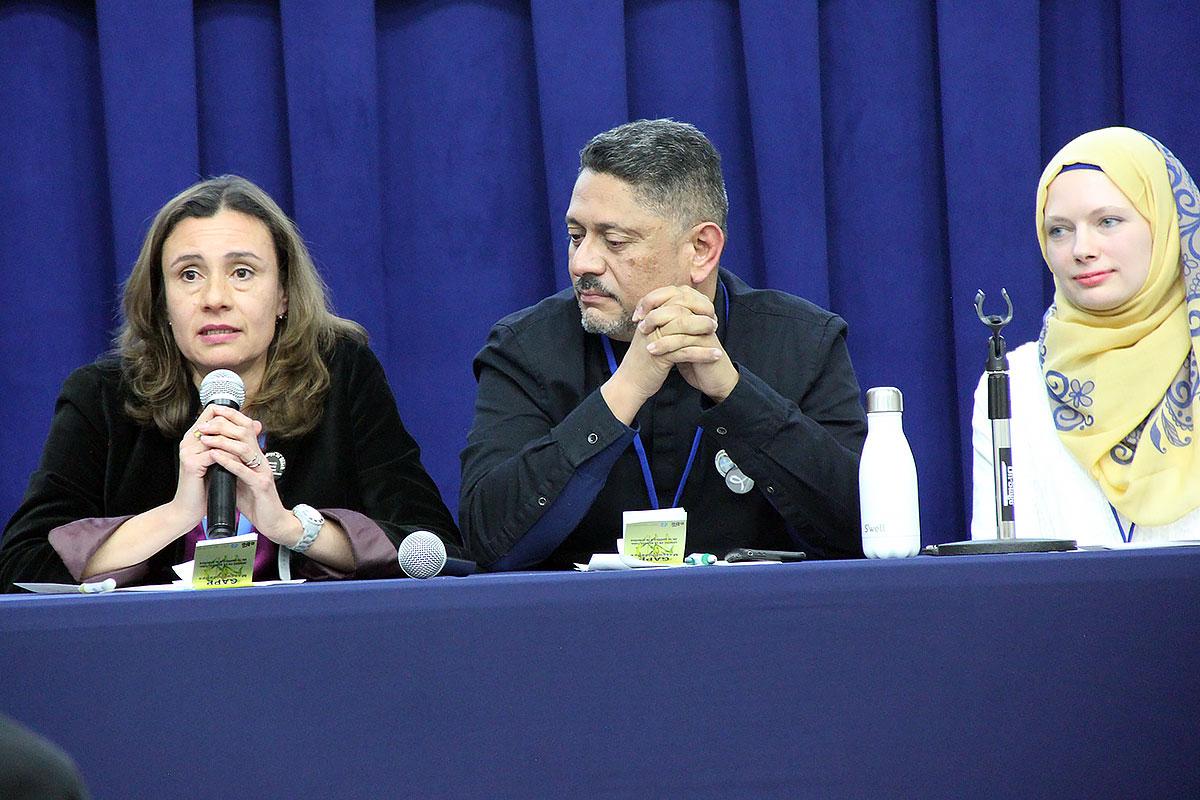 MarÃ­a Cristina RendÃ³n, program assistant in LWF Women in Church and Society speaks at the panel discussion. With her is LWF delegate Larry Madrigal Rajo, and Iman Sandra Pertek (right).

(LWI) The voices of the LWF and other faith-based organizations (FBO) have been heard at a parallel event to this year’s 62 session of the UN’s Commission on the Status of Women.

The panel aimed to position FBOs as key stakeholders in efforts to protect and promote women's human rights, and called upon the UN, governments and NGOs to acknowledge their contribution.

In her introduction to the event, Marina Mancinelli, policy specialist at UNWomen, said FBOs had a crucial role in countering the shrinking democratic space available to civil society organizations. The role of FBOs was enhanced by promoting interfaith initiatives.

At least 130 people attended the event last week, which was sponsored by the Canadian government and the United Nations Population Fund (UNFPA). On Wednesday, the faith coalition delivered an oral statement to the CSW. (create link to oral statement)

Panel moderator, Dr Azza Karam, senior advisor at UNFPA and chair of the UN Inter-Agency Task Force on Religion and Development, praised the work of FBOs.

When governments do not listen to the pledges of civil society, very often they listen to their religious leaders.

“These efforts attempt to bridge the challenges of a shrinking space for civil society to influence the negotiations regarding women’s human rights. When governments do not listen to the pledges of civil society, very often they listen to their religious leaders.”

Dr Karam pointed out that more faith actors took part in the CSW these days and that the inclusion of faith as an agenda item had expanded over the years. A decade ago, no more than half a dozen side events related to the role of faith in gender justice.

Today, with a rich agenda led by religious groups, the place of faith-based organizations as key stakeholders had increased the visibility of their work in the discussions at CSW, she said.

Panellists discussed their work in Central America, South Sudan, Mali and Tanzania and affirmed their commitment to mainstream gender justice, which has become integral in relief, pastoral and development work, they said.

LWF delegate Larry Madrigal Rajo, deputy director of Centro Bartolomé de las Casas in El Salvador, a World Service partner in Central America, highlighted the work being done with men in a country with the world’s highest rate of femicide and which still felt the aftermath of war.

Centro Bartolomé de las Casas allowed men to explore models of masculinity that don’t condition them to assume violent behaviour and traditionally dominant views in their relationships, not only with women but also with other men.

“Men involved in the program are more inclined to change and are establishing more balanced relationships and more constructive ways to communicate with women,” Madrigal said.

Rendón said the LWF gender justice policy had been a roadmap to mainstream gender justice in different contexts throughout the communion. “LWF bridges the faith-based approach and the human rights-based approach by developing language and theology that makes it possible for religious leaders and faith communities to engage with gender justice. LWF does not see a contradiction in these two dimensions.”

The Women’s Human Rights Advocacy Training, an ecumenical initiative, helped strengthening the capacity of FBOs to use UN mechanisms to raise concerns related to gender justice in their countries and bring about government action, Rendón said. Other ecumenical and inter-religious partners included 16 Days of Activism against gender-based violence campaign, through which the inter-faith coalition of FBOs has raised awareness of issues such as early and forced marriage and gender-based violence.

The audience asked panelists to share experiences of working with sacred texts from Christian and the Muslim traditions that uplifted women’s role and dignity. Others were interested in strategies that encouraged men to take part in dialogue and training to become allies in eliminating violence against women.

With Islamic Relief, Finn Church Aid and the World Council of Churches, the LWF submitted an oral statement to the CSW62 yesterday, in which they asked the UN to acknowledge the contribution of FBOs to mainstream gender justice and their participation in CSW in the outcome document.