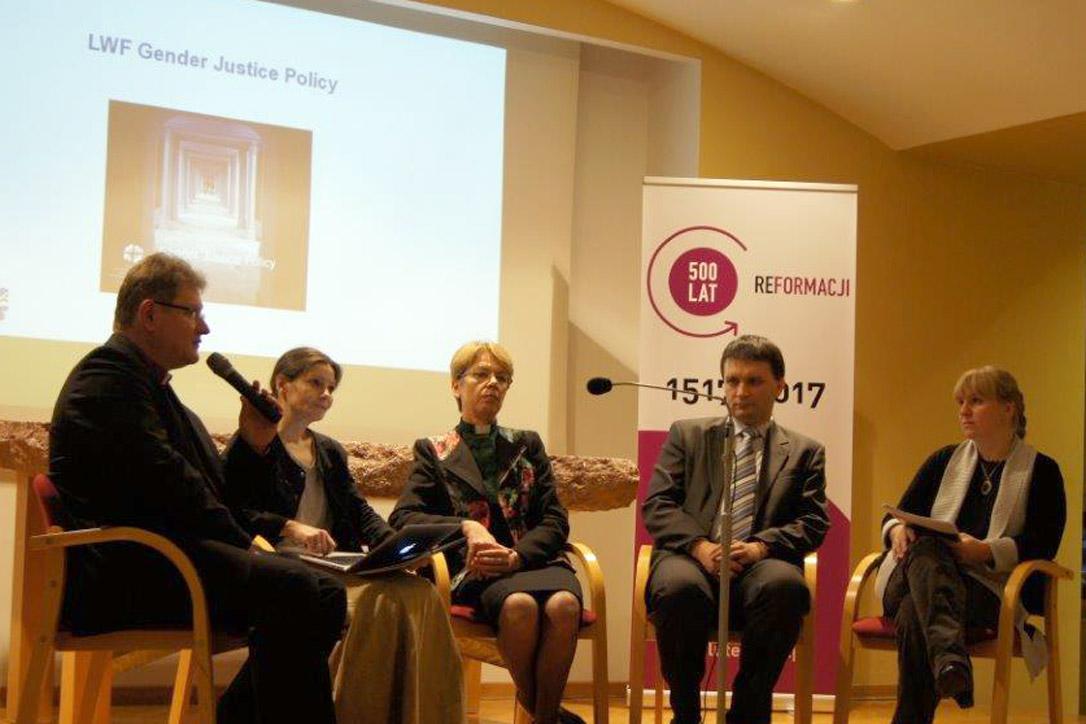 Focuses on Polish Context, Churches say NO to Violence Against Women

(LWI) – The Evangelical Church of the Augsburg Confession in Poland held a conference in Warsaw on ­19 November aimed at showcasing the Lutheran World Federation’s (LWF) Gender Justice Policy. The meeting also explored equality and gender balance in the local church and Polish society in the run-­up to the Reformation Anniversary in 2017.

“We cannot eliminate injustice in the world but we are able to have such an impact on our environment that injustice and inequality can be limited,” said Jerzy Samiec, Presiding Bishop of the host church.

Some 70 people, including Lutheran leaders, ecumenical guests and teachers and students from the Warsaw-based ­Christian Academy of Theology, attended the conference at the Lutheran Center. Three LWF publications, Churches say NO to Violence Against Women, A Faith Reflection on Gender and Power and LWF’s Gender Justice Policy, formed the basis of discussions on gender equality in the LWF and church structures.

The translation and publication of the three LWF documents is significant in the Polish context. At the last Synod session in October, Bishop Samiec said he would submit a proposal at the autumn session of the Synod in 2015 to amend internal church law to allow the ordination of women in the Evangelical Church of the Augsburg Confession in Poland. Voting will take place in spring 2016.

During the discussion process, Bishop Samiec also plans to collect information on the ordination of women based on the experiences of other LWF member churches and conduct a survey of parishioners.

LWF Assistant General Secretary for Ecumenical Relations and Director for the Department of Theology and Public Witness (DTPW) Rev. Dr Kaisamari Hintikka underlined the role the church can play in advocating for gender justice in society and expressed her satisfaction that gender issues are an important concern for Polish Lutherans.

“Today the LWF talks not only about gender equality but gender justice. Speaking of justice is not only thinking about women but also about men,” she said, adding that the LWF documents can be used as a guide and a source of information for achieving greater gender justice in Poland.

Dr Joanna Koleff­-Pracka of the Christian Academy of Theology said the LWF documents provide a way “to protect and support the dignity of women and men, created in God’s image and co­-responsible stewards of creation.”

For Deacon Halina Radacz, the “Churches say NO to Violence Against Women” is important in the context of the debate in Poland relating to a “Convention on preventing and combating violence against women and domestic violence.” The view of Lutheran churches on the issue of violence was recognized and positively received by Prof. Małgorzata Fuszara, the Secretary of State and Government Plenipotentiary for Equal Treatment, she said.

The LWF Gender Justice Policy, which was approved by the Council in 2013, is in a process of being contextualized, and studied in churches and regional platforms. Translations into the four LWF official languages plus efforts by Women in Church and Society’s (WICAS) regional networks to also make the document available in Polish, Portuguese and Kiswahili, underline the policy’s importance as a response to local gender justice challenges.