European Churches called to be messengers of hope and reconciliation

The Church Leadership Consultation of the Central and Western Europe Region focused on global challenges and the role of diaspora churches in the LWF communion. 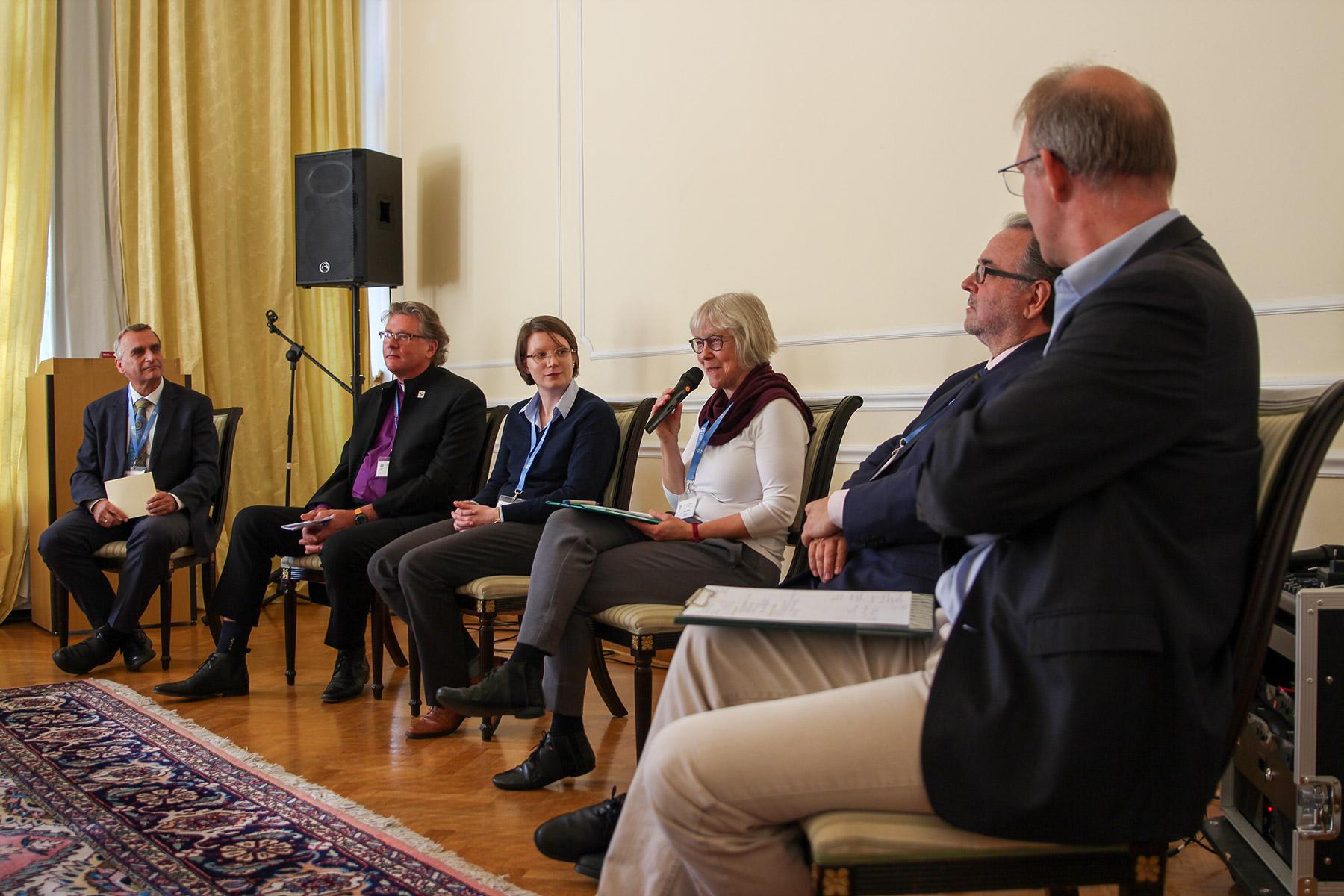 Panel on the situation of minority churches in the Central and Western Europe region. (From left) Michael Martin (moderator), Andreas Wöhle (Protestant Church in the Netherlands), Anna Krauss (Lutheran Council of Great Britain), Renate Dienst (Federation of Evangelical-Lutheran Churches in Switzerland and in the Principality of Liechtenstein), Michael Chalupka (Evangelical Church of the Augsburg Confession in Austria), and Ulrich Rüsen-Weinhold (United Protestant Church of France). Photo: LWF/A. Weyermüller

(LWI) – In the decades since its founding in 1947, The Lutheran World Federation (LWF) has aimed to respond to the challenges of the time through holistic mission in a “relevant and timely” way. LWF General Secretary Anne Burghardt emphasized this in her address to the Church Leadership Consultation of the Central and Western Europe Region, held from 6 to 7 October in Eisenach, Germany.

About forty representatives from LWF member churches in the region attended the consultation. It gathered women, men, and young people who hold leadership positions in their churches, are engaged in the field of ecumenism or are members of the LWF Council.

The LWF Vice-President for the Central and Western Europe Region, Pröbstin Astrid Kleist, was happy to welcome participants in person after a long time. In her address, she emphasized that it is the mission of the churches “to contribute to society perceptibly and credibly through our faith that gives us strength, hope and orientation.”

It is the mission of the churches to contribute to society perceptibly and credibly through our faith that gives us strength, hope and orientation.

Also, churches are called to live in communion with one another despite “the differences that characterize and define us.”

In her address, the LWF General Secretary focused on the contextual challenges the LWF is addressing through its work. It is crucial for the LWF and its member churches to always consider the question: “How can we be messengers of hope and reconciliation?”

The role of churches in society is “not to be instrumentalized by politics, but to stand up for human dignity and reconciliation.” Reconciliation, however, cannot simply mean calling on the oppressed to reconcile with their oppressors without expecting them to “repent or heal their memories.”

“Without justice, there can be no lasting peace,” Burghardt said. “At the same time, as Christians, we should remember that it is God who brings about reconciliation, but we are participants in the process.” Peace, reconciliation, and conflict resolution will be high on the LWF’s agenda in the coming years.

Regarding the war in Ukraine, which is of specific concern to the region, the General Secretary praised the extraordinary commitment of the LWF member churches and humanitarian partners in the region and neighboring countries.

She also highlighted that the response to the war in Ukraine must not come at the expense of the risk of funding for work in other regions affected by armed conflict and crisis. LWF World Service maintains more than 20 country programs in various crisis areas. “We continue to work and advocate for those suffering in these places across the globe,” Burghardt said.

During a panel discussion, participants in the regional consultation focused on the situation of churches living and witnessing in minority contexts. The moderator of this discussion, OKR Michael Martin from the Evangelical Lutheran Church in Bavaria, said the smaller churches of the region are called to be the “salt of the earth” in their unique way.

In this regard, the Bishop of the Evangelical Church of the Augsburg Confession in Austria, Michael Chalupka, used the words a “Protestant adventure in a non-Protestant environment.” This is how the Austrian theologian Wilhelm Dantine (1911-1981) described following Christ in countries where Protestants are a minority. Today, he said, congregations in his country have changed, also thanks to people who fled Iran and have now converted to Christianity. Also, “diakonia is the pulpit of justice,” Chalupka said. Here Christian witness finds its expression in concrete action.

Lutheran churches in Great Britain are characterized by being “non-British”, said Anna Krauss, General Secretary of the Lutheran Council of Great Britain. Mostly, people who immigrated or fled their home countries in the decades after World War II are affiliated with Lutheran congregations. Currently, the effects of Brexit are also being felt in the situation of asylum seekers, which has deteriorated. As a result, the church now focuses on combating racism and other forms of discrimination in society.

The Secretary for International Relations of the United Protestant Church of France, Ulrich Rüsen-Weinhold, described a process initiated by the synod, “Mission and New Ministries and Offices”. Through this, the church wants to establish additional ministries besides the pastorate. In addition, there are efforts to carry theology into secularized society. This is done, for example, by offering lunch programs in inner-city churches for working people to attend during their break.

The Protestant Church in the Netherlands is responding to secularization, said Andreas Wöhle, President of the Evangelical Lutheran Synod. In Amsterdam, only nine percent of the population is affiliated with a Christian church. He observed, nevertheless, that people with an “unreflected resistance to the one-dimensionality of life” come to Lutheran congregations. They appreciate the connection between body and spirit, intellect and faith experienced there. Wöhle suggested focusing on a third level in ecumenical conversations: talking with “unchurched” people.

Lutheran congregations in Switzerland are distinguished from others primarily by their liturgy, said the President of the Federation of Evangelical-Lutheran Churches in Switzerland and in the Principality of Liechtenstein, Renate Dienst. Therefore, sung liturgical and other musical elements play a special role here.

Following the consultation, participants celebrated the 75th anniversary of the German National Committee of the LWF (GNC/LWF) at the historic Wartburg Castle. It was here that Martin Luther translated the New Testament into German.

“This year’s Church Leadership Consultation of the Central and Western Europe Region, combined with the celebration of the 75th anniversary of the GNC/LWF, was an indispensable space to exchange experiences in the region, considering the broader, regional and global context. This is especially important during the preparation for the next LWF Assembly,” said the LWF Regional Secretary for Europe, Ireneusz Lukas.

Ethiopian church empowers communities to thrive on their own
news
ttttt

Ethiopia: Creativity in the face of hardship
news
ttt