Ethiopia: Stories of flight and loss from Tigray 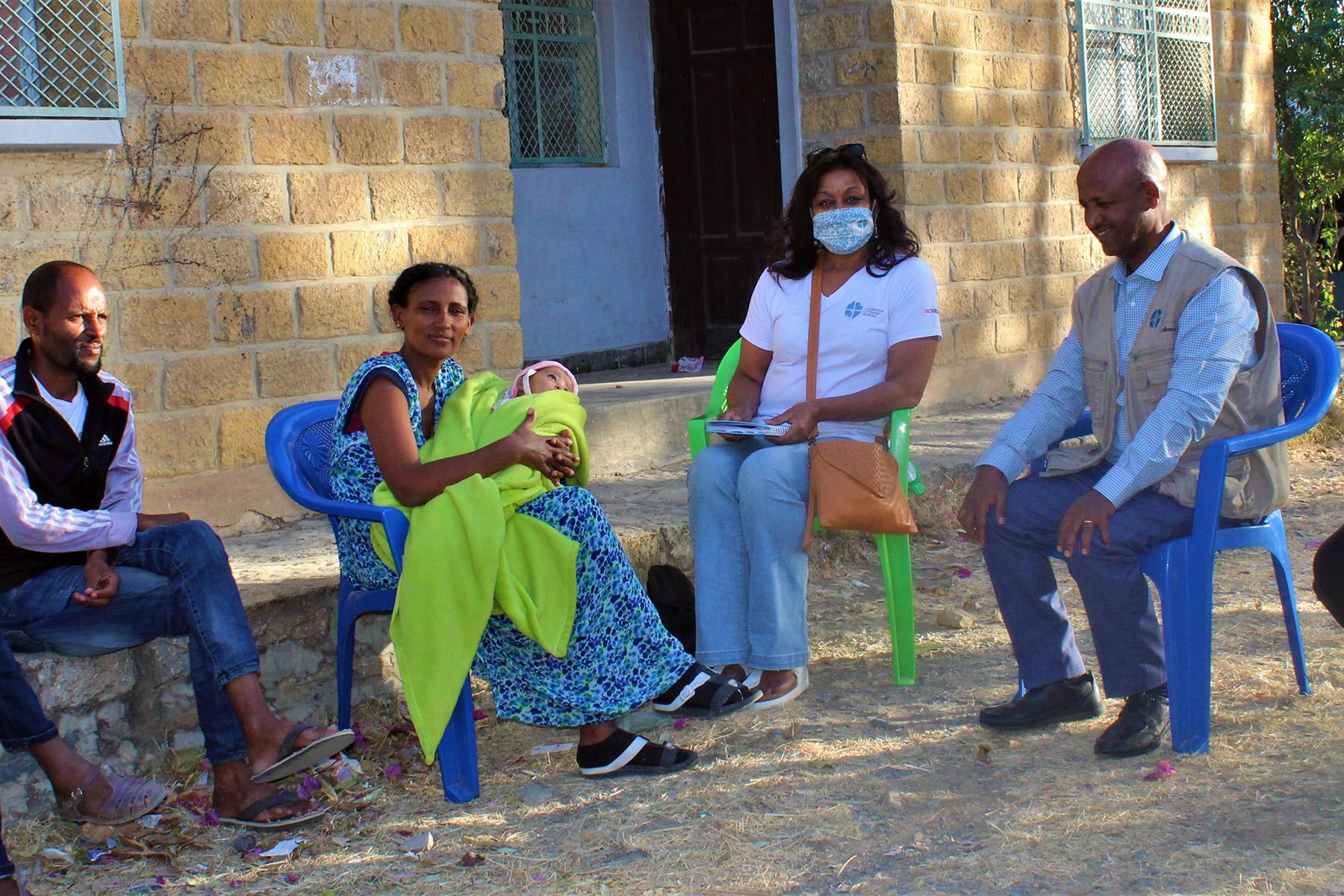 (LWI) - From everyday life into chaos: For the people affected by the recent conflict in Ethiopia, life as they knew it ended abruptly with the military offensive in the Tigray region. Even before, many had felt tensions between different factions.

The Lutheran World Federation (LWF) through its humanitarian arm LWF World Service, has been present in Ethiopia for 50 years. Its member church, the Ethiopian Evangelical Church Mekane Yesus (EECMY), also has a diaconal agency, the Development and Social Services Commission (DASSC), which is working with LWF World Service in supporting people in need.

Together, they assessed the needs of the internally displaced people (IDP) in Tigray in order to better support them. They met people affected by the conflict. Below, LWF Ethiopia country representative Sophia Gebreyes, shares the stories of four families.

After long delays due to lack of humanitarian access, LWF World Service and EECMY-DASSC started their response in Southern Tigray and Mekelle in early February. LWF will provide water and sanitation (WASH), and other relief items, as well as livelihood support, protection, and peacebuilding services. They will work through the local infrastructure of EECMY-DASSC. 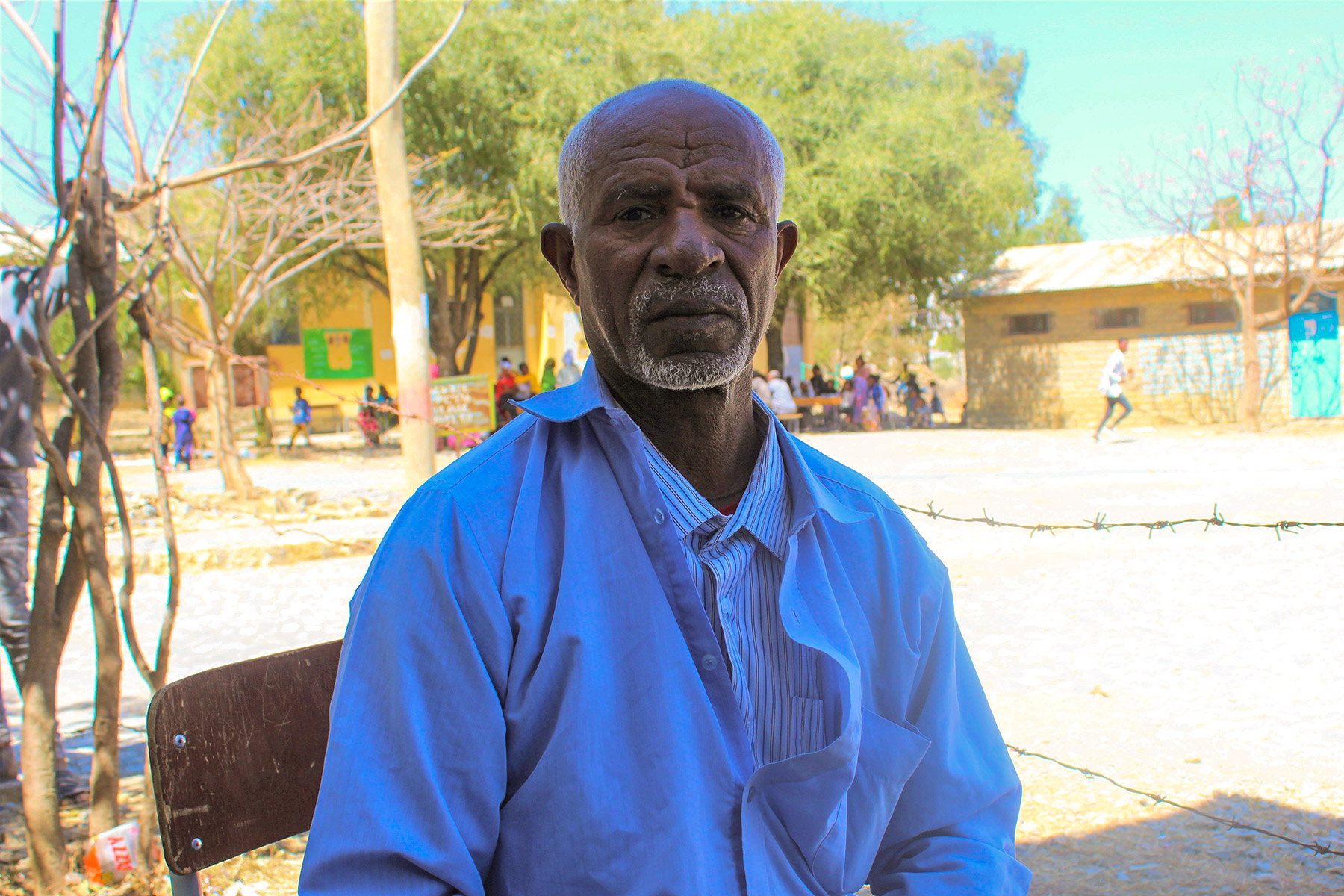 Amanuel Yemane*, 66, was born in in Hayk Mehsel. Following the famine in the mid 80s, he was forcibly resettled in the mid-eighties to Humera where he became a farmer.

After years of working on the fields, he bought land in Tirkani where he began to grow sesame and sorghum. He made good money as Humera sesame seeds are renowned worldwide for making tahini. Hadish was able to provide well for his seven children.

The Tigray conflict broke out in the middle of harvest time. Yemane had already harvested his sesame, but the traders in town refused to buy it and told him to leave instead. The sorghum, which was still in his field, was looted by militia. Yemane believes he was targeted because of his ethnicity.

Yemane lost a good harvest because of the conflict, which would have earned him more than a yearly farmer’s income. He also lost several oxen, 25 goats and his home. All the money the family owned had been invested on the fields and in the stables.

The war separated his family. Three of his older children were living in Mai Kadra, where militia committed a massacre on 12 November. They managed to flee to Sudan before it happened. 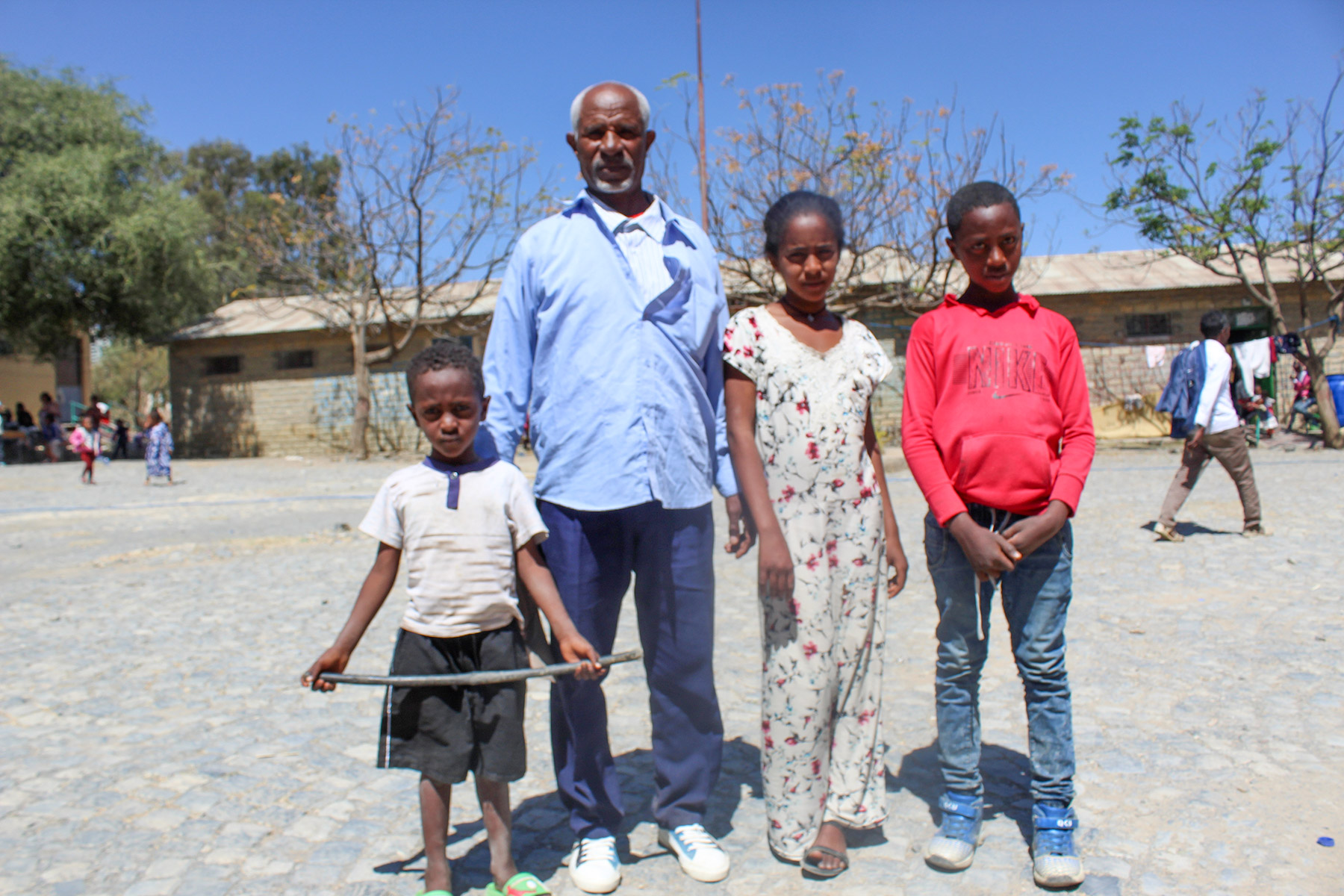 Yemane and his four younger children walked 560 kilometers to the provincial capital Mekelle. The journey took 18 days. They now live in the Hawultie School in Mekelle, an IDP site for people from Western Tigray. Here they depend on the generosity of the local people, who share what little they have. For weeks, humanitarian organizations were not allowed to enter the Tigray region. The refugees have received very little humanitarian assistance.

Yemane wonders what will happen to the displaced people who have been housed in eight schools in and around Mekelle, when those school open again for regular classes. The schools have been closed because of COVID-19, but were scheduled to open again in February. Nobody knows of arrangements, and the IDPs fear that they will have to leave again, adding anxiety to an already traumatic situation. 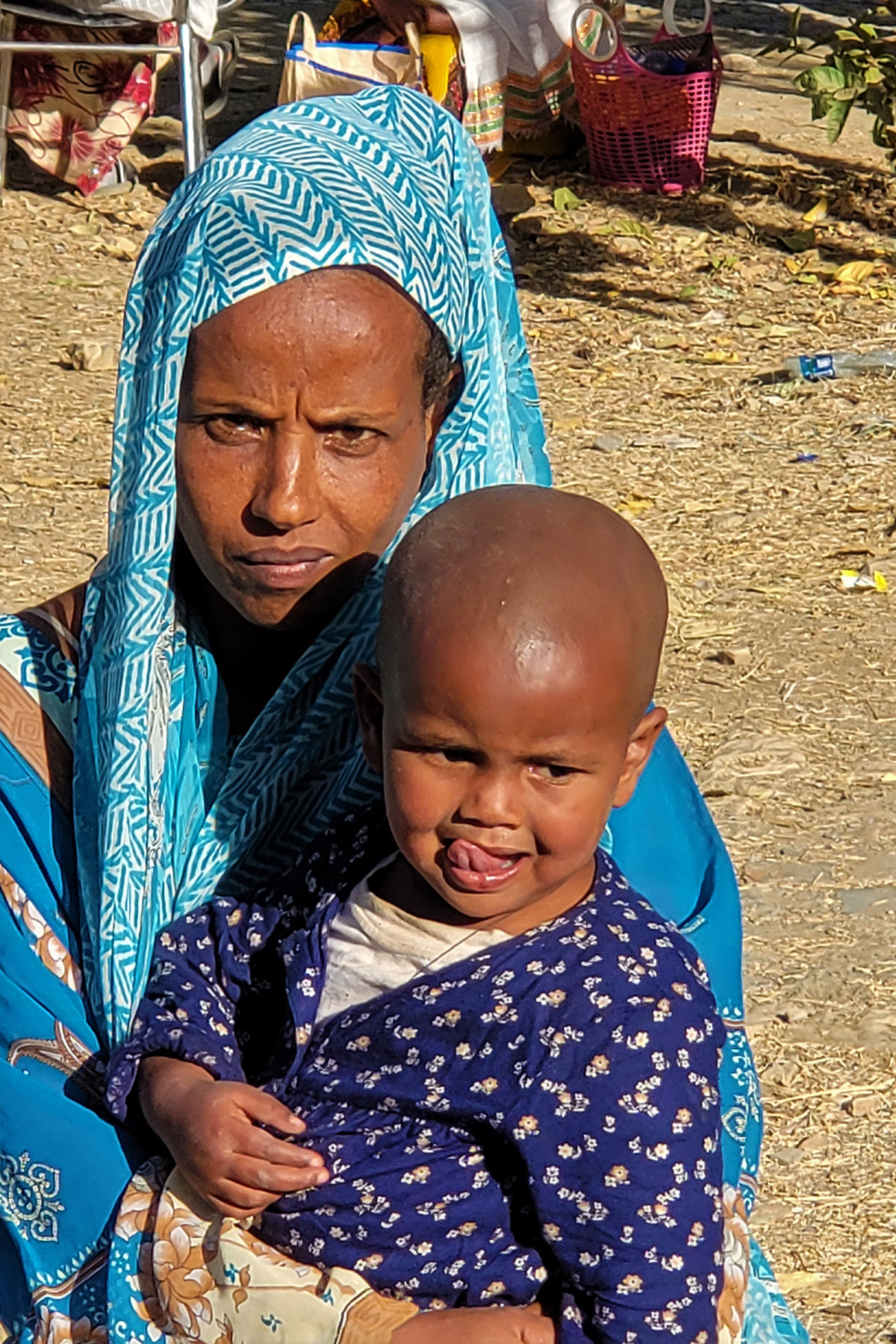 Saron Abraha*, 30, fled from Axum, the cradle of Ethiopian Orthodox Christianity, and revered as the holiest site in Ethiopia. She and her husband Kiflom* have five children and the sixth is on the way. They fled Axum when they heard the first explosions two and a half months ago. Since then, they have been living at a refugee center which was set up in the Ethio-China Friendship School, Mekelle. The center is overcrowded, and lacks basic sanitation facilities and services.

Abraha fled from Axum, carrying her two-year old toddler on her back. Her husband carried the five-year-old. The remaining children, aged 7, 13 and 17, had to walk the 225 km journey on foot. Saron said the trek was difficult and there was no food and water to be had along the way. Sometimes they would come across soldiers who would take pity on them and share their rations with the children.

I don’t even know where they are, if they are dead or alive, and if our house is still standing. We have absolutely no news.

Abraha’s family lived with her mother and brother in-law in Axum, but was separated from them. “I don’t even know where they are, if they are dead or alive, or if our house is still standing. We have absolutely no news,” Abraha said: “We were lucky that we fled in the early days of the conflict. I thank God that we did not see bodies on the highway and witness heavy fighting.” 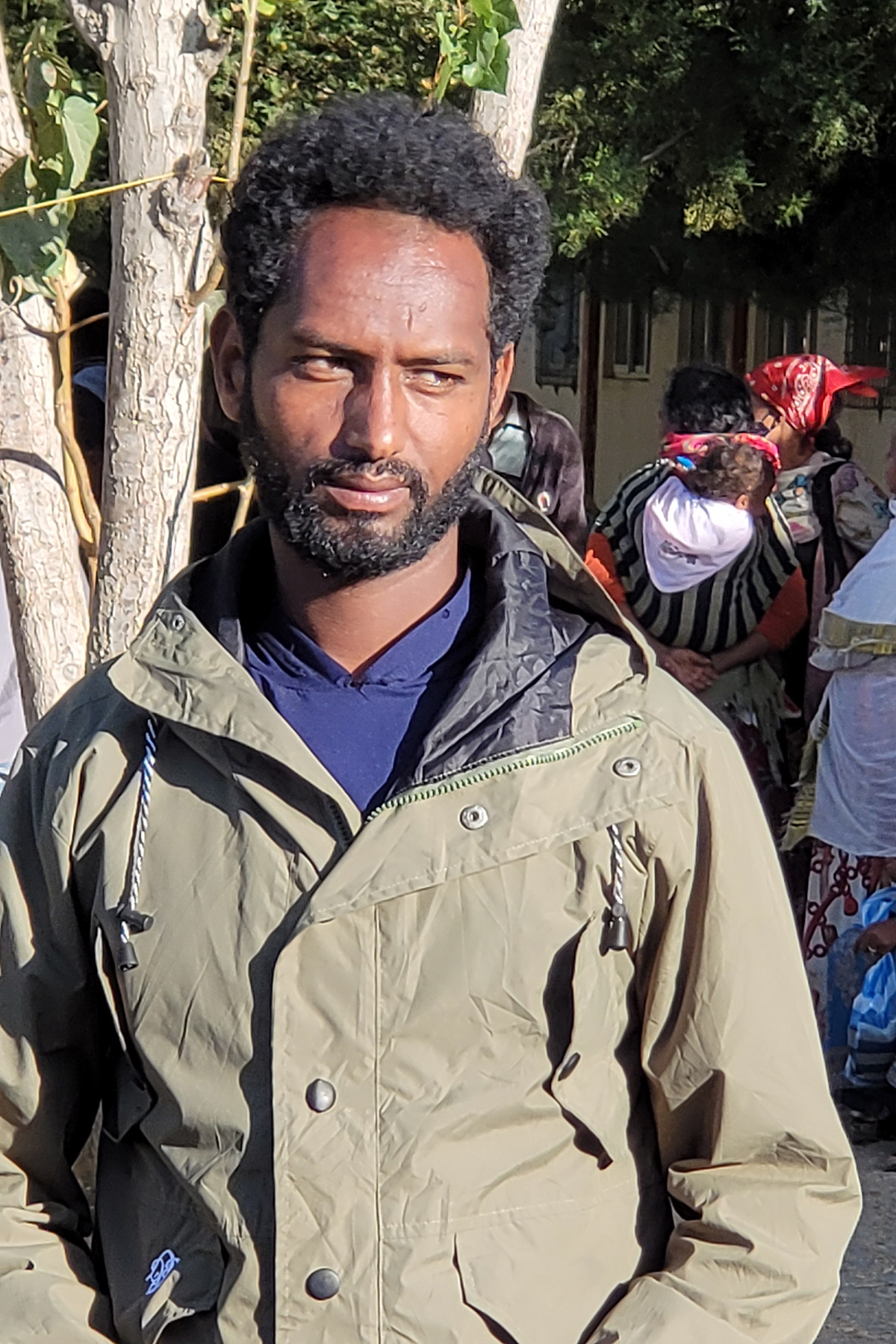 Gebre Michael Seyoum* 28, is a newly-married man. He lived with his wife Asqual Tewolde, 24, his younger brother and his parents in Endaga Arbi, near Adwa, a town with an old and proud history. He has a Bachelor’s degree in Sports Science but worked as a truck driver as there were no other jobs in his town.

When the war broke out, his elderly parents could not flee with him, so he made the difficult decision to seek safety with his wife and his younger brother. During the chaos, he was separated from his wife and his brother. Recently he received the news that his brother was shot but still has no news whether he survived his injuries. He also has no news about his wife’s whereabouts and whether or not his parents are safe.

Seyoum was visibly distressed when he recounted their ordeal. He recalled that he left Adwa in a group of 20 people. Only eight of them made it to Mekelle. They trekked for four days, sleeping in trees, hiding from wild animals and armed groups. On his way to Mekelle, Siye saw many dead people.

Once in Mekelle, they were received in the Kesanet School collective center. When the center became crowded, he was moved to Ethio-China Friendship School, where the government had set up a center for people displaced from Central Tigray.

Seyoum arrived in the school about two and a half months ago. The refugee accommodation in the school is well organized, but there are immense gaps: lack of mattresses, beddings, linens, water and relief goods. There is not enough space. More than 1,606 IDPs live in eight rooms, sharing four wash basins. More people arrive every day.

Refugees for a second time 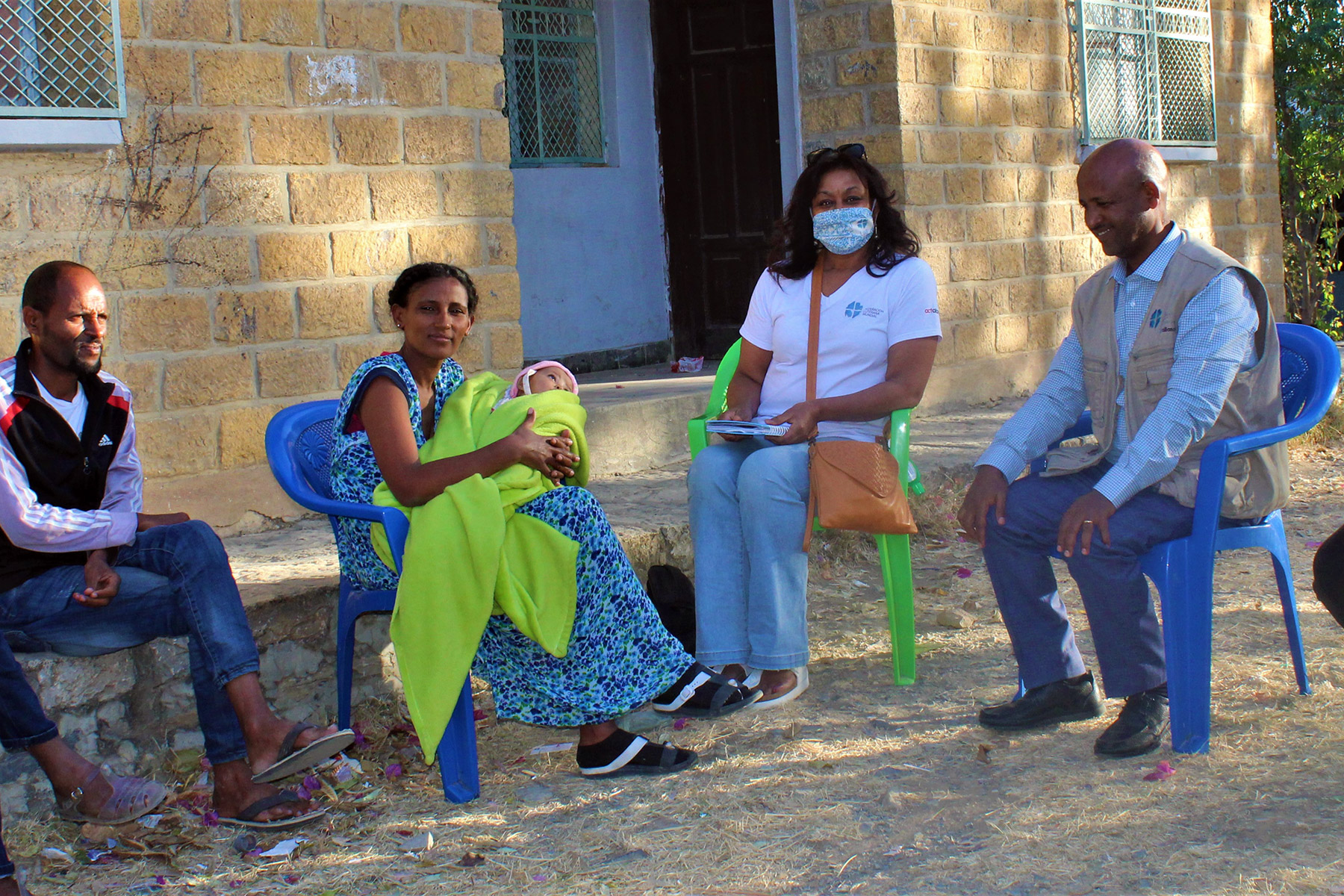 Kidusan Tekle*, 32 and her husband Mebratu Haile* left Eritrea to seek asylum in Ethiopia six years ago. Since their arrival they have been living in Hitsas Refugee Camp where their children Surab 5, Berhane, 5, and Mariam 3 months old were born.

During the Tigray conflict, the refugee camps in Hitsas and Shimelba were shot at with grenades. Those who did not die, fled the camps, becoming refugees for a second time. The continuous shelling, seeing dead bodies and losing 12 of their friends is a trauma that they still live with today.

After escaping from the camp, they first went to the UNHCR office in Shire where they had to sleep on the ground, in the open with no support whatsoever. The family decided to continue to Mekelle on foot, some 245 km. On arrival in Mekelle they were welcomed by EECMY-DASSC, which has been hosting the family in a church until now.

The family has neither been registered with UNHCR nor the Ethiopian refugee administration ARRA, and they depend entirely on the support they receive from the church. Kidusan said that they are so traumatized by what they saw and lived through that they do not want to return to a refugee camp as some refugees have. If they can they would like to continue and live in Addis Ababa.

The church had taken in a total of 11 Eritrean refugee families and 19 people without family, but all have left apart from the Kidusans family. Some went on to make a life in Addis Ababa, others relocated to the Mai Aïyni refugee camp, and some have disappeared. The refugees have no reliable sources for news. Kidusan estimates that thousands fled the camps when the conflict started.

LWF has started to provide WASH and other relief items, as well as livelihood support, protection, and peacebuilding services. Part of the LWF response is coordinated through the ACT Alliance Ethiopia Forum, in strong partnership with other faith-based and ecumenical partners.

Together, all partners aim to support over 250,000 people affected by the conflict in Tigray and the surrounding provinces of Amhara, Afar, and Konso. The response will last for a year.

*All Names have been changed to protect the people concerned

Please support our work and donate!

More about our work in Ethiopia

The LWF response in Tigray is possible through the support of ACT Church of Sweden/SIDA, Australian Lutheran World Service and ECHO/ERM. LWF plans to provide food or cash cards for food, relief goods, psychosocial support, protection, water and sanitation