Oromia, Ethiopia, is one of the provinces most suffering from recent droughts. LWF supports local farmers with special teff seed, that is drought-resistant and yields a bigger harvest than the traditional variety. 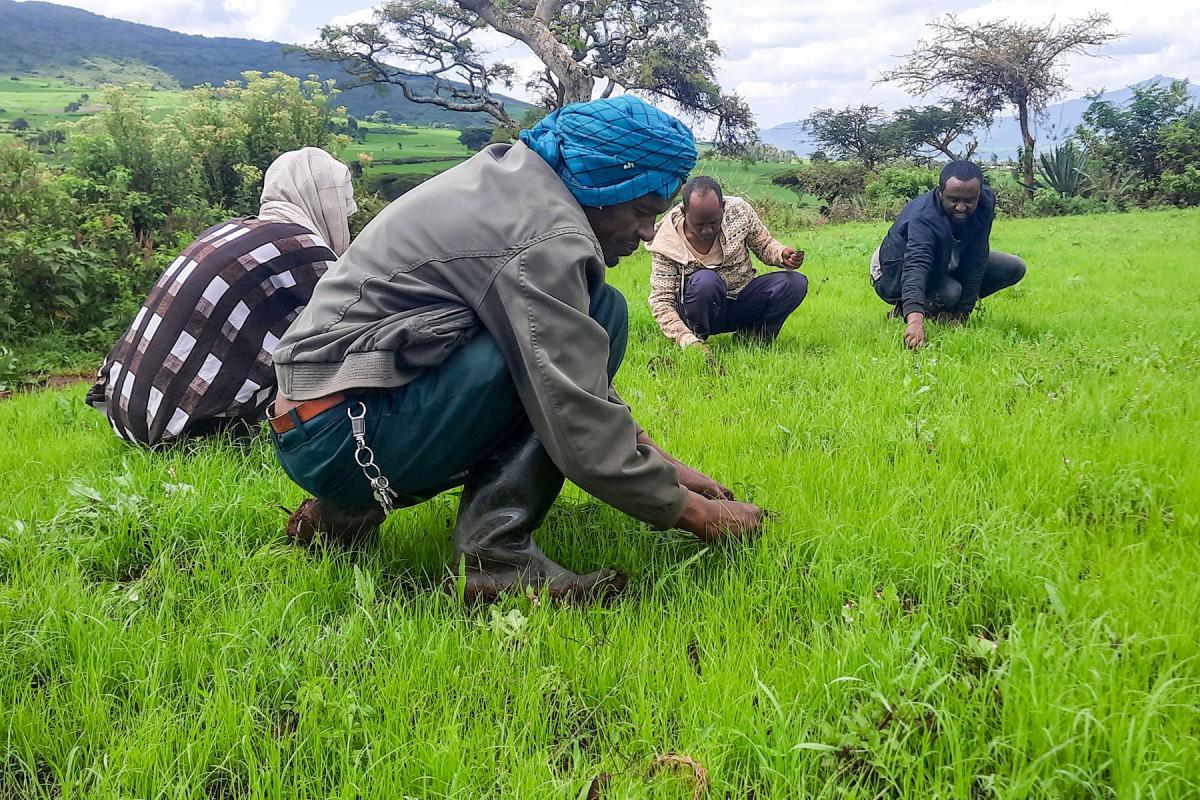 (LWI) - Drought-resistant seeds are one way to support communities affected by climate change. The Lutheran World Federation (LWF) has given improved teff seed to farmers in Bale Zone, Oromia – one of the Ethiopian regions most suffering from drought.

In Ahmed Abdule's life, climate change is already very visible. The 42-year-old farmer had learned to time sowing and harvest according to the annual rains that could reliably be expected in spring and fall. But for years the rains have come late, with much less water than expected. In the past five years, they stopped altogether which has resulted in fewer crops and not enough food to feed his family of eight.

"We can equip communities to adapt" to climate change

"For most people in the Global South, climate change is already here. We cannot stop it, but we can equip communities to adapt to it," says Sophie Gebreyes, LWF Country Representative in Ethiopia. She has been speaking about the hunger crisis in her country worldwide. Still, until the rains return, people need urgent help. After five consecutive years of drought, they have no reserves to fall back on.

For most people in the Global South, climate change is already here. We cannot stop it, but we can equip communities to adapt to it

LWF in Ethiopia set up a Climate Change Resilience Project in Gololcha District. 680 farmers in five towns (kebeles) received an improved variety of "teff" seeds. The grain is native to the Horn of Africa and is used to make the traditional injera bread in Ethiopia. The variety LWF gave to the farmers is drought resistant and has a higher yield than the teff which Abdule used to farm with. It is too early yet to talk about the harvest, Abdule says, but to him, the difference is already visible. "What I noticed at this point is that it already grows very well", he says.

316 hectares of land were sown with the new variety. The farmers also benefitted from training on climate-smart agronomic practices aimed at improving their methods of land preparation and better weed control without using chemicals.

The project aims to contribute to sustainable livelihood and resilience of the communities. It will directly benefit about 3,800 families with 11,519 people, among them almost 400 people already displaced by climate change.

Abdule expects to earn 3.5 quintals from 0.3 hectares by using the improved variety of seeds - about 75% more than before. He also said teff has high demand in the local market because it is made into injera (a fermented pancake flatbread), a staple diet for many people in the country. "I hope I will also get a good income for my family because, the price is high compared to other food items.", he says. "My plan in the future is to save some of the seeds for planting during the coming rainy seasons."

As delegates from all over the world gather in Sharm El-Sheikh for COP 27 in Egypt, LWF Ethiopia Country Representative Gebreyes highlights the urgency to support communities affected by climate change. "East Bale Zone is one of the zones most affected by drought in the Oromia region. We see high numbers of failed harvests and death of livestock," she says. "The drought only adds to the hardship resulting from high inflation, the impact of conflict, and the desert locust infestation."

Peacebuilding from the grassroots
news