Estonia: The church, a treasure for future generations

In this Voices from the Communion, LWF Vice President Archbishop Urmas Viilma reflects on his childhood in Soviet-occupied Estonia, his discovery of the Christian faith and his journey to become the youngest church leader in the region. 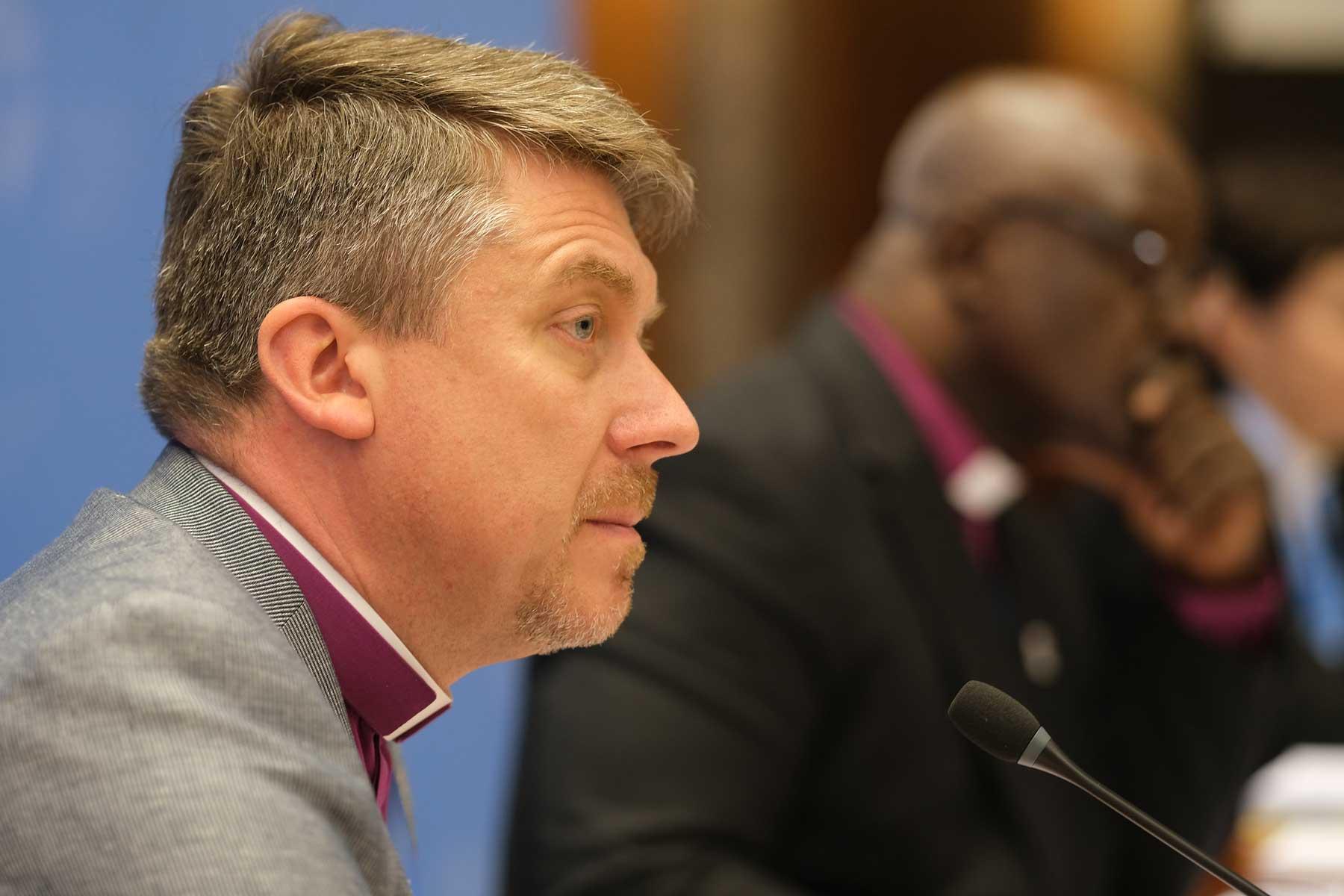 Voices from the Communion: LWF Vice-President Urmas Viilma on his early years and the region today

(LWI) - In the summer of 1991, when Estonia declared its independence from the Soviet Union, Urmas Viilma was an enthusiastic 17-year-old student, fresh out of high school and planning to start studying for the priesthood at the Institute of Theology in Tallinn. Sitting alone on a bus taking him through the empty streets of the capital on the way to sit his entrance exams, he had a sudden, striking realization that both he and his homeland were now free to determine their own futures.

“Facing a new stage in my life,” he wrote on the 30th anniversary of Estonian independence, “I realized with unexpected clarity that God had handed our people a treasure which we have to use tenderly and with care.”

In the three decades since the ‘Singing Revolution,’ the popular uprising that led to the end of Soviet occupation in Estonia, Viilma has sought to nurture the newly independent church and to hand on that treasure to the next generations. He has gone on to become the youngest deacon, pastor, bishop and archbishop in the Estonian Evangelical Lutheran Church (EELC). In 2017, he was elected as Vice-President for Central Eastern European region of the Lutheran World Federation (LWF).

Can you share some memories of your childhood growing up in that Soviet era?

My childhood and that of my two brothers was in a typical, small Soviet industrial city near Tallinn where there were no church buildings. My parents had been baptized but they were not active church members, so we were not brought up in a Christian family. We celebrated Christmas and Easter, taking part in the traditional egg painting as gifts for our neighbors, but without any knowledge of the Christian background.

I discovered for the first time the existence of this parallel universe in which people go to worship and talk about God and work for the church.

After the mid-1980s, when [Mikhail] Gorbachev was elected as General Secretary of the Soviet Communist party and introduced his policies of perestroika and glasnost, the church started to be recognized again and people began baptizing their children. I discovered the church through my school because the headmaster invited a village pastor to come and talk about Christian culture. I discovered for the first time the existence of this parallel universe in which people go to worship and talk about God and work for the church. I was 16, but did not know any of this and was not sure if I believed or not, because I had never asked myself any of these existential questions.

How did your parents react when you told them you wanted to become a priest?

To be fair, I would say that my parents gave us somehow a good ‘Christian’ education, yet without any mention of God. They lived in a small town where everyone knew them and my father especially worried about how my decision would be seen by the local community. He worked as a technician in a factory and expected at least one of his sons to take over his technical practice. For two summer vacations, I did work in the factory but when I told him I planned to study theology, he went down to his workshop in the cellar and stayed there for a long time, smoking but not speaking to anyone.

My mother worked as a bookkeeper. After a while, my parents understood that being a parish priest was an honorable profession. They saw how positively people reacted and realized that it is not such a disaster to have a son who is studying theology!

During the Soviet occupation many priests fled into exile or were sent to Siberia, but you were part of a new generation of young pastors being ordained?

Yes, up until independence it was still possible for people to study at the Institute of Theology but it was not recognized anywhere in the Soviet Union, so many had studied at other institutions and often had other jobs before coming to study theology. It was a fresh new start for the church to have very young students like me coming straight out of twelfth grade to be trained for the priesthood.

Many were also like me with no Christian background, which was problematic in some ways, but also opened the church up to society in new ways. Those who had grown up as Christians within the atheist system, they were inside a bubble, like a Christian ghetto, and did not trust people outside the church or speak openly about their faith.

I was 16 when I was confirmed and just 19 when I was ordained as a deacon, the youngest minister in the Estonian Evangelical Lutheran church. But now, 30 years on, we are again in a situation where students rarely come from high school to study theology and are much more likely to be older. It is strange sometimes to be interviewing candidates for the priesthood who are a lot older than I am! This will be a big challenge for the church when my generation reaches retirement age.

As church leader, you have focused a lot on revitalizing religious education through church-run schools, haven’t you?

Yes, and I myself still teach three religion classes a week to students from 13 to 15 years old. There is no religious education in our public schools so all the churches have worked hard to establish schools where they can teach basic knowledge about the Bible, about our faith and our ecumenical relations with other Christians.

30 years ago, it was a popular choice for parents to send their children to Sunday School but now there are so many other activities competing for their children’s attention at the weekends. But if they have no knowledge or understanding of the church, where will the next generation of believers come from?

Do you see this as the biggest challenge facing your church today?

Yes, but the Holy Spirit is still working in the church, and we are seeing very committed candidates coming to study at our institutes. Being a pastor is not like any other profession and is quite complicated. After three years studying for a bachelor’s degree, two years for a master’s and an extra year of pastoral training, you have a good education that is recognized anywhere in the world.

But you also know that, as a pastor, you may be earning less money than someone on a state pension. We demand high standards, but we cannot afford to pay much so the call from the Holy Spirit must be very strong. In this sense, again, we are similar to the Soviet times, as people often have other professions and have raised families but then feel strongly motivated to answer the call that they may have felt many years before.

As LWF Vice-President, you represent the Central Eastern European region. What are key issues facing the region?

It is challenging in many ways, even before the start of the war in Ukraine. There is no common language in our region: using Russian or German is seen as the language of the former rulers, so English is more neutral, but it is not from our region and not a common language for the older generations. All the churches in our region are a minority: Estonia is maybe an exception as the majority Christian church, but we are still a minority in society as only a third of Estonians are Christians today.

We also have complex relations between the churches in our region, with three Lutheran churches in Russian territory, two of which belong to the LWF, with one of them being member of the International Lutheran Council. Some of our churches ordain women while some don’t and most hold quite conservative views on sensitive topics such as human sexuality. Even before the war, it was not so easy for me to travel to visit all the churches, especially in former Soviet states like Kazakhstan, Kyrgyzstan or Georgia. What is more, the Central Eastern European region of the LWF is in my opinion culturally and historically the most multi-faceted region in Europe which adds to complexity.

Now, with the war inside our region, it is often difficult for people to communicate with each other. I do not try to unify everyone on these complex questions, but I see the most important task as continuing to be a bridge and to keep the conversations open. The other European regions can meet regularly, but for us it is very complicated, so we try to stay in contact and not to blame each other.

Finally, how do you try and encourage your people to feel more closely connected to the LWF and to the global communion of churches?

This is an issue, not just for our region, but in other places where I hear the same questions asked. I think that one of the pillars of the LWF has always been its diaconal work, especially with refugees and this is now one of the central issues facing us in our region. During the previous Syrian crisis, when people asked me why they should care about the refugees, I reminded them that the LWF started in 1947 following the huge refugee crisis of World War II. At that time 70,000 Estonians escaped from their occupied country and were waiting in camps as the LWF began negotiating with states to help with their resettling to Australia, the U.S., Canada or Europe.

We know that, as a tiny church, we do not have the finances or resources to do much on our own, even though we have never raised as much money as we are now giving for Ukraine. But it is good to know that you are part of a bigger process. Similarly with ecumenical relations: before the war, we had practical bilateral negotiations with the Russian Orthodox Church about the need for our pastors to work with our communities in Moscow, St Petersburg or Siberia. But we do not have the capacity to conduct dialogues with many of the other Christian churches, so it is good to know that we are represented at a global level through the LWF for this important work too.

USA: “We are connected to a larger, growing Lutheran family”
news