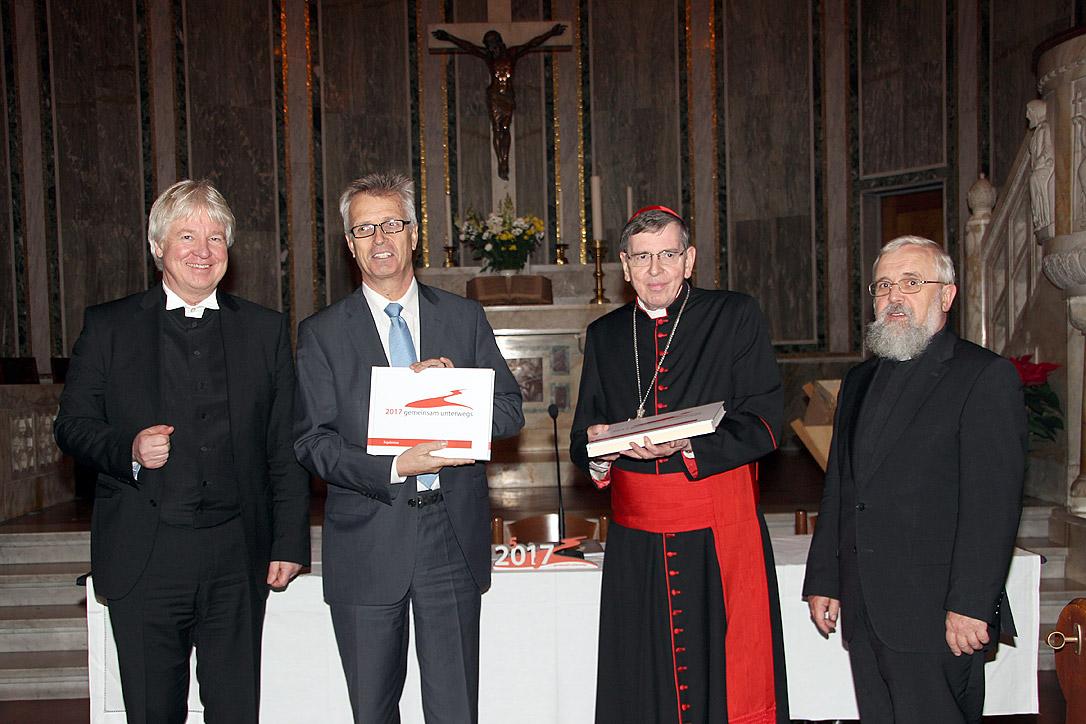 LWF and the Vatican Announce Common Liturgical Material for 2017

Speaking during a panel discussion, held 18 December, in the Lutheran church in Rome, Junge emphasized that the relationship between Lutherans and Catholics was being transformed “from conflict to communion.” Precisely in a world “in which religion and faith are regularly portrayed and perceived as trouble makers,” he said it was a phenomenal testimony that the Lutheran and Roman Catholic churches continued to move “towards a profound communion that frees us to serve God and the world.”

Alongside Junge on the panel were, the president of the Pontifical Council for Promoting Christian Unity (PCPCU) Kurt Cardinal Koch, the Catholica representative of the United Evangelical Lutheran Church of Germany Bishop Karl-Hinrich Manzke, and the chairperson of the Ecumenism Commission of the German Episcopal Conference Bishop Gerhard Feige.

Junge and Koch took the opportunity to announce plans for a common liturgical guide in connection with the 500th anniversary of the Reformation in 2017, of which publication is scheduled for 2015. Looking towards 2017, the Lutheran - Roman Catholic material is intended to enable churches all over the world to review the 500 years of Reformation. The guide will follow on from the dialogue document From Conflict to Communion published by both partners in 2013, and transpose it into liturgical acts. The material will reflect the structure of this document with its triple form of penitence for the wounds mutually inflicted; joy at the insights and dimensions of the Reformation; and hope for unity.

The panel also discussed the question of what exactly was to be commemorated in 2017. “Not church division, nor the 500th anniversary of a church and certainly not any heroic actions,” Feige was clear about that. “But what then? Placing Christ in the middle of the celebrations around 2017 and in this way celebrating a festival of Christ would build a bridge for both partners.” In his experience, this had worked well in 2012 at the Pilgrimage of the Holy Robe in Trier. However, the concept still needed to be filled with more tangible content, the Catholic bishop admitted.

The panelists agreed on the question of a joint act of repentance between Lutherans and Catholics. “I think it would be a fine thing if such a symbolic act could take place between Catholics and Lutherans,” said Koch. However, it would not be about unilateral mistakes or demands for penitence. “The Catholic side is not telling the Lutherans that they should repent,” underscored Feige. Both sides shared a burden of guilt, Koch and Feige agreed.

Junge affirmed the usefulness of repentance with reference to the experience of the LWF in dialogue with the Mennonite World Conference. “We were not getting anywhere because there were memories that were still too vivid.” The act of repentance during the LWF Assembly in 2010 in Stuttgart had cleared these obstacles out of the way. The idea also received support from Manzke as Lutheran representative for relations with the Roman Catholic Church in Germany. Despite all the need for penitence, he also urged those present not to forget the positive experiences and common ground, and that “our churches have the same mission: to bear clear witness in word and deed.”

The panel took place in the closing phase of the German internet project “2017 gemeinsam unterwegs (2017 – Together on the Way). In the ecumenical project the LWF German National Committee (GNC/LWF) and the Johann Adam Möhler Ecumenical Institute had jointly presented the dialogue document From Conflict to Communion in an interactive online forum. Just before the panel, Manzke and Feige presented the findings of the project to the PCPCU president and LWF general secretary, who received them on behalf of their respective World Christian Communions.