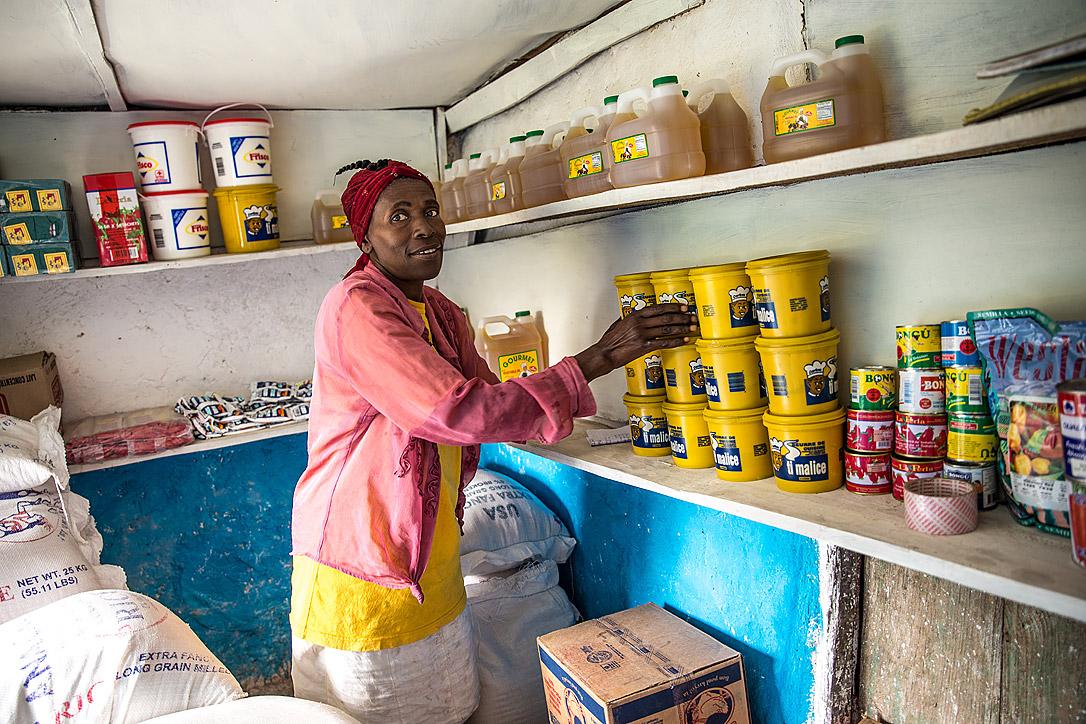 A woman in the community store in Despagne. Photo: LWF Haiti/H. Enge

(LWI) – Buckets of butter, canned tomatoes and corn, gallons of oil, garden seeds and big white sacks of grain: The community store in Despagne is well stocked. “This is the first time we manage such a large amount of goods and finances,” one of the leaders of the women’s group says. “The shop allows us to accumulate income. We could already use part of the profit to buy 16 sheep and distribute them to the most vulnerable members of this group.”

The shop is part of the Lutheran World Federation run project “Capacity building and improving the socio-economic situation of rural women in Haiti.” Financed by FinnChurch Aid the project aims to increase the influence, decision-making ability and socioeconomic status of women in their respective communities.

More than 320 women in Macaya have so far been benefitting from the initiatives of the project. Activities are including literacy classes in especially set-up “Alpha Centers”, consciousness-raising initiatives; training on women's leadership, human rights and citizen participation in community life.

Pay for Education and Textbooks

The community store is supported through trainings in accounting and trade, enabling the women to analyze the market, determine the best time for selling products and to eventually make their business profitable.

There is also a project with vulnerable women on goat farming. “During the school year in September 2014, I sold a goat that allowed me to pay school fees for my children, and to buy uniforms and shoes,” Latigot, a mother of seven, said.

For some of the initiatives it is yet too early to tell the results. Participants valued the human rights and citizenship trainings and plan to make their voice heard from now on. A 40-year-old mother of ten children emphasizes the importance of reproductive health education in the community, even if it does not apply to her anymore: At the age of 40 years she is already considered elderly in her context

The majority of the participants emphasize how much the literacy initiative has changed their lives. A young woman who had never been to school joined the third year of basic education after her training in the Alpha Center.

"I got married in June,” another woman says. “My husband did not know how to write. He could not sign the civil act, so I signed for me and for him. After that, he decided to come to the Alpha Center ".