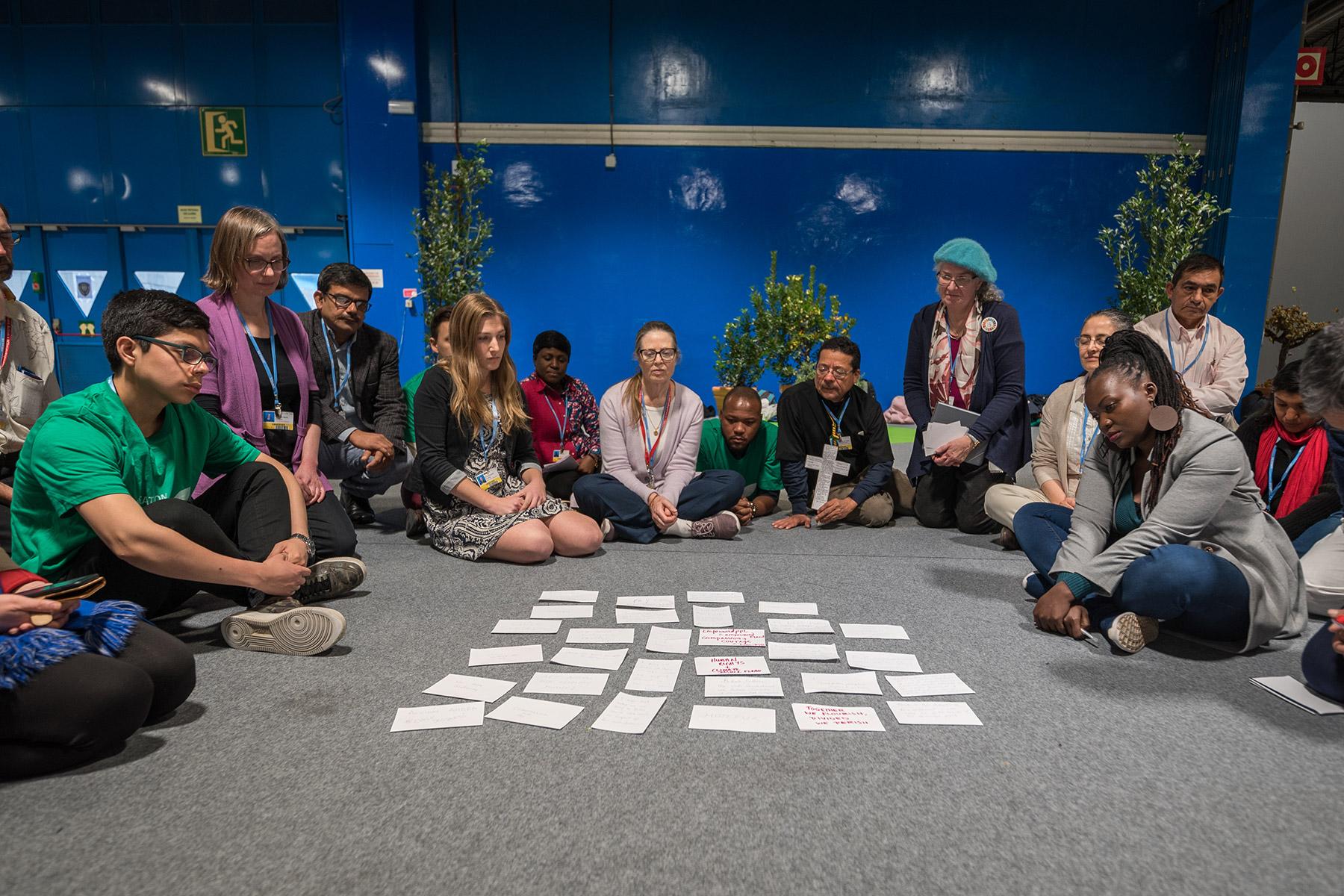 Faith-based organizations gather for a vigil, as COP25 is about to draw to a close, praying that negotiations will bear fruit, bringing about urgent and just action to find a way out of the climate crisis. Photo: LWF/Albin Hillert

(LWI) - The Week of Prayer for Christian Unity may have ended on 25 January, but the task of praying and working together to protect our planet continues to be a priority for all churches, every day of the year. This theme of practical ecumenical engagement in caring for our common home was at the heart of a webinar during the Week of Prayer to launch the upcoming Season of Creation, scheduled for September 2021.

The online discussion on 21 January was led by four ecotheologians, including the Lutheran World Federation (LWF) Program Executive for Identity, Communion and Formation, Rev. Dr Chad Rimmer. He stressed how COVID-19 has “unmasked the imbalances that exist in our relationships to one another and to the earth.” While viruses are part of our human nature, he said, problems arise “when the economy becomes the only measure of wellbeing and is not rooted in the earth’s capacity to sustain.” Rimmer described the liturgical Season of Creation as an expression of Christian unity that “puts us in touch with the visible unity we have as humans, as creatures”.

Reflecting on the theme for this year’s Week of Prayer, ‘Abide in me and you shall bear much fruit’, Dr Louk Andrianos, a World Council of Churches consultant on Care for Creation, Sustainability and Climate Justice, said this passage from St John’s Gospel emphasizes the need to understand ourselves as branches of the vine which is Christ. But the pandemic and the environmental crisis have taught us that if we are arrogant and take “more than we need for our daily bread from the earth,” he said, then the balance of creation is disrupted, causing negative consequences for all.

Dwelling as one human family

Speaking from a Catholic perspective, Father Joshtrom Kureethadam, Coordinator of the Ecology and Creation sector of the Vatican’s Dicastery for Promoting Integral Human Development, said Jesus’ instruction to ‘Abide in my love’ reminds us of “our vocation to dwell as one family in our common home.” He spoke of the joy of seeing how people work and witness together in difficult situations, but he also raised concerns about the unequal distribution of COVID-19 vaccines, asking: “If we are all living in a common home, how can we forget about those who are most in need?”

Mr Richard Murray, vice-chair of Eco-Congregation Scotland and a lay reader in the Scottish Episcopal Church, shared the journey of many different denominations in his county of Aberdeenshire to form the North-East Scotland Climate Action network. The aim, he said, is “to create a single coordinated voice” in raising urgent environmental issues with the government, regional authorities or big businesses.

Moderator Amy Echeverria, International Coordinator of Justice, Peace and Ecology for the Columban Missionaries, reflected on the importance of prayer in “the ongoing process of conversion” which leads from environmental awareness to commitment and practical action.

Part of the ecumenical movement is to embody the visible unity and incarnate the spiritual unity that is ours through One Word, One Faith, One Baptism.

Rev. Chad Rimmer highlighted the theme for the 2021 Season of Creation, which is based on a renewed understanding of the “Oikos of God” as a common home for all people. The ecumenical nature of this annual celebration, which runs from 1 September to 4 October, helps to “embody the visible unity and incarnate the spiritual unity that is ours through One Word, One Faith, One Baptism,” he said.

Noting how the pandemic has disrupted our ability to gather together to worship, Rimmer said the Week of Prayer for Christian Unity and the Season of Creation are “times to reconnect and root ourselves in a common vocation.” We can see “how unrooted we have become when our singing becomes a vector for disease and we are unable to share a hug or a handshake,” he added. “Standing in the shadow of the Cross,” he concluded, “we see grace breaking in, both in our ecumenical experiences” and in the harmony of the whole of God’s creation.