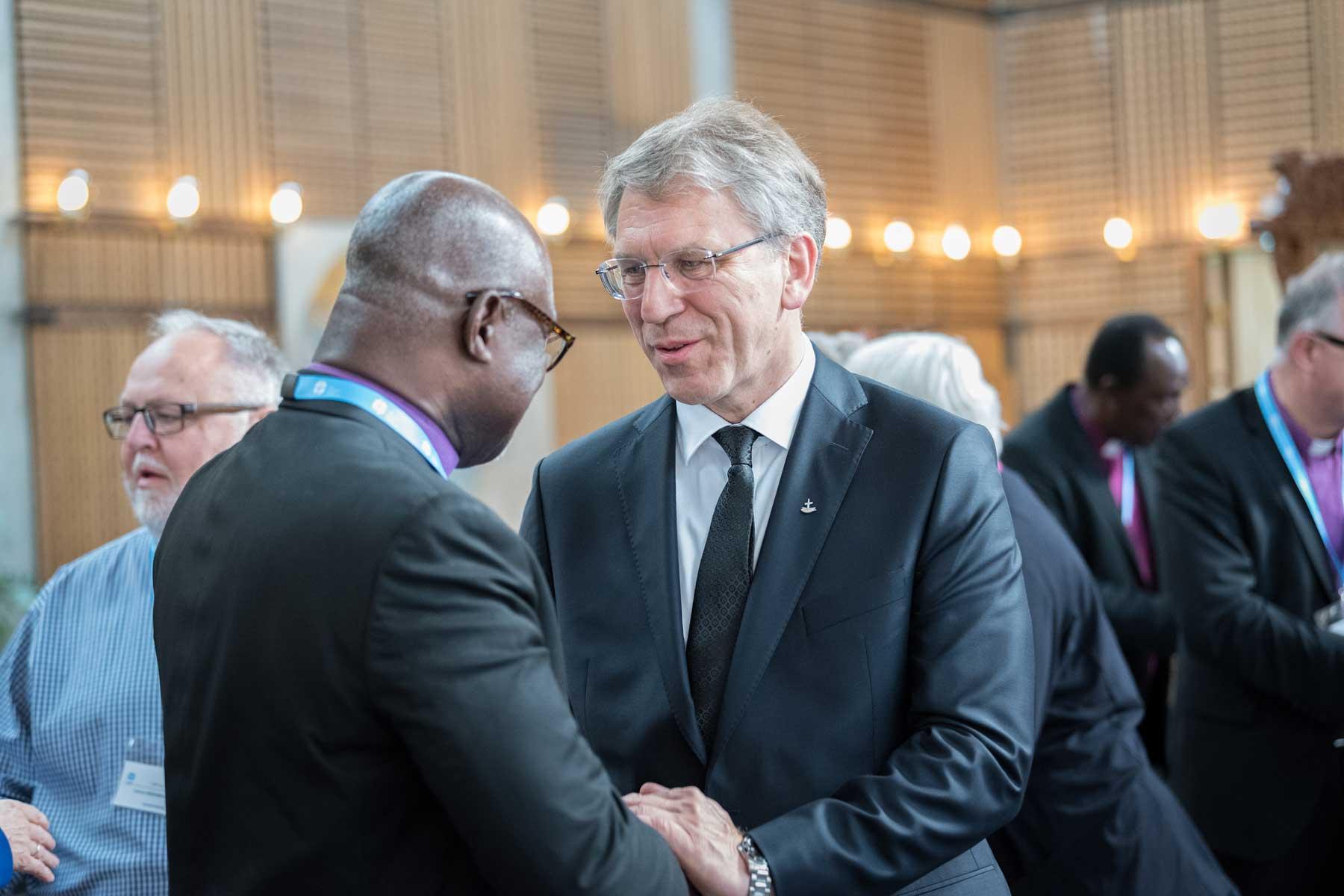 (LWI) - Lutheran World Federation ecumenical partners have praised the LWF for deep commitment to ecumenism in greetings to the LWF 2018 Council.

Rev. Dr Olav Fykse Tveit, General Secretary of the World Council of Churches (WCC), said that the one ecumenical movement was a reality, strongly affirmed, for example at Lund in 2016 and in the WCC central committee with the recent visit of Pope Francis to Geneva.

“The one ecumenical  movement is a gift to the churches - to be shared among us - and with the world, so that the world may believe in the love of God.” The life and contributions of the LWF were among the precious gifts to the movement, he said.

Msgr. Dr Matthias Türk, of the Pontifical Council for Promoting Christian Unity, looked back to the joint commemoration of the Reformation in Lund and Malmö, Sweden. “With great joy, we noted that the last 500 years, which saw a sometimes very painful history of separation, had turned into a new-found community in ecumenical dialogue in the last 50 years. Old prejudices had been overcome on both sides.”

Canon John Gibaut presented the greetings of the Anglican Communion on behalf of its General Secretary Most Revd Dr Josiah Idowu-Fearon. He said the Anglican Communion rejoiced with the LWF in the Reformation commemoration events of 2016-17. The LWF had transformed a pivotal event in the past into a springboard to the future in terms of the unity and mission of the church.

It was a joy for the Anglican Communion to be part of that commemoration through its affirmation of the Joint Declaration on the Doctrine of Justification (JDDJ). “We look forward in the coming years to exploring the implications of our common adherence to the JDDJ for our journey together in ever deepening communion and mission.”

On behalf of Rev. Dr Chris Ferguson, General Secretary of the World Communion of Reformed Churches (WCRC), Rev. Dr Hanns Lessing reflected on the ecumenical openness of LWF and WCRC. “It is remarkable that 500 years after the Reformation, two communions that used to be rather known for the fierce defense of their doctrinal integrity are now defining their theological identity with reference to ecumenical openness that… is being lived out in dialogue, in common witness through diaconal service and advocacy, through common prayer and in shared spiritual life.”

Rev. Dr. J. Nelson Kraybill, President of the Mennonite World Conference, expressed his gratitude for the trilateral conversations recently concluded between Lutherans, Mennonites and Catholics. “The global church needs each of these faith traditions as complementary expressions of the body of Christ. Thank you for your ecumenical vision that so graciously includes me and 1.4 million Anabaptists around the world.”

Dr Jean Daniel Plüss, of the Swiss Pentecostal Mission and the co-chair of the Lutheran-Pentecostal dialogue, also looked back to fruitful dialogue between LWF delegates and representatives of classical Pentecostal churches and looked ahead to further talks. “As we plan to meet again this October, we will be eager to deepen our theological understanding towards greater unity, to seek ways by which we can be witnesses of God’s good news with a common voice and we want to keep in mind that our dialogues also have a pastoral dimension so that we can respond to the challenges we face.”

In greetings from the Conference of European Churches (CEC), Ms Erin Green, said the existence of the LWF as a global family, one that subsumes and goes beyond Europe, is an essential reminder to CEC that Europe’s challenges and behavior do not end at its borders, however they may be defined. “Here, in relationship with the Lutheran World Federation and other global church communities, Europe is confronted with its responsibilities to the rest of this sacred world.”

Photos of the Council

The 2018 LWF Council meeting takes place in Geneva from 27 June - 2 July. The theme of the Council is “Freely you have received, freely give” (Matthew 10:8, NIV). The LWF Council meets yearly and is the highest authority of the LWF between assemblies. It consists of the President, the Chairperson of the Finance Committee, and 48 members from LWF member churches in seven regions.

The LWF Strategy in Bahasa Indonesia and Swahili
news