The dangerous dream of a brighter future 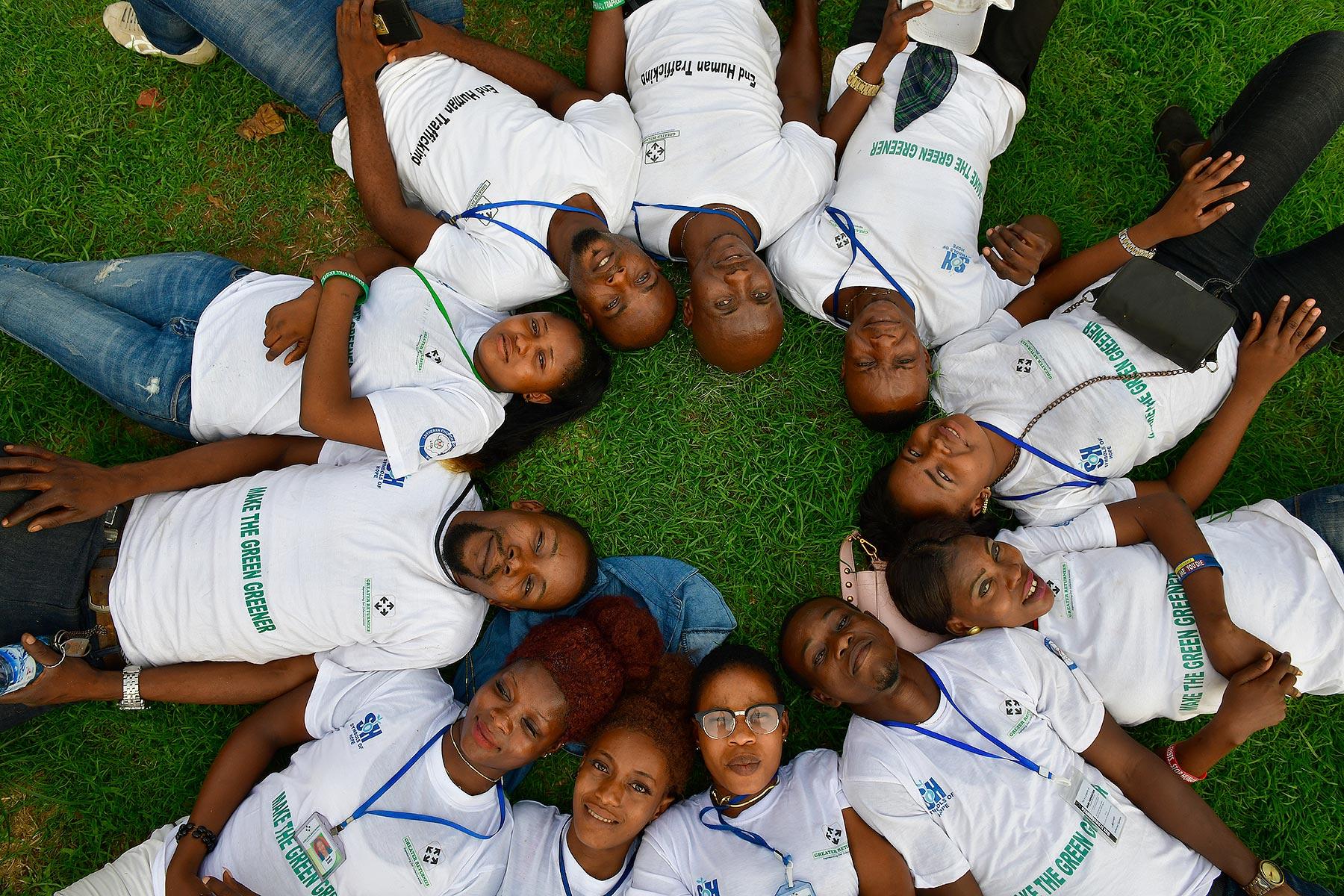 Symbols of Hope: LWF program in Nigeria warns of the risks of migration

(LWI) - Nosa Okundia and Happiness Ehimen almost lost their lives on the journey from their native Nigeria to Europe. Today they are back home again with one goal in mind: to stop others from falling prey to traffickers and attempting the same traumatic trip.

The Lutheran World Federation (LWF), through its Symbols of Hope program, supports their efforts to raise awareness of the dangers posed by powerful and well-funded trafficking networks and to help those who, for different reasons, have returned home. 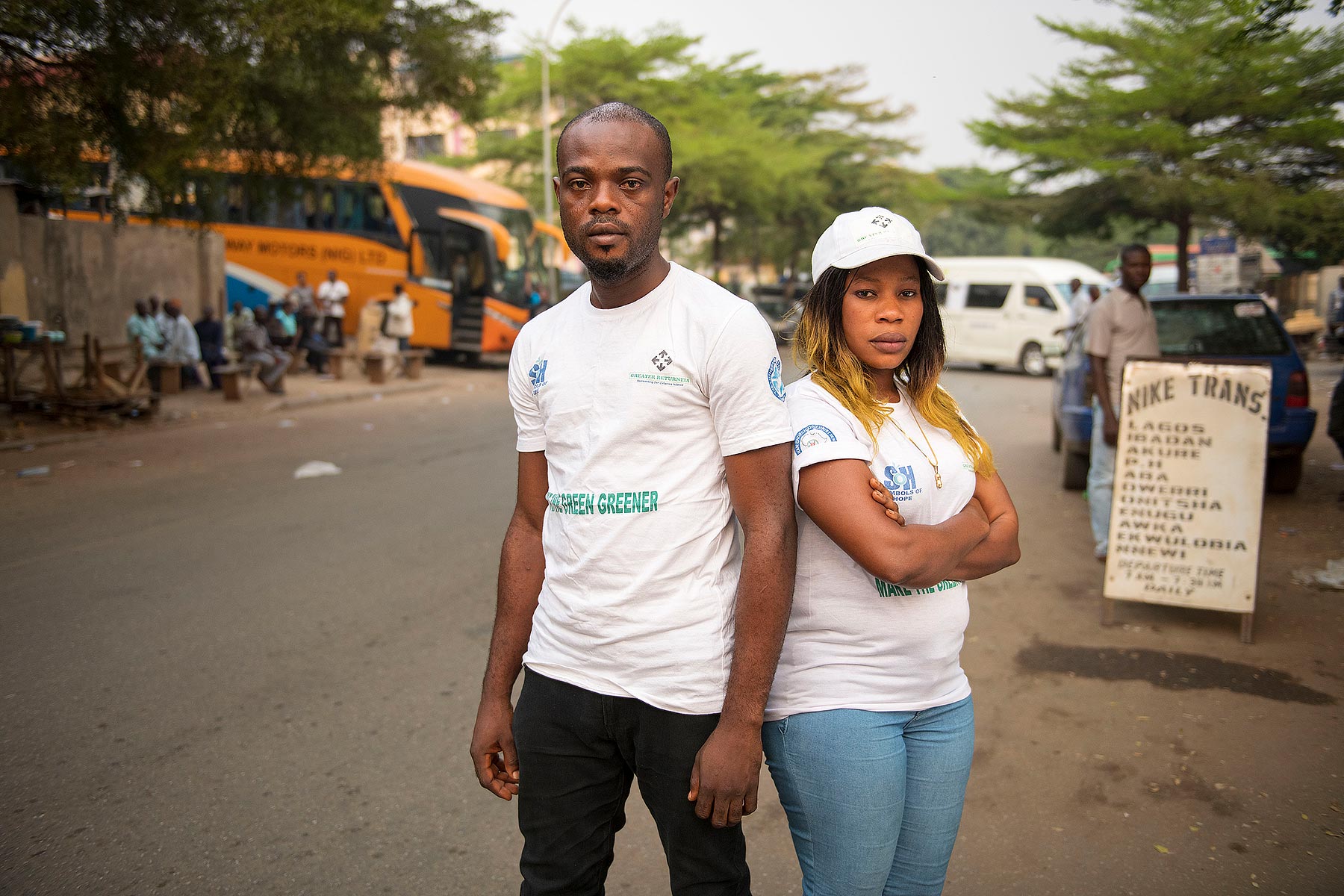 Nosa Okundia and Happiness Ehimen, in the streets of Abuja. Photo: Thomas Lohnes

30-year old Nosa Okundia fled the country after his parents’ house burnt down and the family was left destitute. He hoped to gain refugee status in Europe, but ended up in the hands of human traffickers. In a Libyan prison, Nosa – with his shaven head, and muscular figure – was elected to speak for the rest of the internees, and managed to bring them all back to Nigeria. Now he tries to stop others from attempting the perilous journey, telling his story in schools, churches and marketplaces.

Nosa knows it’s a huge challenge. In 2016, the year that he left, almost 40,000 other Nigerians also fled from poverty and hardship, attempting to cross the Mediterranean Sea to Italy. Dozens of them still set out daily. No one knows how many die in transit, from thirst, from beatings or being shot before they even reach the Mediterranean. 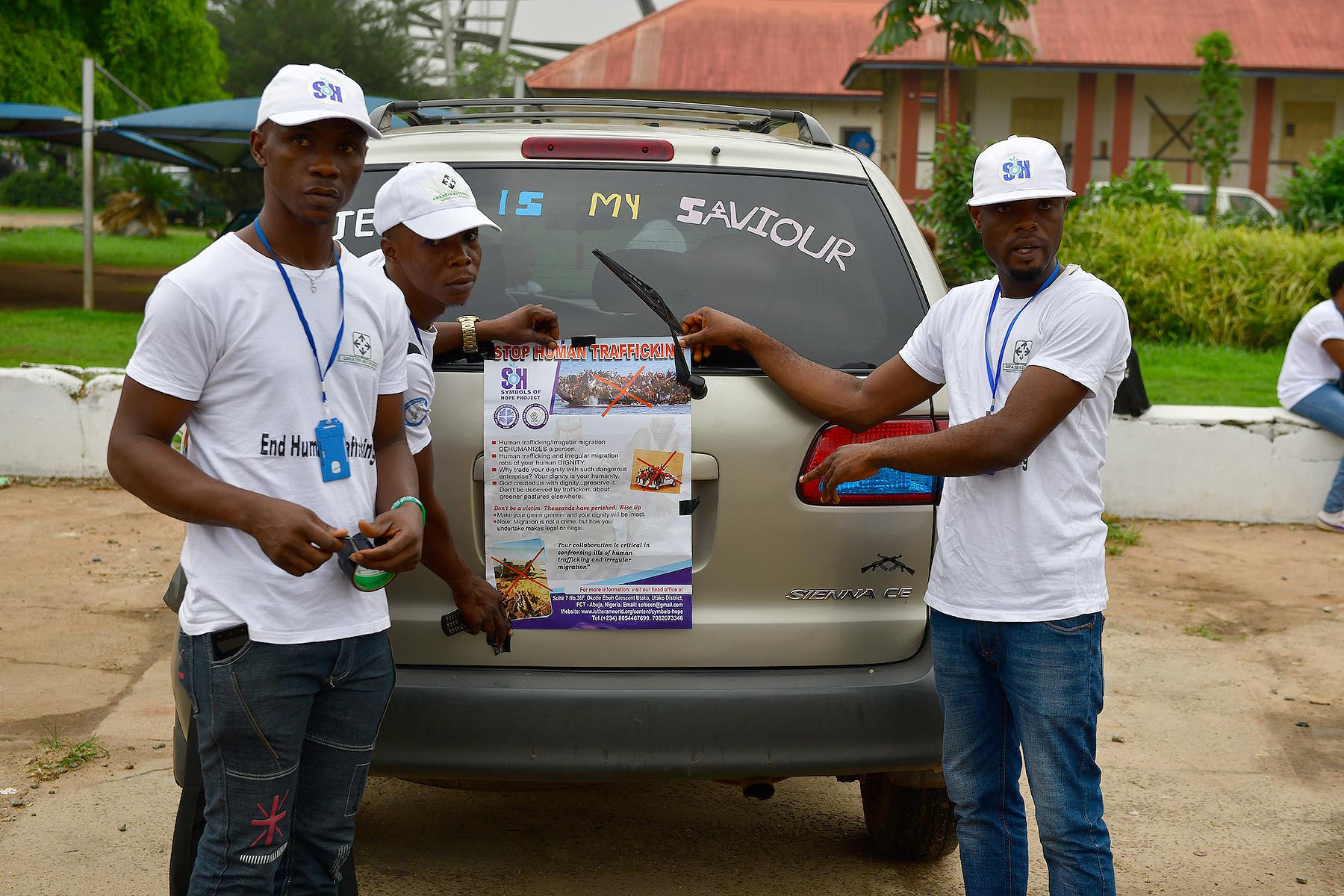 Impassively, Nosa observes the hustle and bustle at the bus station on the outskirts of Abuja, the capital of Nigeria. Passengers push their way onto packed buses. “Some of them are on the way to Europe,” he says. His colleague, Happiness Ehimen, sits beside him and nods. The 30-year-old has blonde extensions woven into her hair. She, too, has a hellish trip behind her. “I planned to leave Nigeria when my mother died. She only had a cough but we didn’t have any money for medicine and then she just died.”

Words will not suffice

A friend persuaded her to try her luck in Europe but today she knows how naive she was. “It almost cost me my life”, Happiness says. When she tells her story, the young people sitting on boxes or on the dusty ground clutching lemonade bottles, listen intently. The longer she speaks, the quieter it gets. 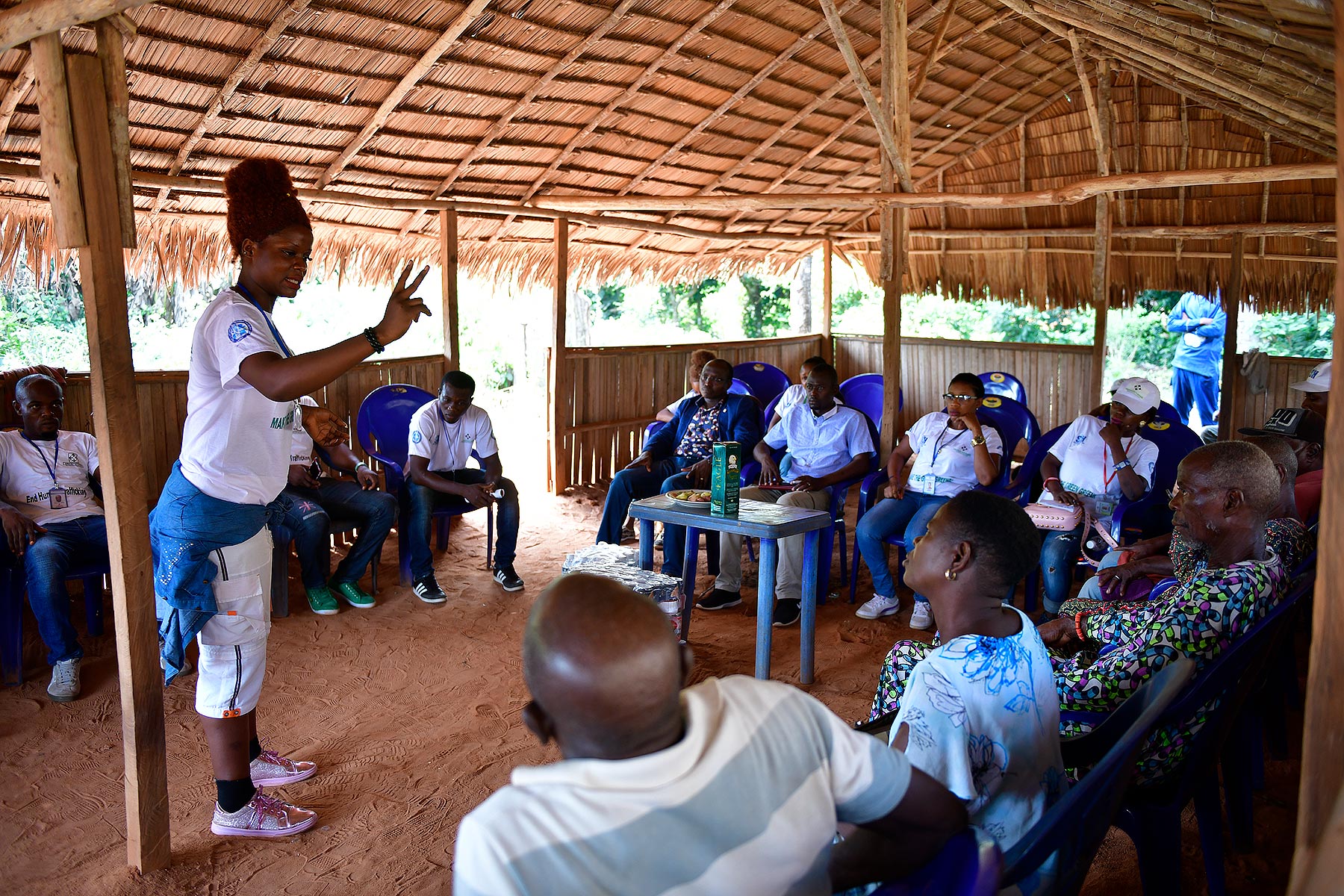 Happiness tells of the night she and others were taken across the border to Niger on motor bikes – with no lights, at breakneck speed. One woman fell off and was left behind. After travelling in a pick-up truck under the harsh Saharan sun, Happiness speaks of the rapes she suffered as she was handed over from one smuggler gang to the next. She sees that her listeners are shocked by her words and hopes it will help them to question the promises of the smugglers or withstand the pressure from friends and relatives. But she and Nosa know that their words alone will not suffice.

We tell our stories, we show videos that we made with our smartphones, but still most people ask: OK, we shouldn’t run away to Europe, but what do you offer us here instead?

After their talks, the two of them do the rounds of shops and small businesses to ask about training or work opportunities. “We tell our stories, we show videos that we made with our smartphones, but still most people ask: OK, we shouldn’t run away to Europe, but what do you offer us here instead?” Happiness says.

Their dream is to set up a center offering practical training courses and trauma therapy in Benin City, the hub for those wanting to leave, as well as for those returning from a failed getaway.

Nosa knows that returning is almost more difficult than leaving. He spent all his savings on the journey, is deeply in debt, and has lost his reputation among family and friends. Most returnees stay in Benin City because they simply can’t go home. But then many soon start asking whether they shouldn’t give it another try. That is what Nosa and Happiness want to prevent by offering alternative work and educational activities. 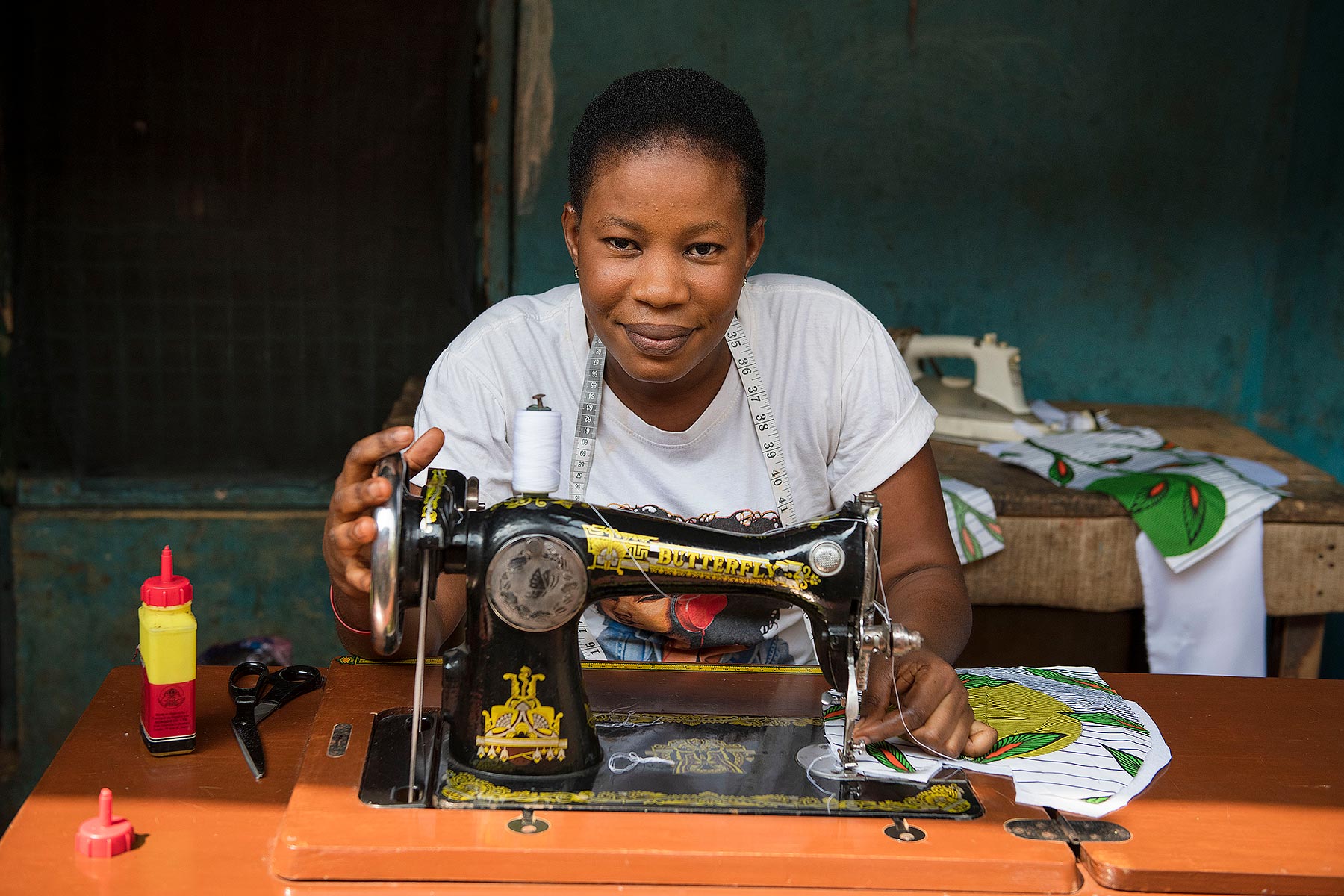 But it’s an uphill struggle against the traffickers who have nothing to fear in Nigeria. Mary George is deputy head of a special unit of the Nigerian police in Abuja, charged with stopping human trafficking. She and her colleagues have their office in an unprepossessing low building. “We are ready to tackle the job,” she declares. “But we lack the necessary equipment.”

There is no money to pay informants, Mary George explains, and even if they do hear about a gang trafficking a group of women somewhere in western Nigeria, they don’t have vehicles to go and intervene. There are no experts, there is no database. Mary George does not even have a computer of her own.

Lesmore Gibson Ezekiel used to be the pastor of the local Lutheran church and is now the director of LWF’s ‘Symbols of Hope’ program in Nigeria, which supports Happiness’s and Nosa’s work. “Among the security forces, who are supposed to fight the smugglers, there are some who work for them instead,” he says. The trafficking cartels are wealthy enough to buy Nigerian policemen, he explains. 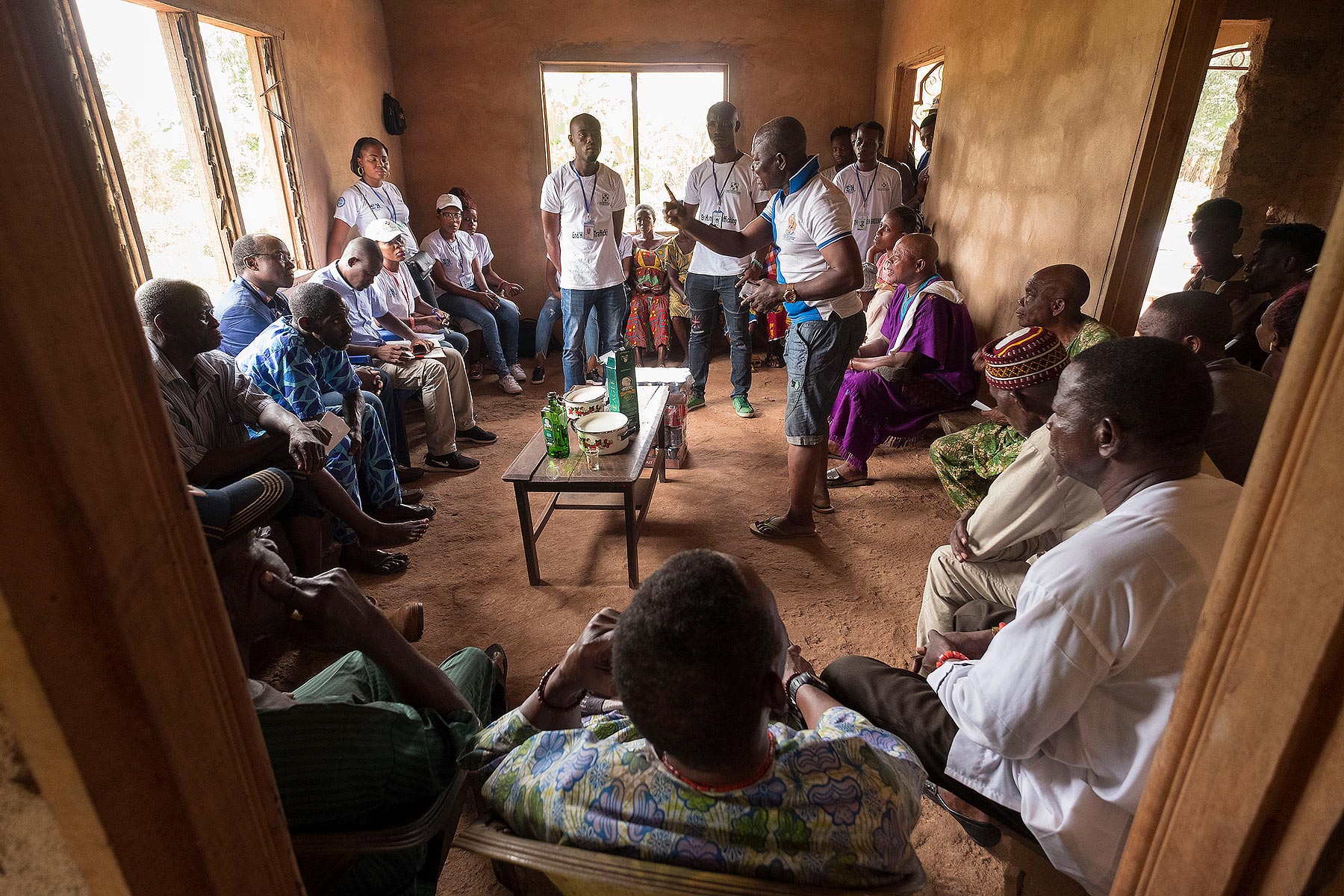 Parents lament their children, who have left the country

Meanwhile, the returnee center remains a dream, since the necessary funding, estimated at €250,000, is still lacking. “The state has left us in the lurch,” says Nosa, but he and Happiness refuse to give up hope. They live for their dream. Yet what if it fails? Nosa will not contemplate that. “I am threatened, and already several smugglers have told me: I’ll give you money if you stop spreading these stories. But I will not be put off – I just keep on going.”