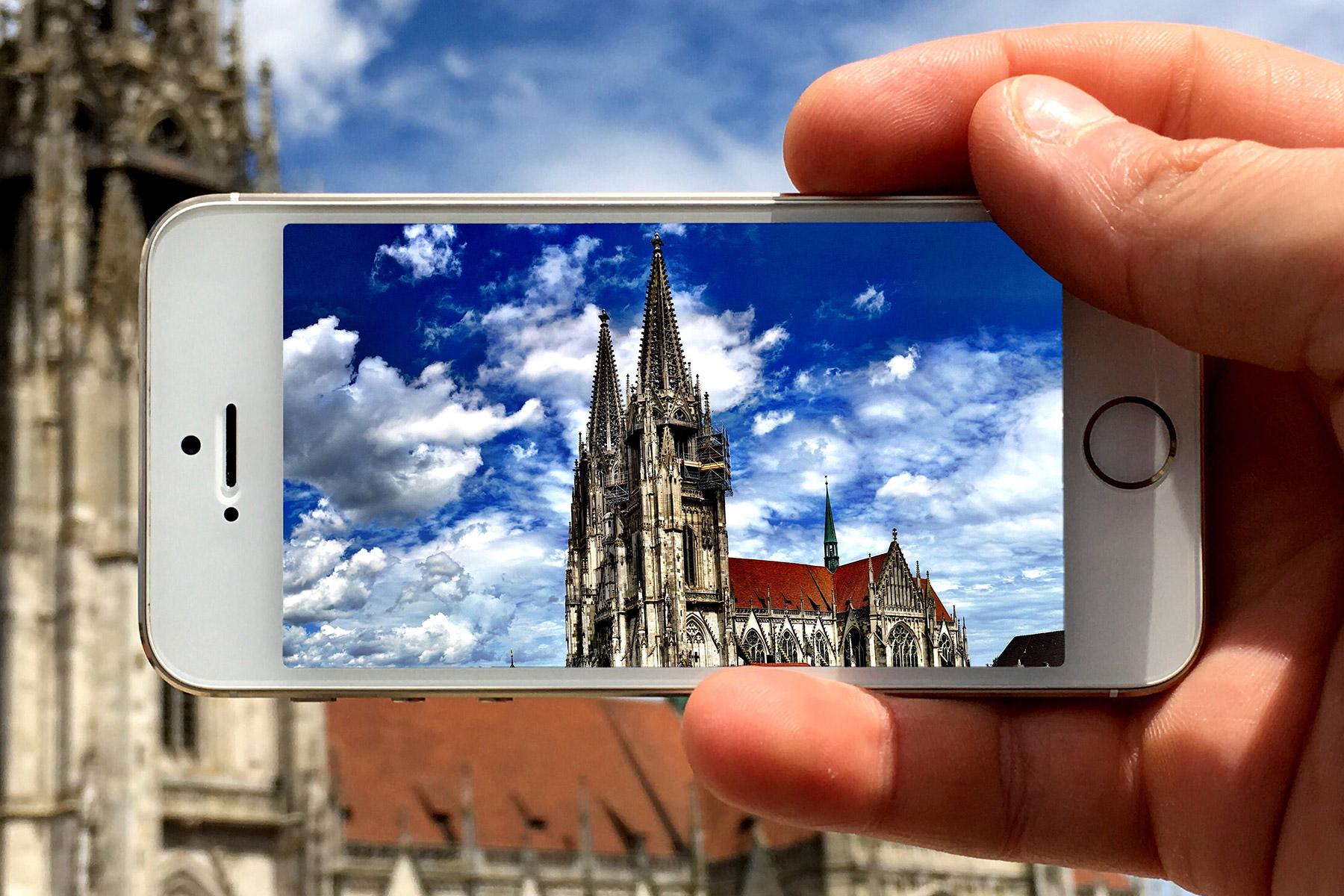 A look through a smartphone to the Regensburg Dom Cathedral, Germany. Photo: ANBerlin/ flickr

(LWI) - Lockdown, confinement and the prohibition of actual church services have sparked an immense creativity in German churches, a recent study finds. “We found that many congregations have very quickly adapted to the new reality”, says bishop Heinrich Bedford-Strohm, head of the Council of the Protestant Church in Germany (Evangelische Kirche in Deutschland, EKD), which initiated the study. “We have seen an incredible creativity, both in digital and non-digital formats. I have experienced that the Holy Spirit works despite face masks and social distancing.”

We have seen an incredible creativity, both in digital and non-digital formats. I have experienced that the Holy Spirit works despite face masks and social distancing.

Zoom-worship, church service from the living room, morning prayers on Facebook, spiritual influencers, Minecraft-services, and intercession hotspots are just some of the examples given by Rev Stefanie Hoffmann, senior church councilor in the digitalization department of the EKD. The EKD on their platform “Kirche von zuhause” accompanied parishes and congregations with advice, tools and webinars on how to continue church life without physical worship.

Lack of technical expertise was rarely an excuse not to go online, Hoffmann says: many congregations could fall back on the help and enthusiasm of especially younger members.

Online offers were often accompanied by offline  concepts for those who did not have reliable internet or the technical skills to use it. “We heard about telephone prayer chains, and about worship DVDs which were distributed in the congregation,” Hoffmann said. Congregations sent postcards and handed out “Easter worship bags”.

Pastors have been known to tour their congregations and give sermons and prayers outside via loud speaker. An Easter flashmob action invited people to play a specific hymn on Easter Sunday at 10 a.m. from their balconies.

Promoting priesthood of all believers

6.5 million people were reached through digital worship formats, an increase of 287 percent compared to regular worship, said Daniel Hörsch, who conducted the study. While the metadata  still needs to be evaluated, these numbers show “new glocal horizons”, Hörsch said. 72 percent of the congregations and parishes, who only started digital formats  during the COVID-19 confinement, want to continue, according to the study.

“Digitalization is a challenge for how we proclaim the gospel,” Hörsch said. “It promotes the priesthood of all believers, and brought things to light which we might have questioned already in more analogue times.”

Apart from lowering the threshold for interested people to experience a worship, many of the new formats also considerably reduced spoken word in favor of music and interactive formats. How to better engage those new, and younger, audiences in the church is one of the resulting tasks.

The new formats however also raised new questions. One of them touched on Holy Communion. “As protestant Christians we believe, that Christ is present in any worship service,” Bedford-Strohm said. The EKD therefore advised their members to “fast” Holy Communion. However, the idea of communion online has sparked a theological discussion within the church.

Pastoral care, especially in senior citizens homes and to dying people, was another challenge. “Online worship will never replace personal interaction in our church,” Bedford-Strohm said. He expects for “Hybrid formats” to become more popular: In-person worship services, which are also available online.

Never, however, was there any question to follow the authorities' instruction to refrain from worship during the peak of the crisis in the country, Bedford-Strohm emphasized. While it sometimes proved difficult to give advice with contradicting instructions in the German federal system, following those instructions was without question, and a sign of combining the freedom of a Christan with the responsibility for the neighbor. “As a church, we never understood ourselves as a lobby group, which is pushing their agenda”, he concluded.

COVID-19 rapid response fund: “A shared commitment to leave no one behind”
news