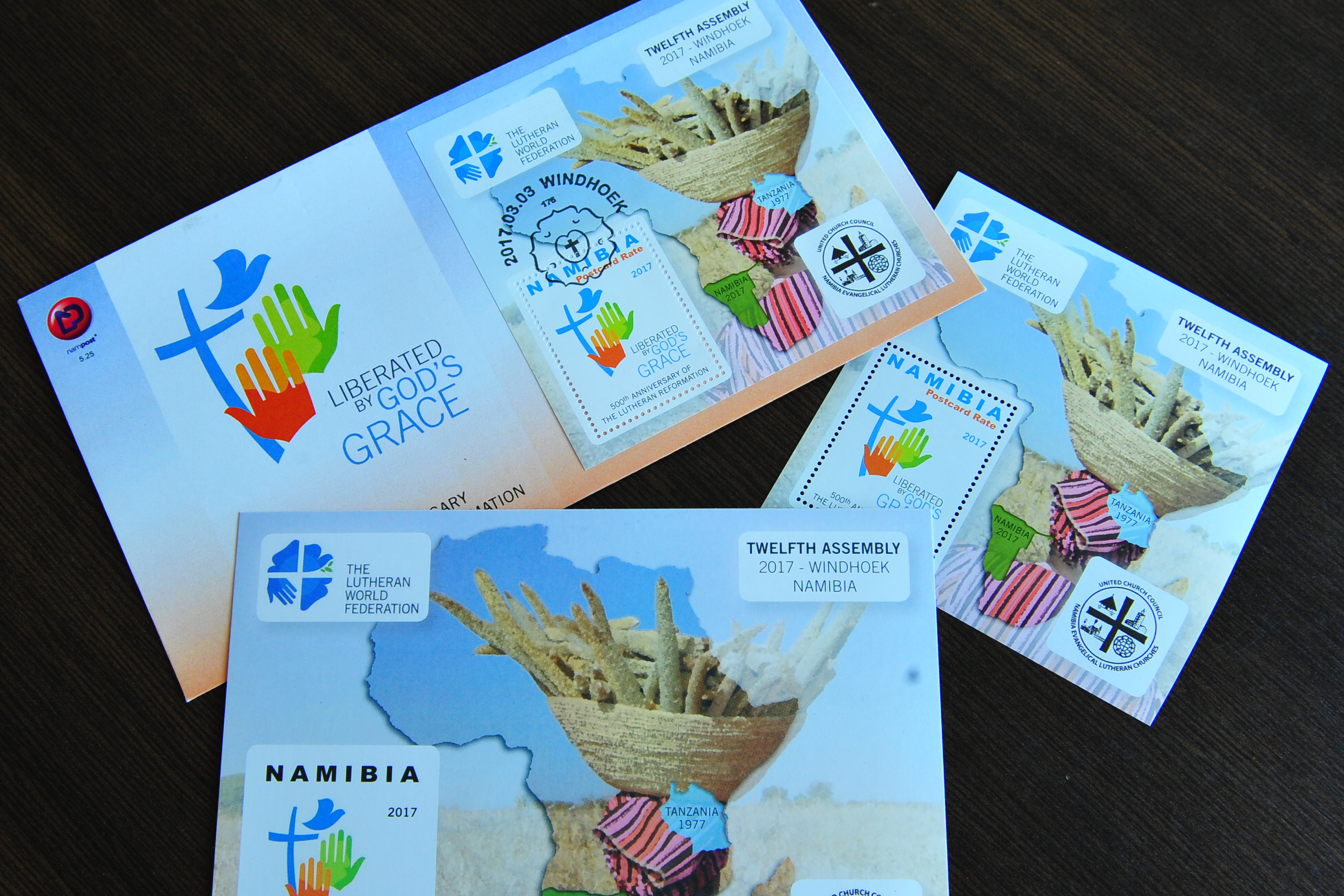 Commemorative stamps are being issued to mark the 12th Assembly and the Reformation Anniversary in Namibia.

Commemorating the Reformation and Meeting as a Communion

(LWI)  – As the Twelfth Assembly of the Lutheran World Federation (LWF) which is held in Windhoek, Namibia, from 10 to 16 May draws closer, NamPost - Namibia Post - is issuing a first day cover, a single stamp souvenir sheet and a post card stamp taking up the commemoration of 500 years of Reformation.

The design shows the outline of the African continent and of the two African countries that have been selected as venues for Assemblies of the LWF: Tanzania in 1977 and Namibia in 2017. They also show a Namibian woman balancing a basket filled with Mahangu on her head. Mahangu is a type of pearl millet grown in northern Namibia and a staple food in these rural areas.

The Assembly logo and the theme “Liberated by God’s Grace” are placed prominently on the stamp and the left side of the first day cover. During the Assembly, the LWF will host a global commemoration of the 500th anniversary of the Reformation in Sam Nujoma Stadium on 14 May with Assembly delegates from all over the world, the Namibian Lutheran churches hosting the Assembly and numerous ecumenical guests.

The text insert of the first day cover speaks of  the introduction of Christianity in Namibia:

The Lutheran doctrine was first introduced to local Namibians by the missionary Carl Hugo Hahn and his colleagues in 1842. Hahn translated the New Testament into Otjiherero, aided by Johanna Gertze, his employee and interpreter. The Finnish Missionary Society extended the Lutheran faith to Ovamboland in 1870, driven by key missionaries such as Martin Rautanen, who worked among the Ovambo people for 50 years and translated the New Testament into Oshindonga (published in 1903). The Bible has since been translated into most other Namibian languages. The first synod in Namibia was held in 1925 and the Evangelical Lutheran Church in South-West Africa, today the Evangelical Lutheran Church in the Republic of Namibia, was constituted in 1957. In the same year the Evangelical Lutheran Church in Namibia became independent.

Invitation to the Reformation Commemoration

The Local Assembly Planning Committee in Namibia will use the commemoration stamp to draw attention to the Assembly and the Reformation Anniversary, and is inviting Namibians to participate.  A total of 3,300 first day covers, 20,000 single stamp souvenir sheets and 15,000 post cards were issued.  They will be available as souvenirs for delegates and interested members of the public. A special date stamp canceller with the date 14 May 2017 - the Sunday of the Global Commemoration of the 500th Anniversary of the Reformation - will be released to be used during the Commemoration.

The first day cover, single stamp souvenir and post card can be ordered online at NamPost. They are also available at all post offices in Namibia and will be sold at the Omatala during the Assembly.

The Twelfth Assembly of The Lutheran World Federation (LWF) will take place 10-16 May 2017 in Windhoek, Namibia, under the theme “Liberated by God’s Grace”. Almost 800 participants — including nearly 400 delegates from the 145 LWF member churches in 98 countries worldwide — will participate. The assembly is the highest LWF decision-making body and meets every six to seven years.

The Assembly will give general direction to the work of the LWF for the next years. It will speak out on issues concerning the life and witness of the churches and the world. It will elect the LWF President and Council to serve until the next Assembly. At the Assembly the LWF will commemorate the 500th Anniversary of the Reformation.

Global Commemoration of the 500th Anniversary of the Reformation attended by thousands in Windhoek, Namibia
news
test news