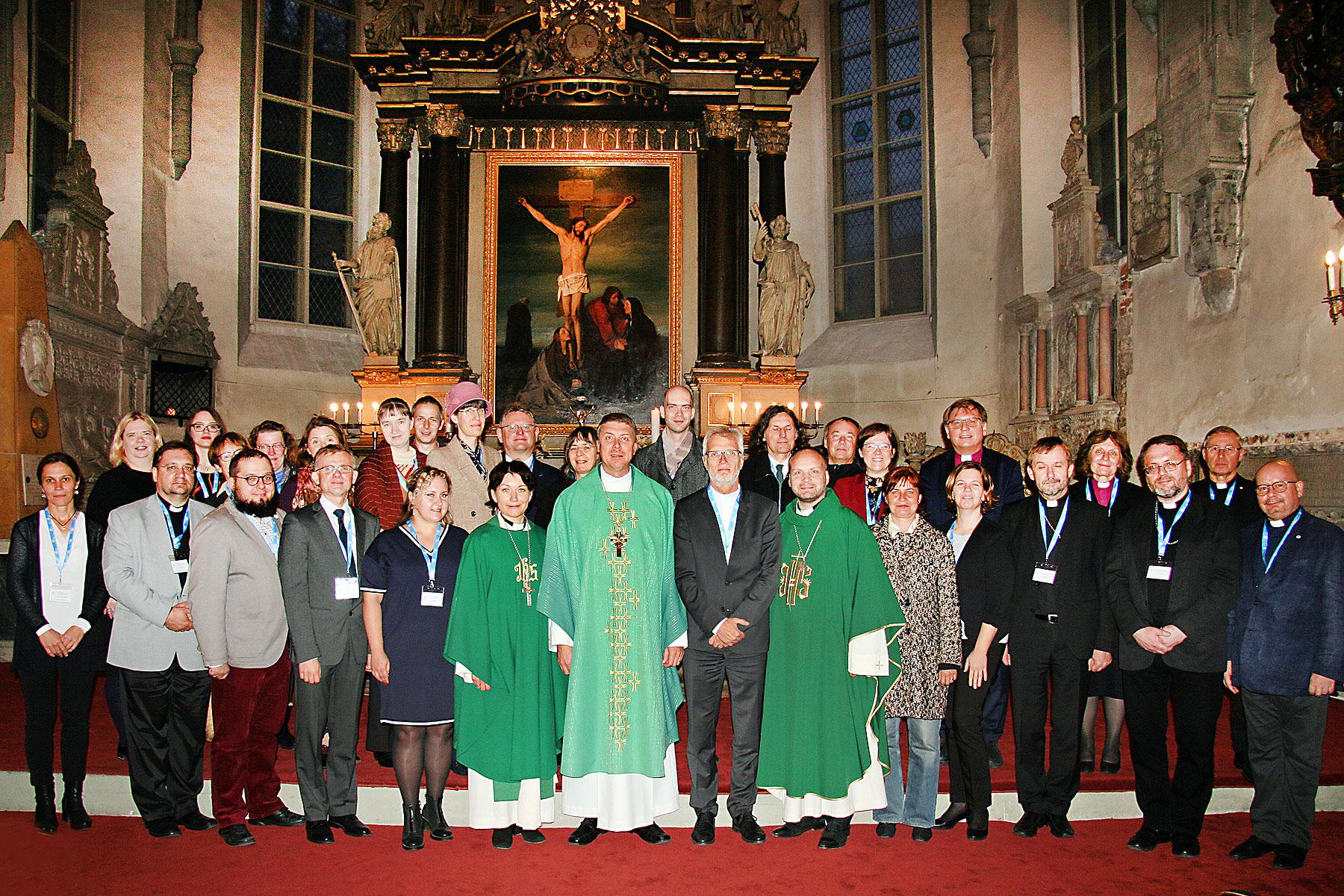 (LWI) – Churches should make sure that believers and the church itself are not pushed back into privacy behind church walls and away from the public space, said Urmas Viilma, The Lutheran World Federation’s (LWF) Vice-President for Central Eastern Europe and Archbishop of the Estonian Evangelical Lutheran Church which hosted the 2019 Church Leadership Consultation for Central and Eastern Europe.

„A church leadership conference for Central and Eastern Europe is especially important because the churches don’t have many possibilities to come together,” says LWF Area Secretary for Europe, Rev. Dr Ireneusz Lukas. The region might appear to be relatively homogeneous at first sight but the situation in each of the churches and countries differs considerably, he added.

The consultation with the theme “Diversity and identity – different kinds of gifts, but the same spirit... (1 Corinthians 12, 4-6)” took place from 28 to 30 October in Tallinn, Estonia, and offered space and time for reflection about the specific situation, challenges, hopes, but also about gifts the region could share with the rest of Europe and with the whole communion.

Presentations and discussions on Lutheran confessional identity, diversity and pneumatology (the study of the Holy Spirit) stood at the center of the consultation. Taking up impulses from the recent conference “We Believe in the Holy Spirit: Global Perspectives on Lutheran Identities” in Addis Ababa, Ethiopia, Rev. Anne Burghardt (Estonian Evangelical Lutheran Church) gave a summary of a consultation many participants described as inspiring and dynamic.

She referred to the study document Self-Understanding of the Lutheran Communion (2015) which describes the communion of churches in the LWF as both a gift and a task. Based on this the consultation approached the question “What does it mean to be Lutheran today?” pneumatologically. The questions harvested at the consultation will be formed into a research instrument for the next phase of the study process on Lutheran identities.

Relating the themes to the contexts in Central and Eastern Europe, Burghardt said: “The fact that our churches have lived under Communism has given us a special legacy of being critical towards the usual ecumenical language about peace and justice,”adding that it was often misused at the time. The challenge for the region would consequently be to overcome this skepticism in order to be able to actively transform society.

Concerning the interconnectedness of ecclesiology (the study of the church) and pneumatology she said she saw the churches in Central and Eastern Europe emphasizing individualistic piety, at the cost of creating a community of believers being ekklesia together.

A third remark concerned the role of charisms and the role of the Holy Spirit in Lutheran theology. “When we manage to develop a solid theology of charisms, we will more profoundly be able to live up to our Lutheran conviction of priesthood of all believers,” Burghardt is convinced.

Rev. Dr Elfriede Dörr (Evangelical Church of the Augsburg Confession in Romania) who also participated in the Addis Ababa consultation, welcomed the impulses given there and encouraged member churches to take up them up when responding to the research questionnaire that will be developed by the LWF following the processing of the outcomes.

Being churches in the public space

The diversity of the LWF member churches in Central and Eastern Europe became evident during the panel discussion about being church in the public space.

Elaborating on the situation in Poland in a predominantly Catholic country, Bishop Jerzy Samiec (Evangelical Church of the Augsburg Confession in Poland) explained how the Lutheran minority church raises its voice in the public debate. “Poland is divided into two camps,” Samiec says. On the one hand, the conservative, which presently is in power, and a diverse opposition on the other. The opposition is convinced that several legal acts by the Sejm - the lower house of the Polish parliament - violate the constitutional order of Poland. This situation leads to violent disputes.

Samiec elaborated on the dilemma of the church: When should church leaders address such developments and when is the church interfering with politics? One criterium used is to protect the weak, often different minorities. The second measure is to attempt to convince politicians that they should engage in political debate and not resort to quarreling, insults and slander. Samiec addressed such an appeal to the Polish President Andrzej Duda, saying politicians expressing mutual hate influence society negatively. The death of the major of Gdańsk, Paweł Adamowicz, at the beginning of the year was one of the effects of this situation. The last criterium is to state clearly that preaching the Gospel is preaching love. “Aggression and hate speech under the banner of defending the church or Christ is not Christianity,” Samiec is convinced.

Dr Klára Tarr Cselovszky (The Evangelical Lutheran Church in Hungary) spoke about the careful steps the small church has taken into the public space after the fall of the iron curtain in 1989. In the years prior, the church did not have any presence in the public space whatsoever. “We built our presence in social and educational areas, maintaining a critical solidarity with state and society,” she says. “For this it is very important to be credible and trustworthy.” Yet, problematic issues of the past must be dealt with. Thus, a commission has been installed to unveil entanglements with authorities such as the secret police during the Communist era.

With 34 percent of the population, the Evangelical Lutheran Church of Latvia forms the biggest religious community in the country. The basic question for Archbishop Jānis Vanags in this context is “How much should the church be involved in the political life of a society?” His church looks back on repression and persecution during Soviet times, resulting in up to 80 percent of the clergy being deported or killed. Since 1987 a movement called “Rebirth and Renewal” to which Vanags belonged, strove to liberate the church from Soviet influence. Today, the church enjoys access to the public space and high public recognition. This brings new challenges with it – up to the point that Vanags refused to preach during a church service held on the annual Constituent Assembly Convocation to protest against corruption by government officials.

The training of pastors is a complicated yet urgent matter in a region without one connecting language, small churches and diverse contextual settings. After a visit to the Theological Institute in Tallin as well as presentations of the topic by Rev. Dr Elfriede Dörr (Evangelical Church of the Augsburg Confession in Romania), Dr Jerzy Sojka (Evangelical Church of the Augsburg Confession in Poland) and Anton Tikhomirov (Federation of Evangelical Lutheran Churches in Russia and Other States) participants discussed possibilities for closer cooperation in the region and other partners as well as new digitalized methods of learning.

During the last session, summing up the meeting in Tallinn, Archbishop Viilma emphasized the need to open up and use all the gifts of the Holy Spirit by churches in the region. Speaking about the role of the church in public space, Bishop Dr Tamás Fabiny (The Evangelical Lutheran Church in Hungary) said, “Churches should be present all the time but speak only when needed”. He also emphasized the role and importance of communication networks for minority churches: “It remains an important tool to build bridges in totally different contexts.” LWF Council member Vera Tkach (Federation of Evangelical Lutheran Churches in Russia and Other States) emphasized the importance of the consultation for Central and Eastern Europe meeting where specific issues relevant for the region could be shared and discussed.

See photos of the consultation

Living together as a communion
news