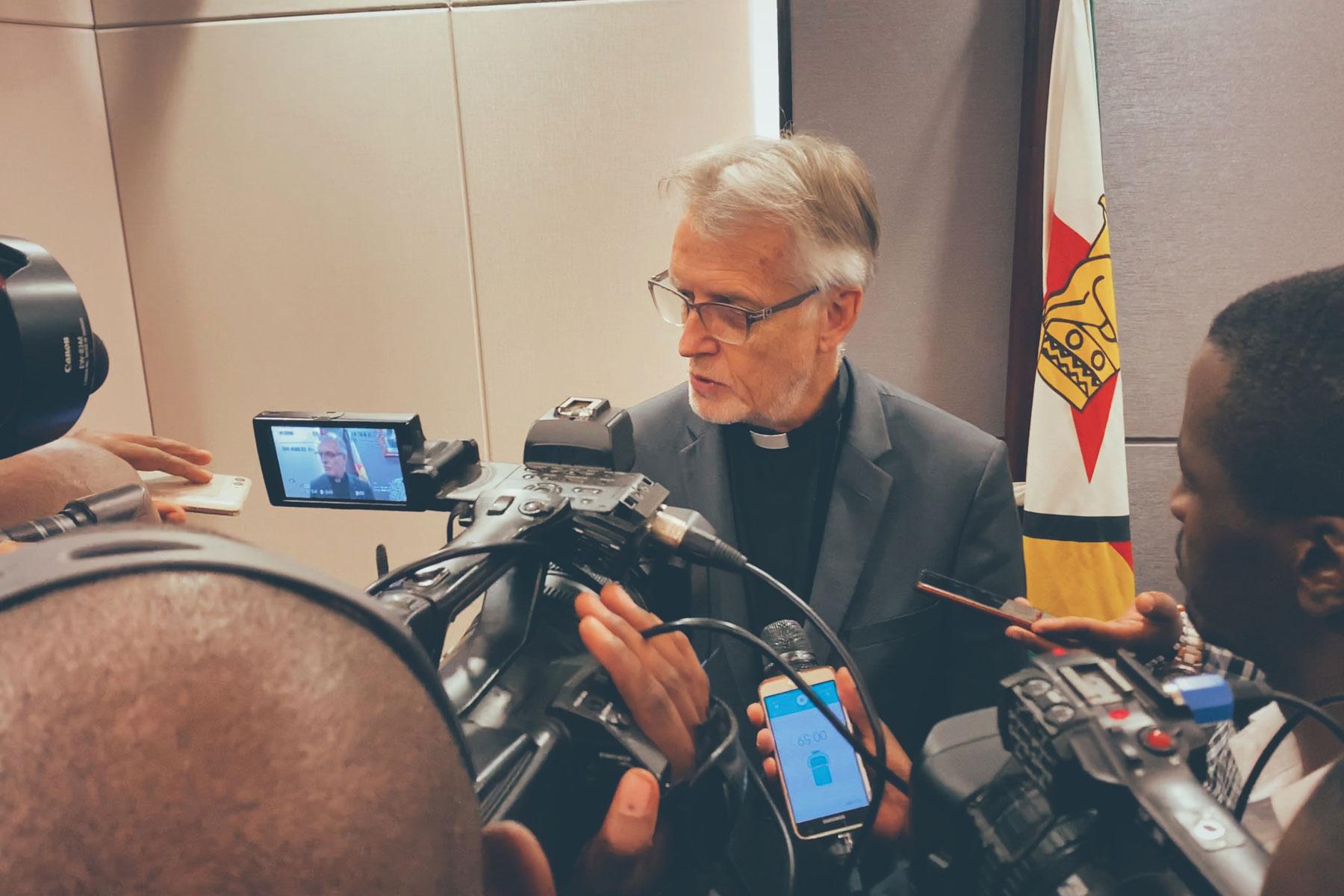 (LWI) - Churches around the world today are called to combat “exclusionary, discriminatory narratives and policies”, modelling instead “inclusion as Jesus taught it.” That message was at the heart of a lecture by Lutheran World Federation (LWF) General Secretary Rev. Dr Martin Junge to the Zimbabwe Council of Churches (ZCC) at the Anglican Cathedral hall in Harare on 3 March.

The Lutheran leader’s talk on ‘The Role of the Church in the Public Space’ was delivered in memory of Rev. Herbert Chikomo, the first General Secretary of the ZCC. Chikomo was a pivotal figure for ecumenism in Africa and led the Council during times of independence and nation building.

In his introduction, ZCC General Secretary Rev. Dr Kenneth Mtata said that "to have a Latin American remembering an African theologian” was a beautiful “expression of the oikoumene,” or fellowship of churches.

The lecture came on the penultimate day of a visit to the southern African nation, hosted by the Evangelical Lutheran Church in Zimbabwe (ELCZ). After thanking the church for the many gifts and contributions it has made to the global Lutheran family, Junge noted that the participation of churches in the public space is not driven by “particular political alignment’ but rather by profound theological convictions.

Just as God sent his Son into the world to bring us life in abundance, Junge said, so “the church is part of God’s ongoing movement into the world.” As the churches in Africa have taught us, he continued, we are called to participate in God’s holistic mission, which includes “proclamation of the word, serving the suffering neighbor and advocating for justice, peace and reconciliation.”

In this context, Junge said, we must resist efforts to confine religion to the purely private sphere, affirming instead that faith, while deeply personal, also compels us to engage in the public space. Recalling the vital role that the churches playing in fighting the scourge of apartheid, he warned that those in power often fear or seek to manipulate faith communities because of their important role as agents of transformation within civil society.

Defining the public space as somewhere that allows equal access and is safe and participatory for all members of society, the Lutheran leader said the “call of the hour for the churches globally” is to combat the current global narratives of exclusion and discrimination. “There can’t be community in church and society, if there is exclusion,” he stressed, adding that “there can’t be development, if communities are divided” and if some people are left behind or “told they don’t really belong.”

Churches themselves need to hear, receive and model this call for inclusiveness, Junge insisted, adding that “they should never point a finger at others and say what they should do without first assessing their own approaches and attitudes.” The public space, he continued, does not tolerate attitudes of “moral superiority” but rather “welcomes dialogue, collective discernment and negotiation.” Collaboration with ecumenical, interfaith and other secular partners is important in this regard, he added.

Junge also appealed to his audience to include “women and youth as distinct and vital voices for the public space,” adding that it will be hard for the country and the continent to move forward without their full participation.

The Evangelical Lutheran Church in Zimbabwe joined the LWF in 1963 and has close to 300,000 members. It is part of the Lutheran Communion in Southern Africa (LUCSA) and has its headquarters in Bulawayo, the second largest city in the country situated 440 km southwest of the capital Harare.