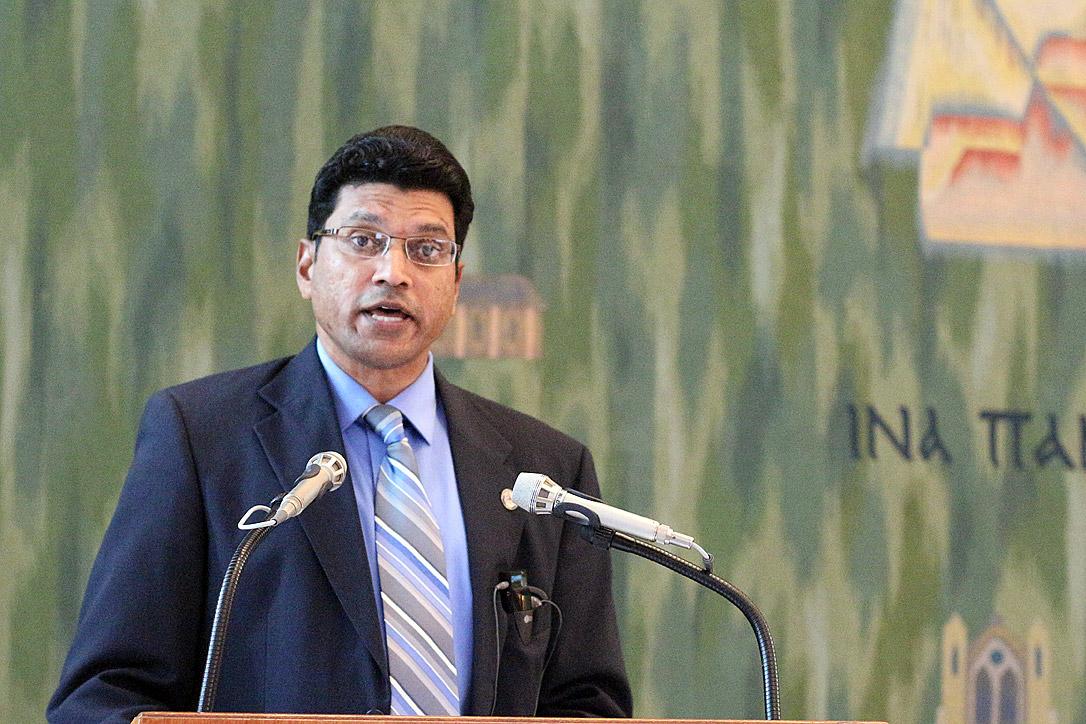 Michael Ram, chairperson of the Committee for Advocacy and Public Voice, presents the committee's report at the June 2015 LWF Council meeting in Geneva. Photo: LWF/Helen Putsman

The focus on global poverty reduction was one of the resolutions of the June 2015 LWF Council meeting in Geneva. In an interview with Lutheran World Information, Ram, from Guyana, reflected on the relevance of this action for the Evangelical Lutheran Church in Guyana (ELCG) and the country as a whole.

“Despite progress made over the past decade, poverty is still one of the major issues in Guyanese society,” said Ram, who is the newly-appointed chairperson of the LWF Committee for Advocacy and Public Voice, which presented the recommendation for Council decision. The resolution, From MDGs to SDGs: Putting Diaconal Participation into Practice, was based on discussion of the UN Millennium Development Goals, established in 2000 as benchmarks for tackling global poverty. The UN will assess progress on the eight targets at its summit this September.

The Council called on LWF member churches to “stay informed about the final stages of the negotiations on the Post-2015 Development Agenda, of which the SDGs [Sustainable Development Goals] are a significant part.” Churches in their respective contexts were encouraged to advocate for funding and support, and to enhance “story sharing and advocacy” in their diaconal and theological work.

“Poverty in Guyana is mainly human-made due to poor management and distribution of national wealth,” Ram said. With a new government since mid-May, expectations are high that there will be accountable use of revenue from natural resources, especially bauxite, as well as gold and diamonds, he noted.

“However, huge strides have been made in creating job opportunities and attracting investment, as the country lacks the capital, material and human resources to develop some of its mining sectors and explore oil. Ongoing advocacy by the ELCG and other churches is therefore necessary to strengthen such focus,” said Ram.

He cited government allocation of 10,000 housing lots to low-income citizens in the last few years as a positive indicator. “The extended housing projects offered affordable home ownership for a cost that is as low as USD 300,” he said. Still, there are challenges, “as the last government was accused of corruption and ‘filling their pockets’ in carrying out these projects,” Ram noted.

For the welfare of others

Guyana has made commendable progress on its Millennium Development Goal commitments, according to the UN Development Fund, Ram said. The portion of the population living in extreme poverty declined from 18.6 percent in 2006 to around 17 percent in 2010. It is currently estimated at 13 percent among the country’s 735,500 people.

Notable efforts have been made to reduce hunger and the under-five child mortality rate, to improve access to social services, to both enrol children in primary education and for them to complete primary schooling, and to increase women’s empowerment.

Although the Lutheran church lacks a national structure to tackle poverty-related issues, its parishes are encouraged to establish programs. “When we seek to address the needs of others it should not be to our own benefit, but for the welfare of others,” Ram concluded.

The Evangelical Lutheran Church in Guyana has 11,000 members organized in 13 parishes with 45 congregations. It joined the LWF in 1950.