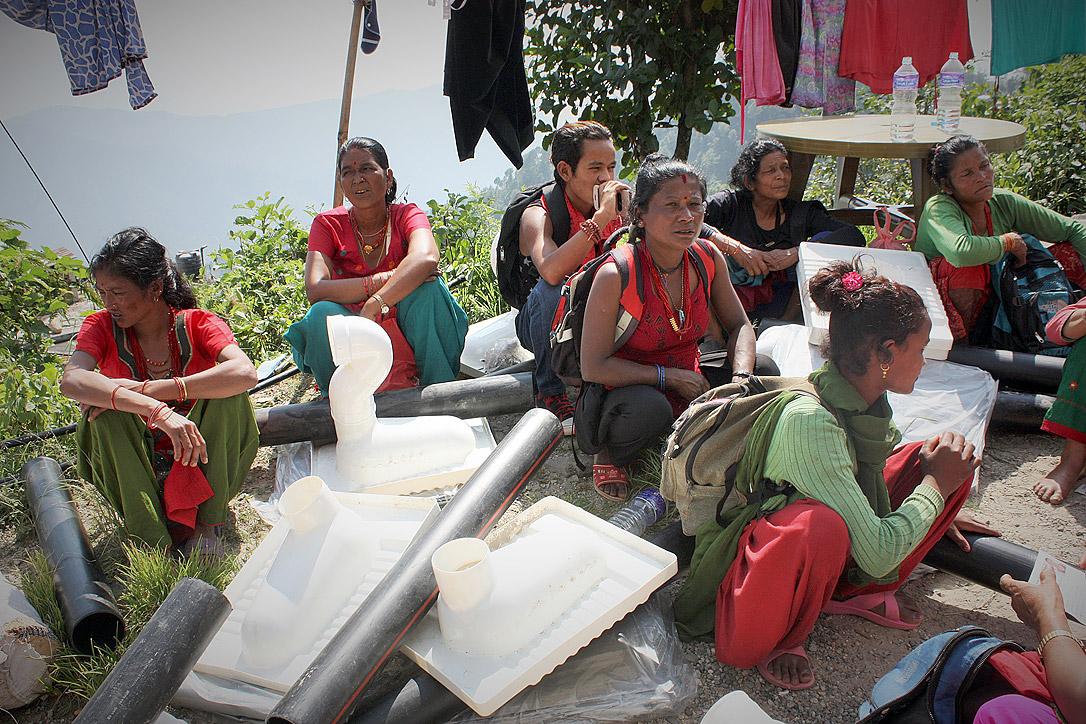 (LWI) - They walked for six hours on muddy trails, crossing mountain streams and braving landslides. Many were mothers, carrying small children. They came alone, as their husbands had left to work in Qatar or Malaysia. Old men were among the number too, their backs bent from a life of exhausting labor. One of them braved the treacherous road on an artificial leg. When the distribution started they sat down in the hot sun, waiting for their names to be called.

The people of remote Yarsa in Rasuwa district were doubly hit during the earthquakes that struck Nepal earlier this year. They not only lost their homes and were forced to live under a tarpaulin or in a cow shed, they also got cut off from the rest of the world because of recurring landslides. Among them are disabled people, women without husbands and so-called Dalits - ‘untouchables’ tainted by birth in a caste system that deems them impure.

But on 29 September 2015, the people of Yarsa received materials to build a temporary shelter and toilet. The much-needed support is the outcome of the world’s first official collaboration between global Christian and global Islamic humanitarian organizations. The Lutheran World Federation (LWF) and Islamic Relief Worldwide (IRW) in August signed an agreement to cooperate in humanitarian relief efforts.

In Nepal, LWF Nepal and IRW joined hands to support the people of five Village Development Committees of Rasuwa district. This mountainous district bordering Tibet was among the five worst affected provinces. A total of 430 people were reported killed and 753 injured. Most of the casualties occurred in an avalanche that buried Langtang village and its surroundings. An estimated 80 percent of the population of Rasuwa was affected by the earthquake and 8,000 buildings were destroyed.

The Yarsa people were among the last to be reached by LWF and IRW. The road leading to the area had been wiped away by fresh landslides, and the agencies faced logistic difficulties in getting enough corrugated iron sheets from India. In the presence of Lutheran World Federation Nepal officer Manoj Timilsina and Islamic Relief Worldwide officer Bilal Achmad Zargar, materials such as high quality corrugated iron sheets, mesh wire, plastic squat toilets, pipes, cement and nails were handed over to the Dalit families. They also received 2,000 Nepalese rupee each (just over 19 USD) to pay for construction expenses.

No longer living under tarpaulins

After living in a cow shed or under a tarpaulin for five months, the materials were welcomed . “I feel so relieved today,” said Sita. “It’s been quite a challenge to live under a tarpaulin. We still experience aftershocks and the monsoon rains give us much trouble.” The 42-year-old mother of three will have to organize the construction of her new shelter and toilet alone. Her husband works as a migrant labourer in Malaysia.

Subha, 40, reached the distribution point with the help of his artificial leg and a kind neighbor. “Life became difficult after I became disabled and my wife left me. But I am supported by my friends. With their help and thanks to these materials I can build myself a better shelter,” said the Dalit farmer, showing a big smile.

The distribution raised some concerns too. A worried Dhan Bahadur, 60, wondered out loud where he should build his shelter. “No place is safe in our village. We are surrounded by landslides. Unless the government provides us with a safe piece of land we will continue to feel vulnerable.”

Cooperation an example of social harmony

In the first phase of the collaboration between LWF Nepal and IRW, which involved local partner Manikor Society, 2,042 families were supported with temporary shelters and toilets. During a 10-day workshop, 90 people were trained in carpentry to ensure the construction of safe and strong structures. The second phase of the partnership will focus on building permanent new homes.

“The partnership between LWF and IRW acts as an inspiration,” LWF Nepal Country Director Dr Prabin Manandhar said. “Faith based-organizations working together to reach out to the most vulnerable show the way forward towards solidarity and social harmony in a divided world.”

Manandhar believes the unique collaboration helps agencies critically look at their own prejudices and weaknesses, as well as to complement their strengths. Says Manandhar: “A Christian and Muslim agency work closely together in a largely Hindu country to support a Buddhist minority. This partnership proves that religious harmony does not have to be a mere dream.”

During the relief phase, LWF and IRW have separately provided assistance to more than 110,000 Nepalese people, and in the recovery phase are able to reach many more by combining resources.