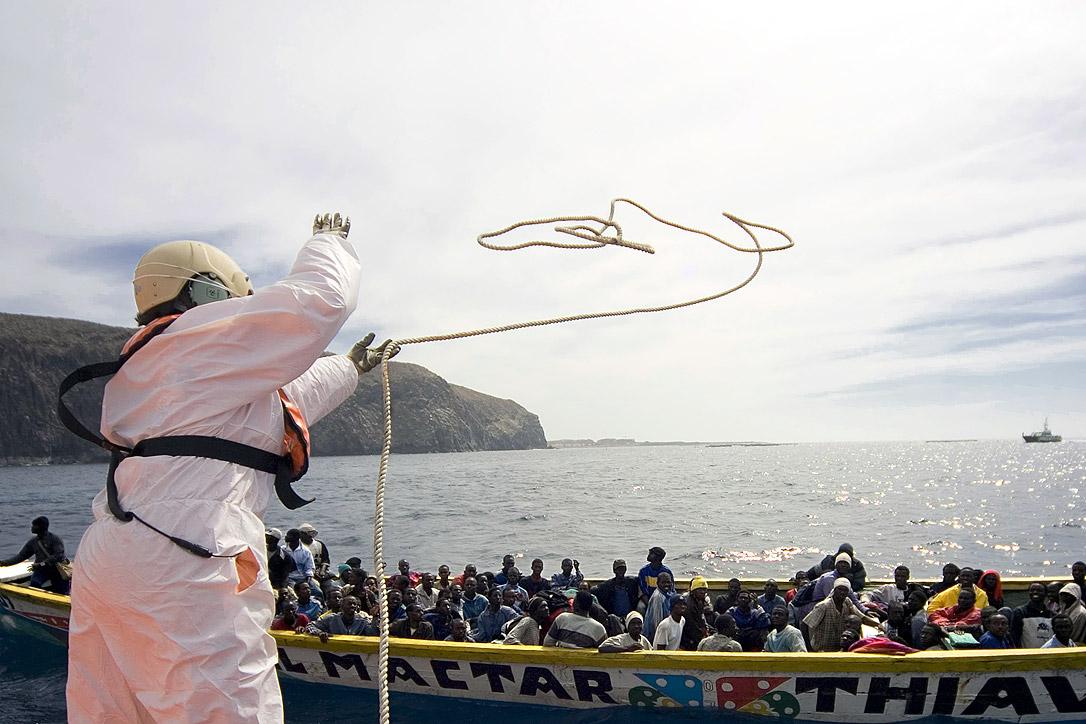 The Spanish coastguard intercepts a traditional fishing boat carrying African migrants off the island of Tenerife in the Canaries. Photo: UNHCR/A. Rodriguez / 24 October 2007

GENEVA, 5 August 2015 (LWI) - During its 2015 annual meeting, the Council of The Lutheran World Federation (LWF) endorsed a resolution concerning migrants. In this resolution, it “expressed its deep concern for the increased number of migrants who are forced to undertake dangerous journeys to flee violence, oppression, economic or environmental hardship.”

The resolution is meant to draw attention to all regions of the world, including the Mediterranean, where refugees risk and often lose their lives every day trying to reach Europe. Other vulnerable groups include the Rohingya and Bangladeshi people who flee oppression in their home country across the Andaman Sea in southeast Asia, refugees from West Papua, Haitians in the Dominican Republic and those detained by Australia.

The LWF council also mentions the “children and other people fleeing violence and land grabbing” in Central America. One of them is the 16-year-old son of Caroline Alvarado from San Salvador, who left for the United States, but has been caught and sent back twice already in the past 20 days.

“He can’t live here anymore, he can’t even leave the house because the gang members will threaten him,” she says. “They want to force the gang initiation rite on him.” Her son also works as a fisherman but the local gang violence prevents him from working and getting an education. “He even stopped going to school because he was so scared,” Alvarado says.

According to the United Nations, El Salvador is one of the world’s most violent countries. In 2014 it had the fourth highest homicide rate in the world. Murders, human rights violations and gang violence are everyday occurrences and compel young people and children especially to undertake the dangerous journey to Mexico and the United States. On this dangerous trip they often experience more violence, sexual abuse and kidnapping.

The LWF World Service program in Central America, which has offices in Nicaragua, Guatemala, Honduras and El Salvador, advocates for peace and supports human rights defenders, among other issues.

In its resolution, the LWF Council calls upon member churches to work with and advocate for migrants in their communities, and to look for opportunities to help migrants return home safely and in dignity. It also refers to the document “Welcoming the Stranger: Affirmations for Faith Leaders” initiated by the LWF and signed by more than 1700 representatives of major faith groups in 2013. It was endorsed by the United Nations High Commissioner for Refugees (UNHCR) and suggests a code of conduct for welcoming migrants in host communities.

Read the Council resolution on migrants and Welcoming the Stranger. See leaflet on migration advocacy produced by Central American members