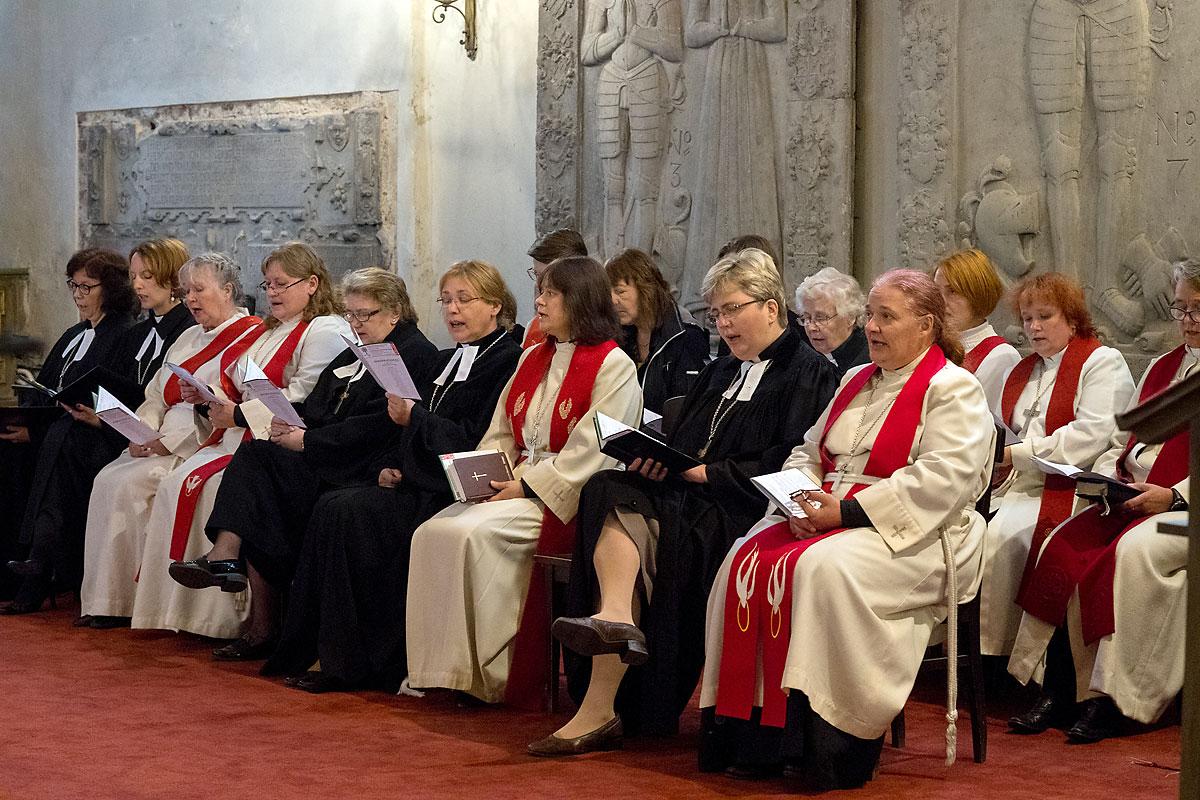 Tribute to Rev. Laine Villenthal and call for ongoing reformation

The 7-8 September event, which was also part of commemorations of 500 years of the Reformation in Estonia, opened with a eucharistic worship in the EELC Cathedral in Tallinn. Delivering the sermon, Archbishop Urmas Viilma referred to the first woman in the ordained ministry in the church—Rev. Laine Villenthal (1922-2009)—whose ordination took place on 16 November 1967 at the same cathedral. She went on to serve as a parish pastor in the southern town of Pindi until 2003.

It is only because of the grace of Jesus Christ I stand here!

The EELC archbishop, who is also The Lutheran World Federation (LWF) Vice-President for Central Eastern Europe, cited Villenthal’s ordination sermon: “‘It is only because of the grace of Jesus Christ I stand here! We two, [she and a male pastor Rev. Harri Rein] who were just ordained, were not made pastors by our parents though we owe them for the burden of raising us up, nor by the school, where we received the necessary knowledge needed for daily life. There is also no reason to give credit to the church government for this, though the respective decision was made by them. We have been made pastors only by the loving grace of God that has been revealed in Jesus Christ and seeks sinners. Because it is like this, the lives of both of us belong into the service of this grace. We want to confess of this grace with word, deed, and with our whole life. We’ll begin right away.'"

Archbishop Jackelén spoke about the Reformation and responsibility with the world, and Bishop Fabiny shared his experiences from Central Eastern Europe and the history of churches and societies there during the communist period.

LWF’s commitment to women in the ordained ministry

Addressing the conference, Rev. Dr Elaine Neuenfeldt, secretary for the Women in Church and Society program at the LWF, said that since 1984, consecutive Assemblies have affirmed the communion’s commitment to the full integration of women in the ordained ministry in the church. She reported on a survey done with LWF member churches in all the seven regions, showing that this has been a long process, with 119 of the 145 churches or 82 percent currently ordaining women compared to 77 percent in 2012. The survey shows that the reflection on the full participation of women in the ordained ministry is on-going in those member churches that do not yet ordain women. The LWF, Neuenfeldt added, also encourages churches to enable women’s participation at various leadership levels of the church.

Speaking on the ecumenical dimension of women’s ordination, LWF’s secretary for Ecumenical Relations, Rev. Anne Burghardt, herself an ordained EELC pastor, presented the main arguments that have been used in multi-and bilateral dialogues both for and against women’s ordination. She pointed out that it was not enough to “just argue with a couple of Bible passages, as the main questions are on the broader understanding of biblical witness which includes our understanding of issues such as ministry, Christology and new creation in Christ, among others.”

Prof. Dr Anne Kull, head of the Chair of Systematic Theology at the School of Theology and Religious Study at the University of Tartu presented a paper on women in the reformation. She wondered why important and active women in the 16th century Reformation period are not widely known and called for an effort to profile such contribution.

The conference was an educational and inspirational event that encouraged not only participants but also churches to continue in ongoing reformation.

The EELC has around 180,000 members and it joined the LWF in 1963. While one fifth of its 213 clergy comprise women, they are not represented in the governing bodies of the church.