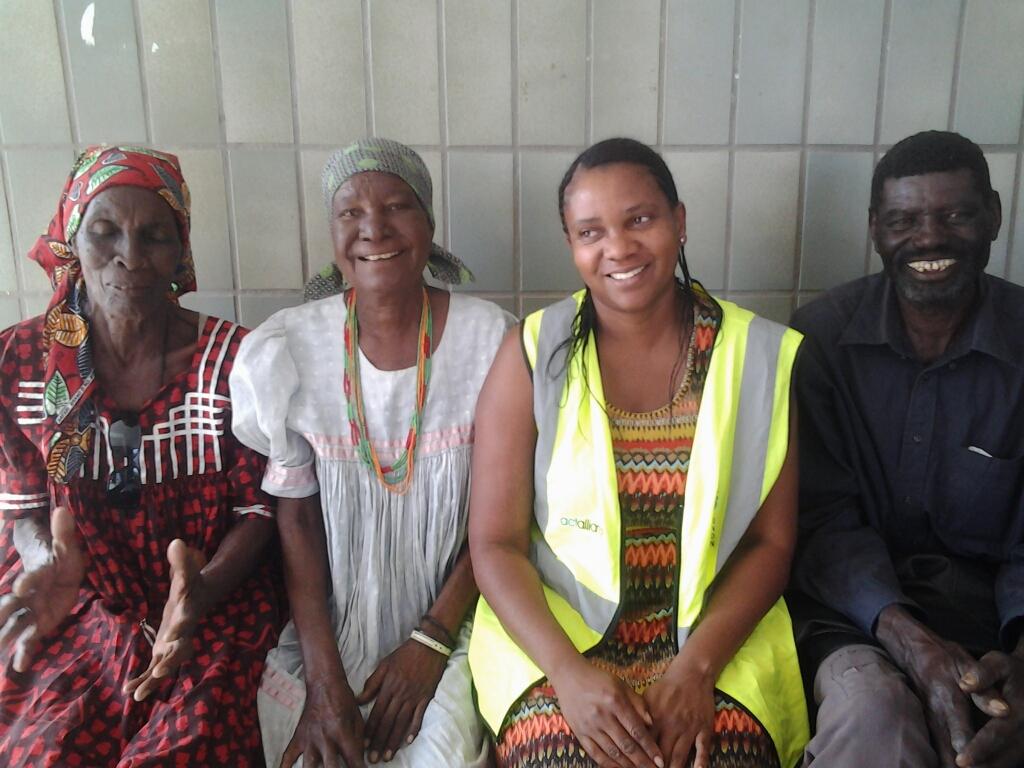 Food, Water and School Uniforms for Drought-Affected Families in Amperbo

(LWI) – Sophia Fredrick, 40, says she will first use part of the 800 Namibian dollars (USD 80) she received recently to pay her contribution towards costs for the diesel pump that supplies fresh water in her village. Then she will buy food for the family, and if anything remains, she will purchase urgently needed school uniforms, so that her children can go back to school like the others.

Since 24 September, the mother of six sons, aged between 22 and three years, is among village residents in Amperbo, southern Namibia, who are receiving a monthly cash payout of 100 Namibian dollars (USD 10) per head to help families affected by the current drought meet their basic food and other household needs.

The Lutheran World Federation (LWF) supports the emergency response program coordinated by the three LWF member churches in Namibia. The goal is to ease suffering through immediate relief assistance and build resilience to cope with the disaster at household and community levels.

An estimated 800,000 Namibians out of a population of 2.1 million are severely affected by the worst drought in nearly 30 years. The majority face not only a shortage of basic food but also diminishing pastures for their livestock, and reduced availability of water for domestic use. The first phase of the cash relief program targets nearly 5,000 people, including the residents of Amperbo, some 300 kilometers from the capital Windhoek.

The cash distribution to vulnerable families is supported by the Namibian postal services, NamPost. Experience with paying out cash for basic household needs has also been gained in the past few years through the ELCRN basic income grant (BIG) poverty alleviation project among marginalized rural communities.

The money paid out is stored on a chip card issued to the designated family member, and withdrawals can be made either at the nearest bank or post office. Sometimes the service provider makes a mobile cash dispenser accessible to the remote villages.

Fredrick and her husband do not currently have any gainful employment. When the rains were still regular, he used to build fences for goat herds, guarded sheep or did odd jobs. Before the churches’ intervention, the children would often go to bed hungry, because they did not have even the most urgent necessities and the price of staple foods has risen enormously.

Fredrick still remembers when the last rains fell in June 2012. And, she adds, it rained very little on that day 15 months ago. Today the area in and around Amperbo looks more like a desert than a flourishing community.

The cash payments are also intended to prevent many farming families from eating their own seed, otherwise when the rains come again, they would not have enough to sow in their fields. Children, in particular are to be guaranteed a balanced diet as many of them suffer from malnutrition.

When LWF General Secretary Rev. Martin Junge recently visited Amperbo accompanied by other leaders from the Lutheran communion, he emphasized the need for early and appropriate response. “We have learned from the experiences in Dadaab in Kenya,” he said, referring to the many people who lost their lives two years ago because of the late arrival of emergency aid following prolonged drought in the East and Horn of Africa regions.

“As a church communion we are very well informed by our sisters and brothers throughout the country, and know what the suffering population most urgently needs. That’s why we are helping now,” he said during the September visit to communities affected by drought in Namibia and neighboring Angola.

Junge expressed appreciation for the ongoing huge response from the worldwide Lutheran communion, through which it had been possible to finance almost the whole of the first phase of the emergency relief for Namibia. He expressed his hope that through additional grants, the project could be extended to Angola too, which is severely affected by the calamity.

The current drought response by the LWF and Namibian churches’ will be implemented until March 2014. It also includes psychosocial support for households and advocacy to build awareness among community members about their basic rights.

The implementing partners point out that unconditional cash interventions unlike in-kind distributions, allow the targeted population to make choices and prioritize spending as households do not have the same needs and priorities even when affected by the same disaster. The current response will be accompanied by an impact assessment to allow for lessons learned for the future.

It Takes Courage to Work for Unity
news