Called to Accompany One Another 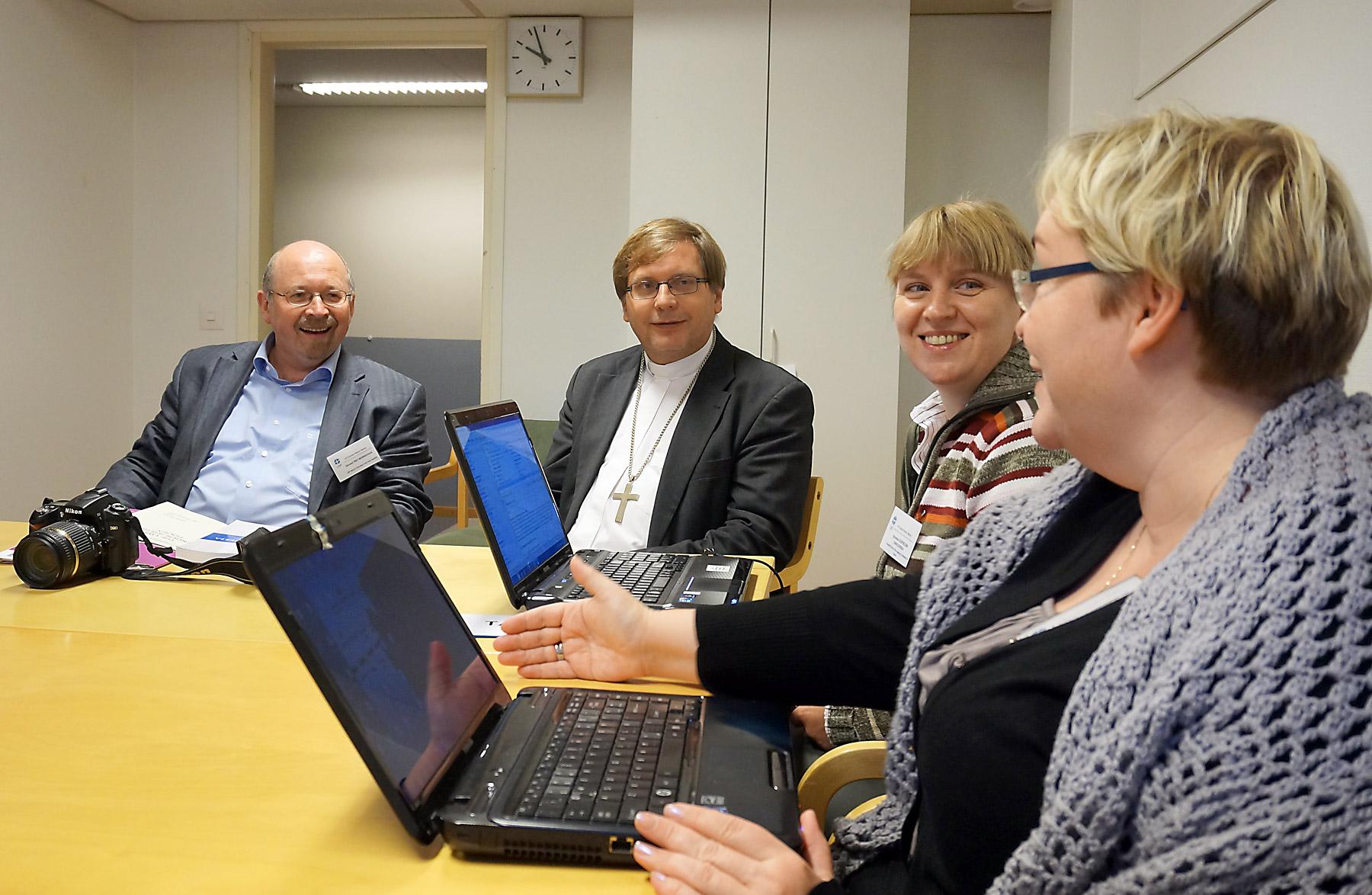 European Churches Aim to be a Voice of Hope

HELSINKI/GENEVA, 17 October 2013 (LWI) - Representatives of The Lutheran World Federation (LWF) member churches from across Europe meeting in Helsinki, Finland, agreed to strengthen their efforts to be a strong voice for hope, advocacy and diaconal service.

“We are concerned about the situation in the Middle East that challenges our churches to continue to pray for peace, and [about] climate changes taking place, affecting us all, but especially the poorest and most vulnerable,” they noted.

The consultation called to follow up on LWF themes and issues brought together Council members and advisors, National Committee representatives, ecumenical officers and regional coordinators of the LWF Women in Church and Society (WICAS) network. The Evangelical Lutheran Church of Finland hosted the meeting, which was organized by the LWF Department for Mission and Development Europe desk.

They shared possible plans for celebrating the anniversary, including a series of 14 animated stories on the Reformation from Hungary; and from Denmark, a “Luther beer” and Lego bricks to ‘construct’ Luther sites.

The LWF member church leaders highlighted the ongoing need for cooperation and dialogue between Roman Catholics and Lutherans and the importance of working together for the renewal of the Church and bearing common witness in a secularized society. They underlined the need to be informed about LWF’s plans and tools for the 2017 Reformation anniversary commemorations.

Learning from Each Other

While expressing thanks for the churches’ independence, the consultation affirmed the significance of togetherness and companionship between smaller and larger churches in the region and the common desire to learn from each other.

In his address focusing on “Claiming the Gift of Communion in a Fragmented World,” General Bishop Dr Miloš Klátik of the Evangelical Church of the Augsburg Confession in the Slovak Republic, noted that LWF member churches have responsibilities as autonomous churches, and as communion members.

“We are called to accompany one another, assess the complex implications of church decisions, and enhance interaction and bridge building,” Klátik said.

Speaking about the Gender Justice Policy, which was adopted by the LWF Council in June this year, Rev. Ulrike Hansen from Germany, WICAS coordinator for the Central Western Europe region, said the document serves as an instrument for the communion and its member churches to achieve equality between women and men and promote justice and dignity.

“The Gender Justice Policy is grounded in biblical and theological concepts. Today the question is how to move from having women present to the full participation of women,” Hansen said.

During regional discussions at the Helsinki gathering, LWF Council member Ms Dagmar Magold from Switzerland noted that churches in Central Western Europe face a big challenge in knowing how to assist immigrants and refugees.

“Churches intervene for these immigrants, but more often, public opinion is reacting critically to the welcoming of those people. We work together with other groups in society but it is difficult and tireless work to convince society to engage,” Magold said. “In the near future, churches will have to deal more intensively with the demographic changes.”

Hungarian Bishop Dr Tamás Fabiny, LWF Vice-President, said that maintaining a church presence in society in the Central Eastern European region is a challenge, but he added that the Reformation anniversary can assist, as it asks churches to articulate how they see themselves as Lutheran.

Presiding Bishop Helga Haugland Byfuglien, Norway, emphasized that for the LWF member churches in the Nordic region, relationships to the State are of central significance alongside the role of churches in secular society.

“For the big churches, the question is how to determine their specific functions in a secular and pluralistic society,” she said.

The Helsinki meeting was the first gathering of church leaders from the three LWF regions in Europe since the May 2012 European Church Leadership Consultation in Ostrava, Czech Republic.

Message from the LWF Europe Meeting