Burghardt: Churches called to be agents of positive change 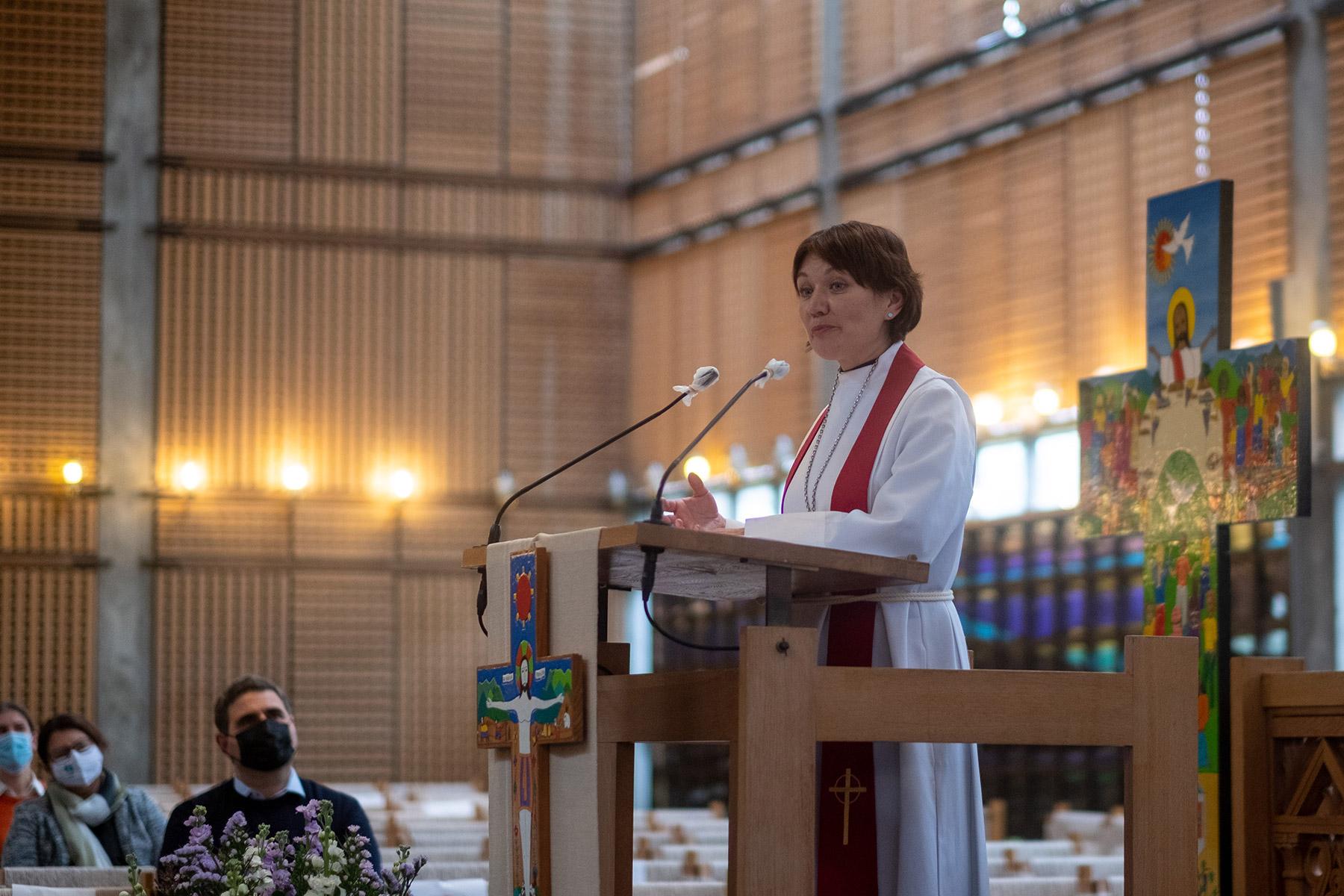 In her sermon, Burghardt reflected on the words of St Paul's letter to the Romans, urging Christians to be âtransformed by the renewing of your minds, so that you may discern what is the will of God.â Photo: LWF/M. Renaux

During installation service, LWF’s new General Secretary calls on churches to “walk the talk” for reconciliation

(LWI) - The Lutheran World Federation (LWF) President Archbishop Dr Panti Filibus Musa welcomed colleagues, members and friends from across the global communion of churches on 17 November for the installation of the new General Secretary Rev. Anne Burghardt. Speaking to those gathered online, as well as in the chapel of Geneva’s Ecumenical Center, he prayed that God may accompany her ministry as the LWF’s 9th General Secretary “so that its member churches grow together in communion and become ever more faithful to [God’s] will.”

Burghardt was elected by the LWF Council in June as the first woman and the first person from the Central Eastern European region to serve in this leadership position. Before taking up her post on 1 November, she was working as development director for the Estonian Evangelical Lutheran Church’s Institute of Theology in Tallinn and advisor to her church on ecumenical and international relations. The head of the Estonian church and LWF vice-president for Central Eastern Europe, Archbishop Urmas Viilma, together with the vice-president for Central Western Europe, Pröpstin Astrid Kleist, presided at the installation service alongside the LWF president.

In her sermon, Burghardt reflected on the words of St Paul's letter to the Romans, urging Christians to be “transformed by the renewing of your minds, so that you may discern what is the will of God.” Quoting from the first of Martin Luther’s 95 theses, she said that transformation has to do with repentance or metanoia in Greek, the changing of minds. Both as individuals and as societies at large, she said, we are called to repentance for selfishness, disregard for the dignity of other human beings, the exploitation of God’s creation, indifference towards the struggles and sufferings of others, as well as greed and the will to execute power over others.

In the midst of a complex world our vocation is to discern the will of God.

“Discerning God’s will for us here and today,” the new LWF leader continued, requires that “we […] listen to one another and the other sciences that help us to understand how human beings and the world around them function.” Emphasizing the importance of education, she stressed that “the world is not full of simplistic answers.” Such answers contribute to increasing polarization, she said, whereas “our vocation is to discern the will of God” in a complex world.

Contributing to the building of a more just, peaceful and reconciled world, Burghardt continued, “remains one of the relevant tasks of the church” in a world where “one can increasingly observe the push towards drawing up clear frontlines.” In today’s polarized world, she insisted, “where many new trenches are being dug, the churches are called to be agents of positive change and reconciliation.”

This commitment to peace, she added, must be genuine, authentic and “go hand-in-hand with the renewal of our minds.” We need to “walk the talk and talk the walk,” she said, otherwise “we will fuel cynicism.” For Christians, Burghardt said, the source of renewal, of true reconciliation and dignity is “Jesus Christ who has come to liberate us from brokenness and calls us to make the new creation visible in the midst of our world.”