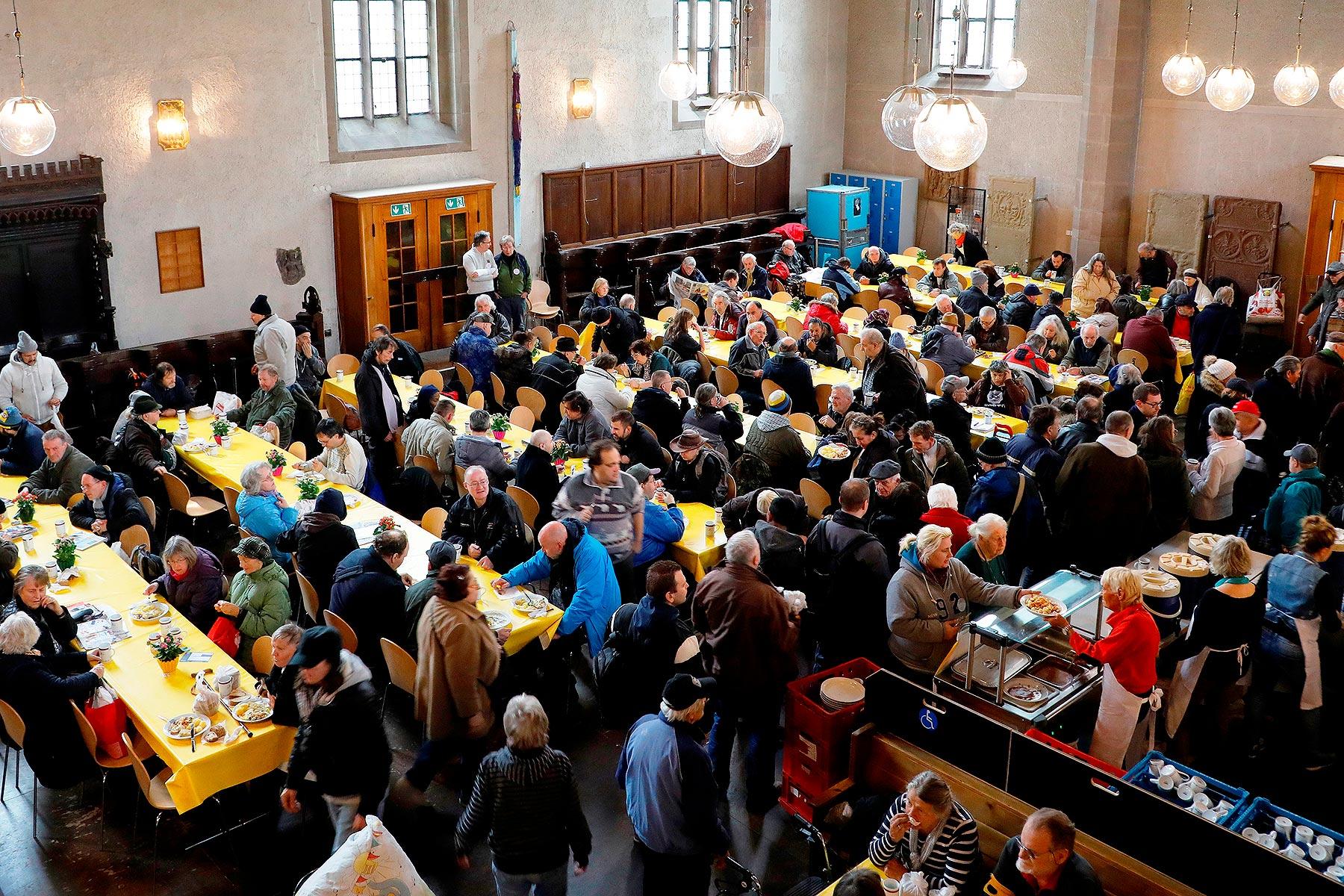 During the weeks of Vesper Church it is very busy in Stuttgart's St. Leonhardâs Church. Photo: ELK-WUE/Monika Johna

(LWI) - The COVID-19 pandemic “has clearly revealed the need for social protection for all people. It therefore challenges the churches to rethink our approach to building more just and inclusive societies.”

Taking part in an ecumenical consultation on ‘Nurturing the Social Contract’, organized by the Lutheran World Federation (LWF) and Act Church of Sweden (CoS), LWF’s Head of Global Advocacy, Isaiah Toroitich, stressed that the question of universal social protection is not only a key economic issue, but it is also a key human right. The 3 February online encounter explored the role of churches and faith-based organizations (FBOs) in helping to strengthen the social contract between governments and their citizens, especially in low and middle-income countries.

The consultation featured responses from Africa, Asia and Latin America to a new report published by Act CoS and the London-based think tank Development Pathways. Authors Stephen Kidd and Gunnel Axelsso Nycander, Act CoS’s policy advisor, noted that the link of trust between citizens and government is key to the development of peaceful and fair societies. They argued that the provision of universal social protection, in the form of accessible healthcare, education and social security benefits, is crucial for building that relationship of mutual trust.

Publicly funded social protection [is] a moral imperative and a human right for all.

Nycander pointed to a resolution from the most recent LWF Assembly in Windhoek, Namibia, which says that churches and FBOs “have a critical role to play in actively working for just societies and securing social protection for all.” The resolution also “affirms publicly funded social protection as a moral imperative and as a human right for all, and particularly for those that have been rendered invisible by current economic and development realities.”

Kidd traced the way that European nations developed public services and universal social security provisions to rebuild their societies in the wake of the Second World War. By contrast, he noted that a weak social contract leads to fractures and conflicts that can eventually result in failed states. Universal benefits for children, the elderly, the unemployed or the disabled are much more effective in tackling poverty than programs targeting the poor which invariably fail to reach those most in need, he insisted.

Responding to the report, Isobel Frye, director of the South African based Studies in Poverty and Inequality Institute, questioned its relevance to many countries in the global south, where, she said, deep mistrust between governments and citizens dates back to the colonial era. In her country, she added, the constitution guarantees social support for all but there is very unequal distribution. The government's ability to deliver on its promises is hampered by multinational mining companies that do not pay taxes but take vital resources and revenue out of the country.

Churches can change narratives on stigmatization

Annabella Sibrián from Guatemala said her country exemplifies the vicious cycle of low investment in public services, privatization of healthcare and education leading to resentment and protests against government corruption and “wealthy elites who don’t want to pay taxes.” Sibrián, who heads an international platform against impunity, said FBOs can change “narratives around stigmatization of the poor that leads to further inequality.” Churches, she insisted, must “maintain their prophetic mission, denouncing inequality and calling for a new social contract based on universal human rights.”

Rev. Philip Peacock from India noted the way that declining government investment in health spending over recent years in his country led to the collapse of public healthcare during the COVID pandemic. Peacock, the World Communion of Reformed Churches’ Executive for Justice and Witness and member of the New International Financial and Economic Architecture initiative (NIFEA), said the crisis began in 1991 when India signed up to the structural adjustment program of the World Bank and International Monetary Fund, forcing the country to cut public spending in order to receive loans. Churches, he added, must be “continuously critical” of states and institutions “to ensure that they act in peoples’ interests.”

Participants noted that during the pandemic, the wealth of the richest billionaires increased substantially, while those on the lowest incomes were hardest hit and continue to suffer as governments make further cuts to public spending. Uhuru Dempers, head of the social development desk for the Evangelical Lutheran Church in the Republic of Namibia, said that wealthy mining corporations in his country are failing to pay taxes and receive backing from investors in western nations. When the government tried to revise taxation on mining, he explained, Namibia’s prime minister “received threatening letters about the consequences of discouraging investors through unfavorable conditions.”