Breaking the silence to end AIDS 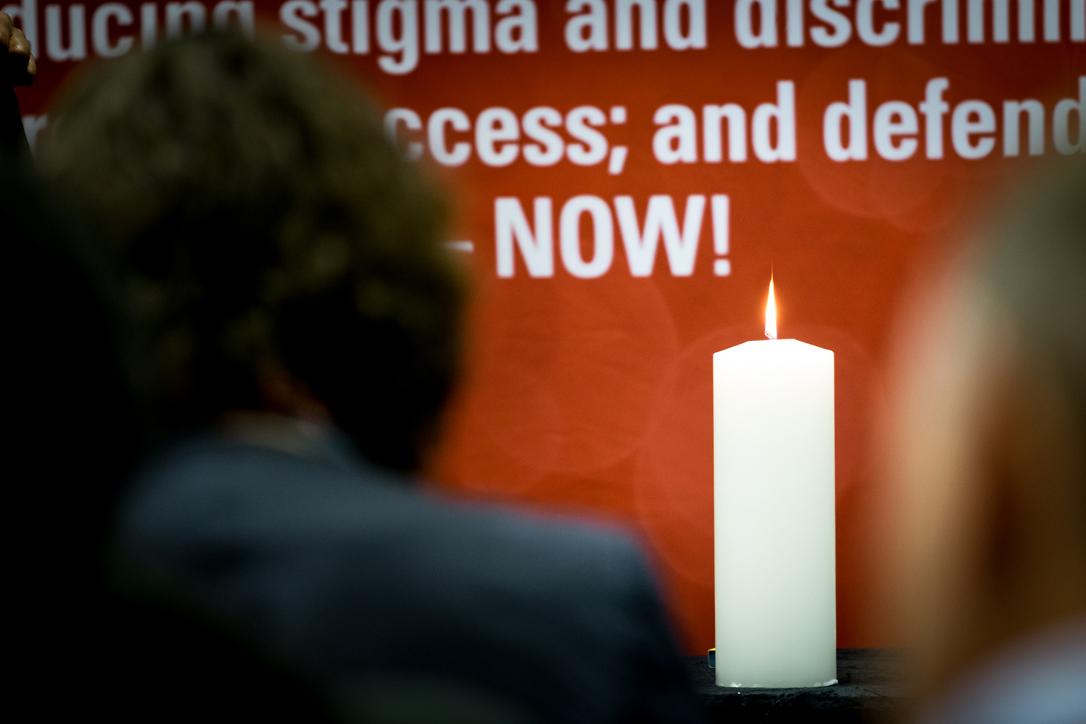 A candle is lit on the first day of Faith on the Fast Track, a meeting of faith organizations ahead of AIDS2016. Photo: WCC/Albin Hill

Religious leaders must walk the talk and play their part in reducing stigma and discrimination of people living with HIV and AIDS, says a Lutheran church leader with the virus.

Rev. Sibusiso Courtene Mosia declares openly that he is living a positive life. However, things did not come easy after he disclosed his status in 2010.

“After I shared my status, I was alienated and spent a year without a salary. I believe the more we talk about our HIV statuses and challenges the freer we become even from self-stigma,” Mosia, of the Lutheran Communion of Southern Africa, said.

He does not believe that the achievement of the 90-90-90 targets will be possible until religious leaders change their discriminatory attitudes.

Faith a key player in the fight against AIDS

Faith-based organizations have been meeting as Faith on the Fast Track ahead of the International AIDS Conference, the world’s largest meeting of AIDS professionals, and faith and civil society organizations.

Participants at a Faith on the Fast Track meeting suggested that breaking the silence includes addressing stigma, discrimination and the disparities that exist in church and community, and by openly talking about sex, a subject considered a taboo by most faith organizations.

“Churches should stop viewing AIDS as something that is out there,” Rev. Amin Sandewa, of the Evangelical Lutheran Church in Tanzania, said.

“I’ve been a minister for 25 years and have been positive for 22 years. I disclosed my status within a context that viewed HIV as a punishment for sin and I as a reverend, and thus a role model for perfect living, could not disclose a positive status.

“When my wife and two children died, I had no choice but to disclose my status to the church and they wanted to hide me.” He went four years without a station or a salary until he began working with an organization that offered him information about HIV and AIDS.

Both Mosia and Sandewa are Lutheran World Federation delegates to the conference and are members of LWF HIV networks in Africa.

Partnership with the private sector

Gabrielle Horton, an outspoken advocate for urban communities of color in Los Angeles, stressed that public-private partnerships are the way to go.

“Public-private partnerships for health benefits are the way to go if we are to match the urgency of the information on HIV and AIDS and fast-track the implementation of interventions with the necessary resourcing.”

The power of faith-based organizations for the common good needed to be leveraged. “When you tap into a faith community through sustained relationships, you are tapping into the soul of that community and helping to break the silence on various issues they may struggle with.”

Another way of breaking the silence on AIDS was to keep using empowered religious leaders, willing to acknowledge and address health and social realities on the ground. Partnerships that reach out to like-minded people and organizations to form networks of action are also needed, Horton said.

Adapted from a report by the World Council of Churches

Faith on the fast track